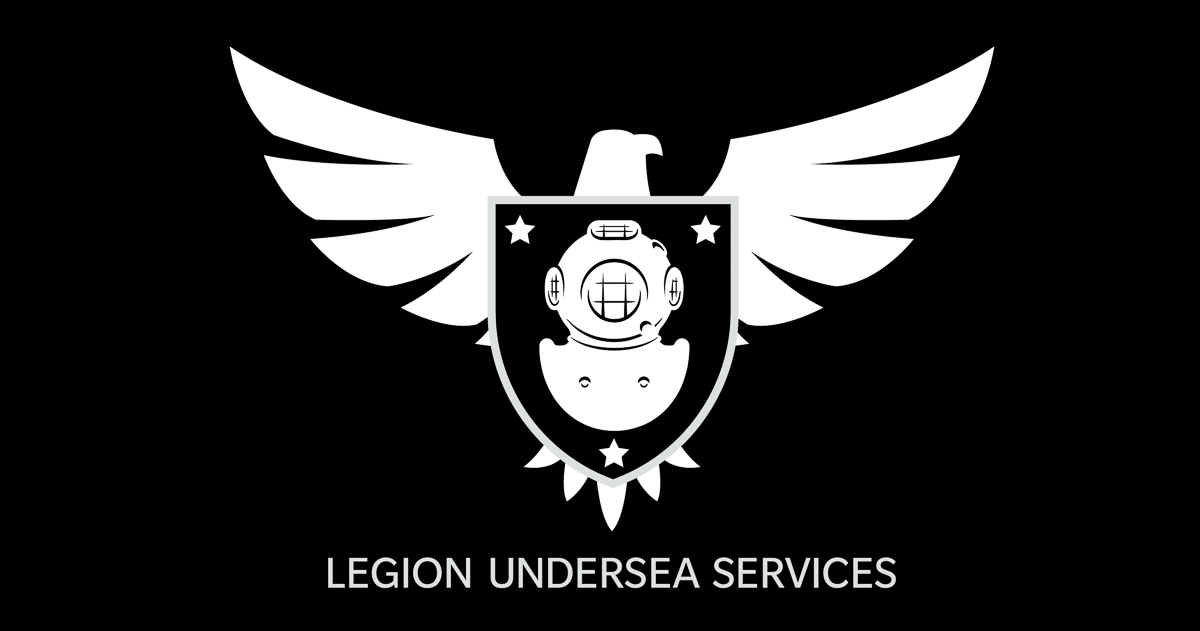 Project Recover is pleased to announce a partnership with Legion Undersea Services. They will work with Project Recover in the recovery of MIAs from underwater crash sites around the globe.

Legion Undersea Services is a veteran-owned commercial diving company that combines the military precision and code of honor with surface-supplied expertise they learned as deep-sea divers in the US Navy. John Marsack and Nick Zaborski, co-founders and managing partners, are both 23-year Navy veterans. While the majority of the divers with Legion have served on at least one MIA recovery as a Navy diver, this is a first for Legion Undersea Services.

“We believe their decades of experience and expertise as Navy divers will significantly expand Project Recover’s underwater capabilities while adding a higher level of safety. Our partnership will lead to more opportunities to partner with DPAA and directly result in the return of our Nation’s MIAs,” said Derek Abbey, Ph.D., Project Recover President.

“There is no higher honor than helping to bring American heroes home, “ said John Marsack, Legion Undersea Services co-founder and managing partner. “Our mission demands that we work as a team that refuses to quit until the job is done, until we bring them home..”

“Doing this type of mission in the past was the highlight of my career as a Navy Diver, as it was for many others on our team,” said Nick Zaborski, Legion Undersea Services co-founder and managing partner.

Project Recover and members of Legion Undersea Services have had overlapping missions before this partnership. Co-founder Nick Zaborski was a diving supervisor on the final recovery mission for a B-24J piloted by 2nd Lt. Jack S. M. Arnett (the Arnett B-24) in 2008.

“Every diver wanted to be on that mission,” Nick recalls.

“Dr. Eric Emery posted a black and white photo of the B-24 crew on the dive platform just before our first dive,” he said. “We all just stopped dead in our tracks and stared for a moment. I remember thinking ‘Wow, these guys look a lot like us.’ It really put into focus why we were there.”

The team was driven with an even greater sense of purpose. They wanted to find every MIA and would not rest until they had done so.

The team of Navy divers had learned that one of the MIA’s family had made contact with Project Recover years previously and had been tracking the search and recovery. In accordance with our agreement with DPAA, Project Recover does not publicly share information about MIA search or recovery missions.

However, if a family inquires, Project Recover is at liberty to discuss research and findings. That was the case with the surviving son of SSgt. Jimmie Doyle.

Tommy Doyle, son of SSgt. Jimmie Doyle, was nearly two years old when his father was killed in action. However, some in his family believed that his dad had survived the war and started a new family elsewhere. In his sixties then, Tommy had spent his entire life under the shadow of a doubt.

He and his wife reached out to Pat Scannon in 2000. Tommy had gotten his scuba diving certification and dove on his dad’s crash site with the Project Recover team by his side.

The team knew Tommy was waiting for news. They knew he’d been waiting a lifetime to hear it. They wanted to find his Dad for him.

“Having a mission in life is what gets me out of bed in the morning. It holds me accountable. It hones my attention to detail. It tells me my team is counting on me. It demands that I get back up after I’ve been knocked down. It points out that it’s going to get harder before it gets easier. It makes me work long hard days after long hard nights. It gives me the honor of flying halfway around the world to bring American heroes home. And what higher honor can one have than that?” said John Marsack.

Along with the expertise, equipment, and experience as deep-sea divers, Legion Underseas Services has a relentless commitment — a code of honor to go the distance to get the job done no matter what — mirroring our own that creates an ideal partnership.

Toward the end of the MIA recovery of mission in 2008, the divers still had found no evidence of SSgt. Jimmie Doyle. Dr. Emery asked them if they would be willing to stay a little longer, work a little harder. They were.

Nick was one of the divers who thoroughly searched the tail section of the B-24 for SSgt. Jimmie Doyle, but had found nothing. He did not know Jimmie had been asked to serve as the nose gunner less than a month before his final mission.

On one of the last dives, Nick was in the cockpit. He began brushing away sand and silt and found navigator tools. Then they found a flak jacket. Eventually, the team dredged the area with a vacuum hose. They filled a salvage basket with 8,000 pounds of sand to excavate.

The team hoisted the basket up. When it came to rest on the deck, Dr. Emery flipped open the cover. There on the top was a single dog tag. He turned them over. They read: DOYLE, JIMMIE. The divers were jubilant.

Though Legion Undersea Services is a commercial diving company with a rapidly growing list of accomplishments, John Marsack and Nick Zaborski identify most strongly as deep-sea divers.  Their mission encompasses both the expertise and equipment of surface-supplied diving as well as a fierce sense of commitment to the mission.

“Being able to dedicate ourselves towards this type of mission again in service to the fallen and their families is an honor beyond words. It’s going to come in the form of a lot of hard work, but that’s what we do, and we wouldn’t have it any other way,” said Nick Zaborski

“When I was told an organization exists with underwater MIA recovery expertise and experience, I realized our partnership with Legion Undersea Services would create a like-minded team unique for accomplishing our missions. It is going to be a privilege to work side-by-side with Legion who have done this before and who understand our mission’s significance,” said Pat Scannon, M.D., Ph.D., Project Recover co-founder.

Sometimes the full impact of our MIA’s final mission is invisible until it makes itself known in some profound way. Project Recover ‘flies’ a flag from the Arnett B-24 MIA recovery mission in 2008 on our website every day.

Jules McManus, a diver with the US Navy at the time, was selected to be in the photo because his family has an MIA who was repatriated. Chief Petty Officer Roland Robert Pineau was MIA from the Vietnam War until JPAC located, identified, and returned him to his family and country in 2007.

The underwater flag has been a part of Project Recover’s imagery for five years. It has taken our partnership with Legion Undersea Services to bring the stories behind it into the light again. However, Jules McManus and his second cousin, Roland Pineau, have been there all along; symbols of our MIAs’ greatest gifts given to family and country in their final mission home: gratitude, love, unity, and hope

Jules McManus is in a wheelchair now due to service-related injuries; an intersection of honor and sacrifice. He is no longer able to dive independently. His brothers-in-arms are still his brothers, and Nick and John look forward to setting up a dive for him this fall.

The impact of the MIAs on their families and country is their final mission, and it is our mission, too.

Legion Underseas Services was founded in 2018 by John Marsack and Nick Zaborski, veteran US Navy deep-sea divers, who were inspired to start a commercial diving company blending their expertise with the same core values and work ethics as their military diving experience. They have recently taken part in projects both offshore and inland, such as a reef rehabilitation for the US National Park Service, US Army Corps of Engineers infrastructure projects, archeological surveys, marine construction projects, various salvage projects, and serve clients ranging from tucked-away marinas around the US to Fortune 500 companies.

“The extraordinary individuals at Project Recover, who have dedicated decades to this cause, entrusting with us with this partnership leaves us with a fierce sense of commitment, in addition to great enthusiasm at the thought of how much we will accomplish together.” -Nick Zaborski

Project Recover is a collaborative effort to enlist 21st-century science and technology in a quest to find and repatriate Americans missing in action since World War II, in order to provide recognition and closure for families and the Nation. Project Recover has helped repatriate 15 MIAs and located 80+ that are awaiting recovery. To date, Project Recover has conducted 60+ missions in 20 countries and territories, locating 50+ aircraft associated with 170+ MIAs. In an agreement with DPAA, Project Recover begins MIA recovery efforts in 2021.