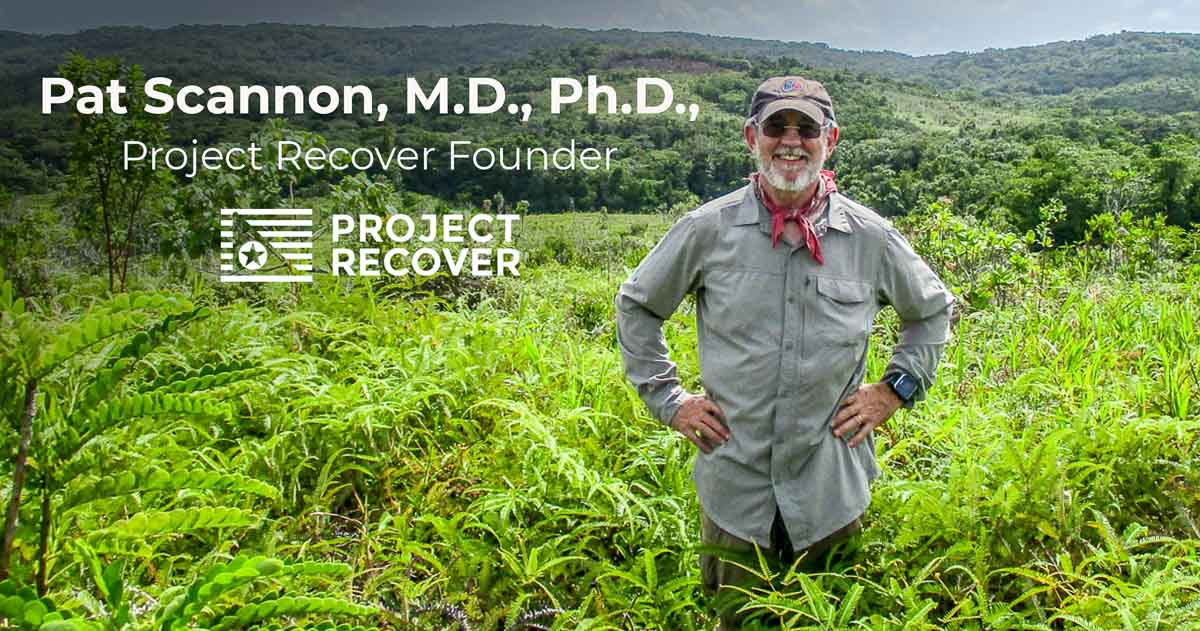 Pat Scannon founded Project Recover, formerly BentProp, after a trip to Palau in 1993. He and his wife, Susan, a dive-instructor, were invited there to help locate the Japanese trawler George H.W. Bush sunk in 1944. They found the trawler more quickly than expected and documented it had been an armed vessel.

After the rest of the dive team left, Pat hired a guide to show them other artifacts from World War II. It was then that Pat first saw the 65-foot wing of an American B-24 bomber lying in shallow water along a coral island in Palau. Other than leading him to it, the guide could give Pat no information about the wing. For Pat, the wing was more than a hunk of metal. It represented a forgotten battle and brave men who had fought and died there. It represented stories lost to the chaos of war, the annals of time, and the secret stillness of a watery grave. All were stories unknown to the airmen’s families.

This moment marks the inception of The BentProp Project which is now known as Project Recover. At that moment, however, there was no name; only a feeling. Pat felt determined to find the rest of the plane and, with it, the stories of the young men lost there that day. Pat is aware that, even now, this may sound strange, even absurd, to others. After all, if no one had found the aircraft or remains for the previous 48 years what made him think that he, with no relevant expertise, could or should? However, this was not the first time his inner guidance prompted a sharp turn toward a higher goal – nor would it be the last.

Pat is one among few who have earned a Ph.D. and then, separately, an M.D. His passion for both chemistry and medicine goes back to his childhood roots. His father was a US Army Colonel and his Romanian-born mother went to medical school in Leipzig during World War II. Pat spent memorable years growing up in post-war Europe. As a boy, he had three passions. First, he loved camping and the Boy Scouts. Second, he spent countless hours building model airplanes. Third, he was captivated by a chemistry set he received as a Christmas gift from his father when he was just ten years old.

A few months before his graduation, Pat realized the potential of using his chemistry training in medicine during an era pre-biotech and decided to apply to medical school. He returned to his home state and spent the second half of the 1970’s earning his medical degree from the Medical College of Georgia. Pat is a board-certified physician in Internal Medicine. He completed his residency and fulfilled his military duty as a major at the Letterman Army Medical Center and the Letterman Army Institute of Research on the Presidio of San Francisco.

When Pat saw the B-24 wing in Palau in 1993, he was just beginning his second decade as the Founder and Chief Scientific and Medical Officer of XOMA. Pat founded XOMA in the early 1980s to develop therapeutic monoclonal antibodies for human use. He is the inventor or co-inventor of numerous patents, as well as co-author on numerous scientific publications. Pat retired as the XOMA’s Chief Scientific Officer in 2016.

Simultaneous with his missions to find MIAs, Pat Scannon served in multiple advisory positions to the US government on biotech issues. He served for 15 years on the Defense Sciences Research Council, part of the Defense Advanced Research Projects Agency (DARPA). His work there concentrated on rapid national responsiveness to attacks of bioterrorism. He also served on the Department of Defense’s Threat Reduction Advisory Board for seven years, the National Biodefense Research Council for five years, as well as on the Research Committee for Infectious Diseases Society of America for three years.

By 2001, Pat had assembled an all-volunteer team conducting missions as The BentProp Project. Most of the members of Project Recover’s Board of Directors joined Pat in those early years. Dan O’Brien started in 2001. In 2002, Val Thal-Slocum, then a pilot with Fed-Ex(2002-present), and the late Flip Colmer, a retired U.S. Navy F-18 pilot working for Northwest (later Delta) Airline (2002-2019), joined the team. Derek Abbey, Project Recover’s current President, met Pat at a USMC VMF-121 reunion and joined the team in 2004.

In their first 20 years of operation, The BentProp Project conducted 20 field missions, identified and documented more than 50 US and foreign aircraft on land and underwater. These US aircraft are linked with at least 26 MIAs. During these years, The BentProp Project voluntarily shared all its results with the Department of Defense’s Central Identification Laboratory, Hawaii (CILHI, which grew into the Joint POW/MIA Accounting Command (JPAC), known today as the Defense POW/MIA Accounting Agency (DPAA). As a result, this DoD agency mounted several MIA recovery missions and repatriated several Americans based on BentProp’s findings.

Pat stewarded The BentProp Project through its evolution into the organization it is today. Project Recover is a 501c3 in partnership with SCRIPPS Institution of Oceanography at the University of California, San Diego, and the College of Earth, Ocean, and Environment (CEOE) at the University of Delaware.

The journey from The BentProp Project to Project Recover started with a chance meeting in 2012. While on a mission in Palau, Pat met Dr. Eric Terrill, Director of Coastal Observing Research and Development Center at Scripps Institution of Oceanography (SIO), and Dr. Mark Moline, now Director of The School of Marine Science and Policy at the University of Delaware (UDel). Mark and Eric were conducting fieldwork with their autonomous and remotely-operated underwater vehicles. Soon the three realized the innovative marine technologies could help refine and speed The BentProp Project’s search for MIAs, while also adding a real-life application for their underwater technologies.

The single wing of that first B-24 in the water captivated Pat Scannon. Since then he has driven to bring recognition to MIAs and closure to their families. It is a vision he has lived into creating. Since 1993, Pat and the team have located many aircraft. When they do, the team conducts a flag ceremony on a boat over the crash site or on land adjacent to the crash site. A flag is folded in recognition of each of the service members associated with the aircraft. The flag is then held in safekeeping until the family has been notified that their family’s MIA had been located.

Once the family is informed, Pat and other members of the team offer to deliver the flag to the family with gratitude and condolences.  As he intuitively knew when he saw the B-24 wing in 1993, Pat understands he is touching on grief and sacrifices that the family has carried for nearly a century. He is humbled by these families’ sacrifice and honored to hand them a ceremonial flag folded at their MIA’s resting place at the time of discovery.

Pat has been committed to helping to bring MIAs home for more than 26 years. Through his focused determination, he has built a team.  Since 2013, the Project Recover team has identified numerous US and foreign aircraft linked with more than 80 MIAs. Many families now know more than they ever did about their family’s MIA. As of this writing in 2019, Project Recover’s collaboration with DPAA has resulted in 8 US servicemen being accounted for and repatriated to their families in the United States.