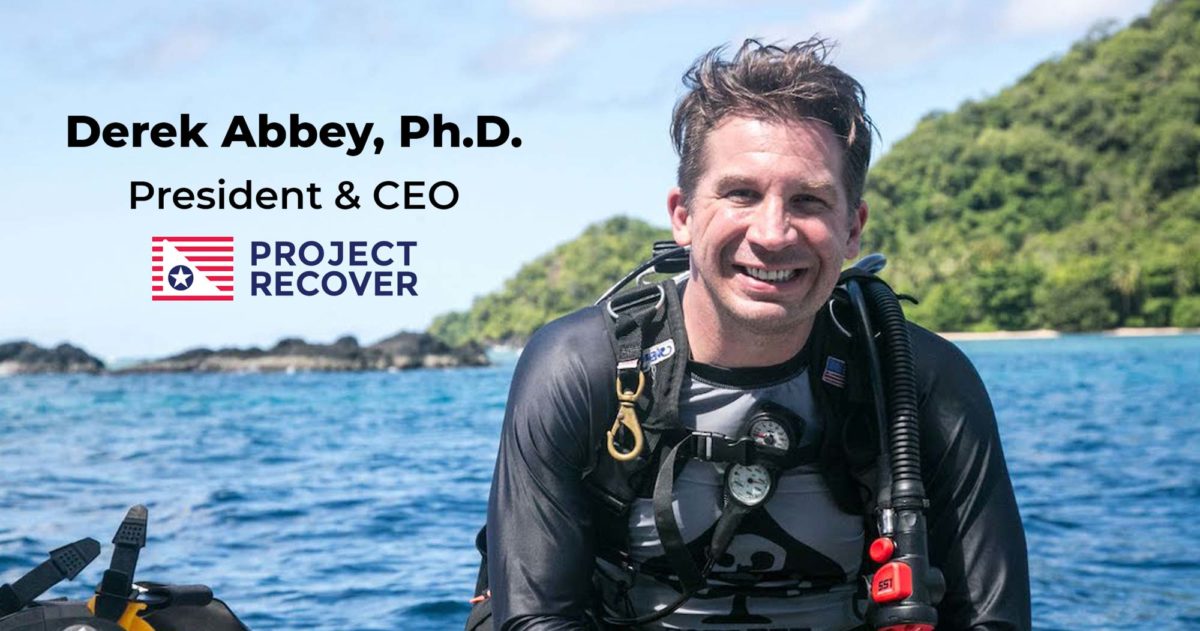 Derek Abbey, Ph.D. is Project Recover’s President and CEO. He served for 23 years in the United States Marine Corps. His academic research and his post-military career have focused on connecting veterans with college opportunities, He began as Project Recover team member in 2004 and spent five years on the Board of Directors before being appointed as President / CEO.

Derek Abbey grew up in Seattle. He was the only child of a single mom doing the best she could to raise a “rambunctious boy.”  Her unexpected death when Derek was 13 turned his life upside-down. For four years, he lived primarily with his aunt and uncle. Finally, at 17, Derek ran away to the Marine Corps.

“Surprisingly, the Marine Corps was exactly what I needed,”
said Derek Abbey.

Derek Abbey had been without a rudder and sail for most of his life. In the USMC, he found a structure and system he could succeed in.

First, he enlisted in the Marine Corps as a communicator. After his initial enlistment, the Marine Corps selected him for a commissioning program and sent him to Oregon State University to earn a degree. Upon receiving his degree he was commissioned as a ground officer. Finally, Derek was selected for an aviation contract while completing the six months long Basic School.

This combination of events, going into the military and then to college, set the stage for Derek’s academic and professional accomplishments. It also is the seed that gave rise to a passion for connecting veterans with educational opportunities. It is also, of course, the precursor which led up to his current role with Project Recover.

“I faced a lot of challenges in my childhood which gave me the grit to overcome obstacles,”
said Derek Abbey.

Derek Abbey attended flight school in Pensacola FL and graduated as a Naval Flight Officer. He was then sent to the F/A-18 Hornet Fleet Replacement Squadron at MCAS Miramar where he earned his designation as an F/A-18 Weapons Systems Officer. He was then immediately assigned to his first squadron, VMFA(AW)-121, and deployed for Operation Southern Watch and Operation Iraqi Freedom.

Over the next few years, he deployed two more times to Iraq and once to the Far East. He holds more combat hours in the Hornet than hours in peaceful skies. After an extended and successful tour in the Hornet, Derek left flight operations to become a Plank Owner (original member) at Marine Corps Special Operations Command as the Air Officer for the 1st Marine Special Operations Battalion, now 1st Raider Battalion.

During this period with the Marine Raiders, he served in Marine Special Operations Company Delta and was deployed to Afghanistan in support of Operation Enduring Freedom as their Forward Air Controller, Special Operations JTAC, and Executive Officer.

“I truly believe the military saved my life,” said Derek Abbey who said he faced multiple challenges growing up.

In 2009, Derek was selected by the Marine Corps for the Advanced Degree Program and assigned to the University of San Diego.

“In 2009-2011, there was a huge influx of military into higher education. Universities were figuring out how to work with these populations.”

While earning a Masters in Higher Education Leadership, Derek conducted research on how universities and colleges work with military-connected students on their campuses. His thesis provided best practices for colleges to use in creating successful military programs on their campuses.

In his twilight tour from 2011-2014, Derek served as the Director of the Marine Corps’ Train the Trainer School in Camp Lejeune, NC. His organization was responsible for the training and education of instructors, curriculum developers, staff and leadership of 93 training units across the Marine Corps.

Derek retired from the USMC as a Major in 2014. Shortly thereafter, he began his doctorate in Leadership Studies at the University of San Diego. Derek focused again on conducting practical research that would help make higher education more accessible to veterans, the majority of whom would be first-generation college students. His research has garnered national attention and resulted in multiple speaking engagements. Derek earned his Ph.D. in 2019.

“One of the biggest things about my childhood is that my mother didn’t graduate high school. Now I have a Ph.D. When I start getting lofty, I remember my roots. It keeps me grounded,”
said Derek Abbey.

Upon retiring from the Marine Corps, Derek began working at San Diego State University as a Military Liaison Officer in the Joan and Art Barron Veterans Center. In this position, he focused on outreach to the military-connected students in the region in order to provide guidance for them attaining their higher education goals.

In 2015, he took over the Military and Veterans Program at The University of San Diego.  During his time with USD, he created and implemented programming that resulted in the growth of the military-connected population by 30% and the program being recognized as one at the top in the nation. Derek was the advocate for this population not only at USD but on other campuses in the region through the Military Ally program and with organizations across the nation attempting to provide better educational guidance for the military population.

In 2017, Derek took over West Coast Operations for the Travis Manion Foundation (TMF) as the Senior Director of the West and Northwest Regions. TMF is a veterans service organization that works to unite the American community through programming that emphasizes the value of strong character. In this role, he oversaw the strategy development, program implementation and expansion, budget execution, and evaluation in TMF’s largest geographical region.

In 2018, Derek was invited back to SDSU to take the reins of the Military and Veterans Program. As the Director of the Joan and Art Barron Veterans Center, Derek led one of the nation’s largest and most visible university programs serving the military population.

In 2019, he was selected as a participant of the George W. Bush Stand-To Leadership Program.

Derek Abbey met Pat Scannon in 2004. Shortly afterward, he was invited to be a member. Due to his back-to-back deployments at the time, it took a couple of years before he could go on his first mission. When he did, it was to Palau. On his first mission, he helped locate an aircraft whose pilot was a member of the VMF-121 was Derek’s Squadron as well.

Derek spent five years on the Board of Directors before he was appointed Project Recover President / CEO.

“I believe in our mission. We serve the MIAs, their families, and the entire American community,”
said Derek Abbey.

Derek has staked his reputation on using a values-centered approach to, well, just about everything

“I’ve developed a reputation as someone with a values-approach and whose actions are genuine.”

He is invited to participate, lead, and speak at multiple events around the country. As long as it is something he cares about and aligns with, he will put energy into it. Of course, that may change somewhat as the responsibility of being Project Recover President takes up more of his time.

Derek is married to Michelle and has an adult son, Wesley, who is a software engineer in Boston. In his personal time, Derek enjoys the outdoors with his wife Michelle. He is currently in the process of attempting to run a marathon in each state and visit all of the US National Parks.