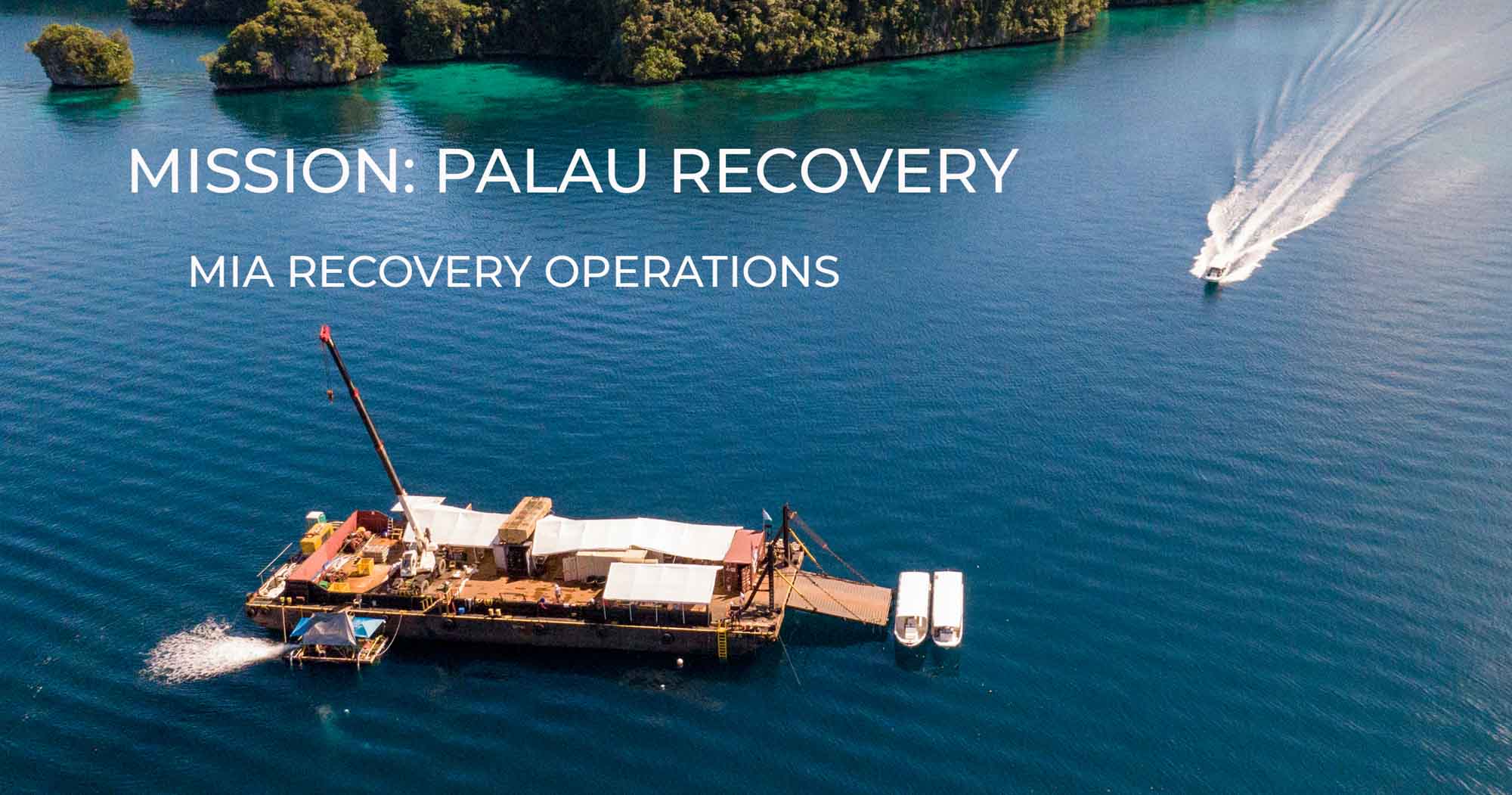 In August 2021, the Project Recover team set off for its first MIA Recovery Mission in the Republic of Palau. Our partnership with the Defense POW/MIA Accounting Agency made this a groundbreaking mission. The goal was to recover MIAs from a World War II crash site 130’ underwater.

It was a complicated mission. The team consisted of more than 20 people. Among them were:

Building the Base of Operations on the Barge

Project Recover’s first task was to turn a 120’ barge into a base of operations for the MIA Recovery Mission. Fully configured, the barge had workstations for:

The team established a daily routine that governed the month-long mission.

The mission drew many passionate and hardworking volunteers from the military population in Palau. Sgt. Juan Pocaigue was among them. Sgt. Pocaigue is from the NCOIC Oceana Engagement Team as a part of the US Indo-Pacific Command based in Palau. He is now a Project Recover team member.

In March 2022, Admiral John C. Aquilino visited the site of Project Recover’s MIA Recovery Mission. He laid a wreath on the water over the crash site. Sgt. Pocaigue was honored to play Taps for the ceremony.

The President of Palau, Surangel Whipps Jr., and the US ambassador, John Hennessey-Niland, paid a visit to the site of the MIA Recovery Mission in Palau.

Drew Pietruszka spent time briefing them on the missions’ archaeological operations. Nick Zaborski and John Marsack Legion Undersea took them on a tour of their surface-supplied diving operations.

Project Recover’s friendship with the Whipps dates back to 1993. At that time, Pat Scannon was part of a team that found the Japanese trawler sunk by President George H. W. Bush in WWII. The Republic of Palau, preparing for the 50th Anniversary of the Battle of Peleliu at that time, was very interested in their search. President Whipps’ father, former Speaker of the House, dove with Pat on the Japanese trawler.

Our article would not be complete without acknowledging Diver Supply, Inc. for its contribution to the success of Project Recover’s MIA Recovery Mission. Diver Supply rented a recompression chamber to the mission at 30% of their standard rate.

“We are thankful to the people who gave us freedom and kept war out of the United States,” Robbie Mistretta, Vice President of Diver Supply, said about their contribution. “We have freedom because of them, and it wasn’t free.”

Mistretta honors those who serve. His brother, Eric P. Mistretta, was killed in action in Vietnam. Both his father and uncle served in World War II.

Destry Faidley, Diver Supply’s Sales Manager, has been a commercial diver since the 1970s and is an expert in the field. If Legion co-founders, former US Navy divers, had questions about equipment, parts, or functional operations, they asked Destry.

“He was integral to the mission’s success,” said John Marsack.

Surface-supplied divers require longer to decompress from dives. The recompression chamber allows divers to ascend more quickly, enter the chamber, recompress to depth, and slowly and safely there instead of underwater.