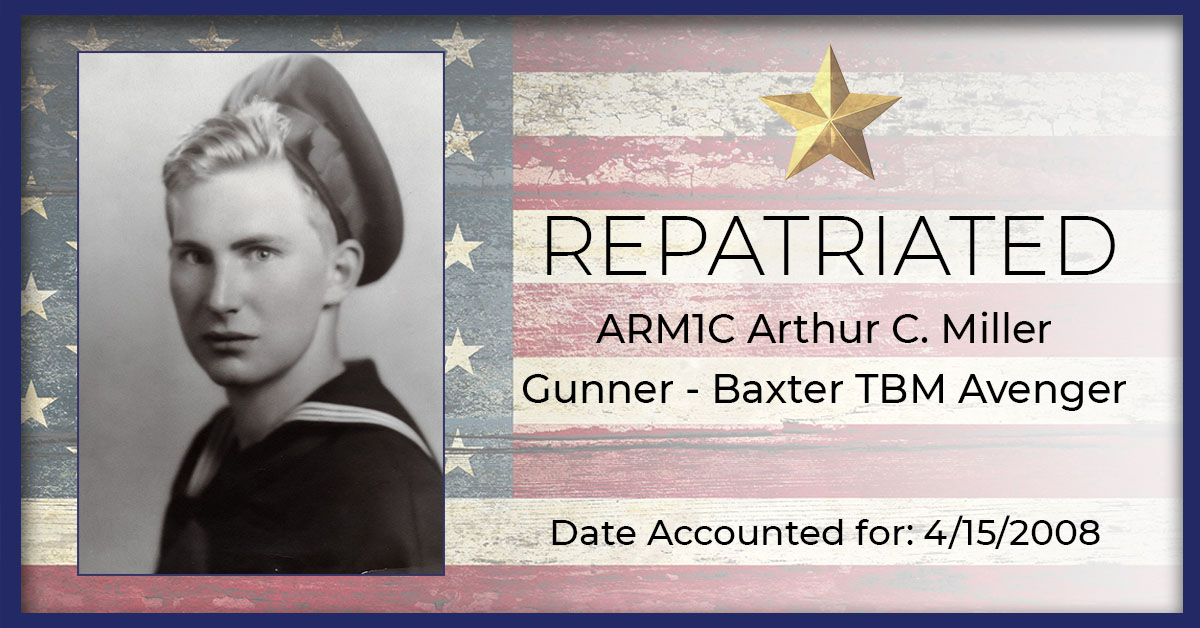 ARM1c Arthur C. Miller was accounted for by the Defense POW/MIA Accounting Agency. Project Recover identified his downed TBM Avenger in 2003 and is honored to play a vital role in the return of ARM1c Miller to his family.

Project Recover humbly acknowledges ARM1c Arthur C. Miller’s service and sacrifice, as well as the enduring loss to his family. We are grateful and honored to play a vital role in bringing him home. The repatriation of ARM1c Miller helps resolve generational grief and awaken us to gratitude, hope, love, and unity. This is the legacy of our MIAs and their final mission.

ARM1c Arthur C. Miller was the gunner on a TBM Avenger piloted by ENS Donald E. Baxter. The Avenger launched off the USS Enterprise for a bombing mission over Peleliu airfield on Peleliu Island on September 13, 1944. The Avenger was hit by anti-aircraft fire on the steep approach to the airfield.

The crash site was generally known but was not positively identified until Project Recover located a data plate with the TBM Avenger make and model on it, in 2003.

The remains were given to AOM2c Stuart’s mother. Mrs. Stuart did not believe the remains were those of her son. She felt compassion for the man and the family to whom he did belong. For this reason, she accepted the remains and had them interred in the Stuart family mausoleum.

After DPAA completed a recovery mission at the crash site in 2005, and were unable to find any remains, the sister of Wesley Stuart decided to have the remains tested. She paid $11k for private DNA testing to identify the remains. Stuart’s mother had been correct. The remains were not those of her son. They were identified as belonging to ARM1C Arthur C. Miller.

The remains were returned to their rightful family. ARM1c Miller was buried the following month beside his mother in Poughkeepsie, NY.