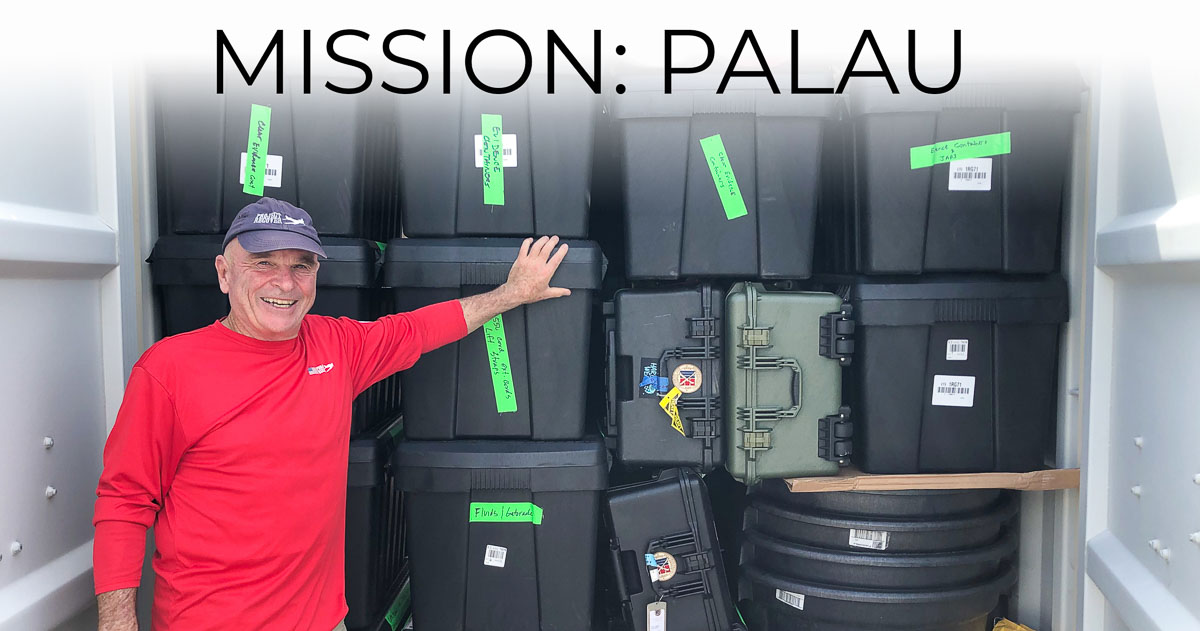 Project Recover met with Legion Undersea Services to pack for our first MIA Recovery Mission in Palau later this year.

Our team members who went to Florida to spend the weekend packing for Palau were:

Legion Undersea Services principles were there to pack for the team:

Let me begin by saying we are thrilled to embark on our first MIA Recovery Mission. Until recently, Project Recover focused exclusively on MIA Search Missions. In those missions, we search for underwater crash sites associated with MIAs. Once we find a crash site, we document the site and turn all the records over to DPAA for recovery and identification.

In  2020, however, Project Recover signed an agreement with DPAA to recover MIAs. This marked the beginning of expanding our MIssions to include MIA Recovery.

Currently, there are 80+ MIAs associated with crash sites Project Recover has located. This is the first of what we hope and plan to be many successful recovery missions.

Several team members spent a couple of days in Oakland, Florida, packing for the MIA Recovery Mission. Not the normal gear like toothbrushes and headlamps.

“This was the most intensive planning we’ve had to date,”

Especially in a remote country, the team has to be prepared for every goal and every contingency.

“We have to plan to be entirely self-contained for the duration of their three-week MIA Recovery Mission in Palau. That means all of the equipment, materials, and needs for a recovery mission. We also have to plan for every contingency knowing that we can’t go to the corner store to pick up the bolt we forgot or pick up a part that broke. it’s an exponential factor of ten,” said Dan.

To recover MIAs, the team needs the equipment, tools, and supplies for:

Packing for an MIA Recovery Mission is a mission unto itself. Project Recover and Legion Undersea Services had two steel cargo containers to fill. The first, a 15’ container, holds one piece of equipment: the divers’ decompression chamber.

The second, a 20’ container, holds everything else. Things like:

“We had to play Tetris to make it all fit,” said Adam.

“I don’t want to say we planned it perfectly, but let’s just say we couldn’t have fit another breath of air in that thing!” said John Marsack after they closed the container.

While Dan was planning, preparing, and packing for every goal and every contingency, Nick and John were busy designing a completely new diving system, to maximize their workday efficiency.

There is a lot of thought that goes into preparing and packing for an MIA Recovery Mission. With tremendous effort and under tight time constraints, Legion developed a system with multiple air compressors that can run constantly and supply a steady flow of air to divers at depth as well as to divers in the recompression chamber decompressing from the last dive.

After weeks of stress testing the system and making improvements, Nick and John broke it all down and packed it up for shipment.

The equipment is currently making its way across the Pacific.

“We’re anxiously awaiting the day we get to break open that shipping container and start setting up our equipment to do the task it was designed to do.,” Nick said.

Legion is especially grateful to Divers Supply, Inc. in Louisiana, and especially to Rob Mistretta, Vice President of Diver Supply, who went above and beyond to help the project succeed.

Forming a Partnership in Real Time

Project Recover team members got a chance to meet and work with Legion Undersea Services for the first time packing for Palau MIA Recovery Mission.

Nick and John are former US Navy deep-sea divers who are very familiar with MIA Recovery missions. Three-quarters of Legion Undersea Services have participated in an MIA Recovery Mission before. Some worked on recovering MIAs associated with the Arnett B-24, a crash site Project Recover located which led to the repatriation of 8 MIAs.

“Working side-by-side and putting energy into forming the partnership in real-time is incredibly important. Every word, every action sets the stage for the rest of the mission, ”

Packing for Palau: Not Glitz and Glam

“Packing the cargo container is not the glitz and glam of going to Palau or Italy, but it still has to be done, it’s an integral part of the process,” said Adam Gray.

“Adam has been with the team for a couple of years. When he shows up, he is 100% in. It was inspiring to see that kind of work ethic and helps us focus on what we are doing and why we are doing it,” said Harry.

Reflecting back to when his uncle ARM2c Albert ‘Bud’ Rybarczzyk was repatriated, Adam said, ”It is so refreshing to see the community come together. It validates the overwhelming majority love this country and keeps me positive.”

“Sometimes civilians romanticize war. Seeing the wreckage, I began to imagine the morning they got on the plane, the smells, the hot metal, the hydraulic fluid.,” Adam said. “Every bit of freedom we get to enjoy was paid for by men and women who serve.”

Col Dahl is a veteran, an aviator who flew a P-38 in World War II, and multiple other aircraft in Korea, and Vietnam, and is a family friend of Dan O’Brien. Dahl became an Ace pilot in World War II and is credited with destroying nine enemy aircraft. He retired from the US Air Force in 1975.

Dahl embraced retirement with the same fervor he served his country. He bought a motorhome, a Jon Boat, and all the fishing and scuba gear he would need to keep himself and his wife happily entertained through decades of retirement.

“It was a real thrill to meet him,” Harry said. “We search for MIAs who died at such a young age. We wonder about them and what their lives could have been. Perry was amazing; In addition to being fun, interesting, and inspiring, He also gave me context. I feel like I’ve made a connection with the people we’re searching for.”