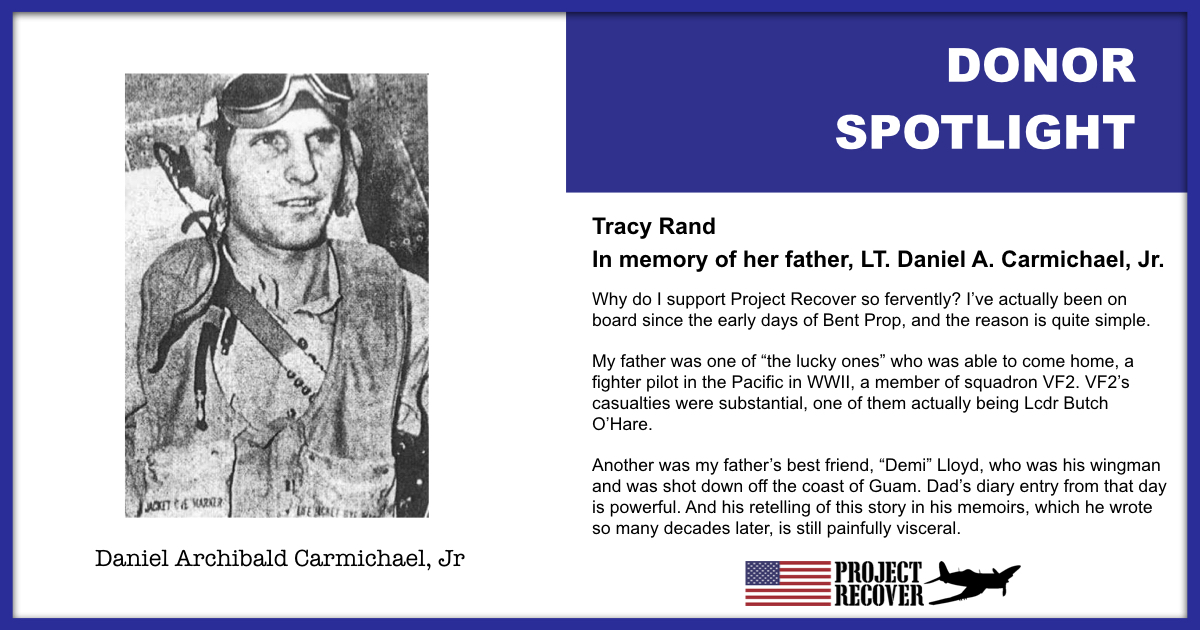 I support Project Recover so fervently because my father was one of “the lucky ones” who was able to come home, a fighter pilot in the Pacific in WWII, a member of squadron VF2. VF2’s casualties were substantial, one of them actually being Lcdr Butch O’Hare. Another was my father’s best friend, “Demi” Lloyd, who was his wingman and was shot down off the coast of Guam. Dad’s diary entry from that day is powerful. And his retelling of this story in his memoirs, which he wrote so many decades later, is still painfully visceral.

After Dad died in 2014, I reread his journal, which has since been transcribed and cross-referenced and, along with his other memoirs, resides in The National WWII Museum in New Orleans. And it made me consider all the others who did not come home. And when I saw a story about BentProp (now Project Recover) on 60 Minutes, it was a seminal “AHA Moment”.

About Daniel A. Carmichael, Jr.

Daniel A. Carmichael survived the war in the Pacific as a highly decorated ace. But so many others did not, all over the world, in other wars as well. He went on to have an incredible life, including being awarded The Lone Sailor Award. He was blessed with a family, and a life filled with what he loved to do: test piloting, golf, and racing cars. (He was an architect of hospitals and schools on the side!) The MIAs remain in a sort of limbo, as do their families. Project Recover ends that limbo, brings closure, and allows the families to actually finally grieve.

We should all be deeply grateful for what Project Recover does.

Honor Your Loved One

To honor your loved ones on Project Recover’s on Donor Spotlight series, make a donation of any size today.