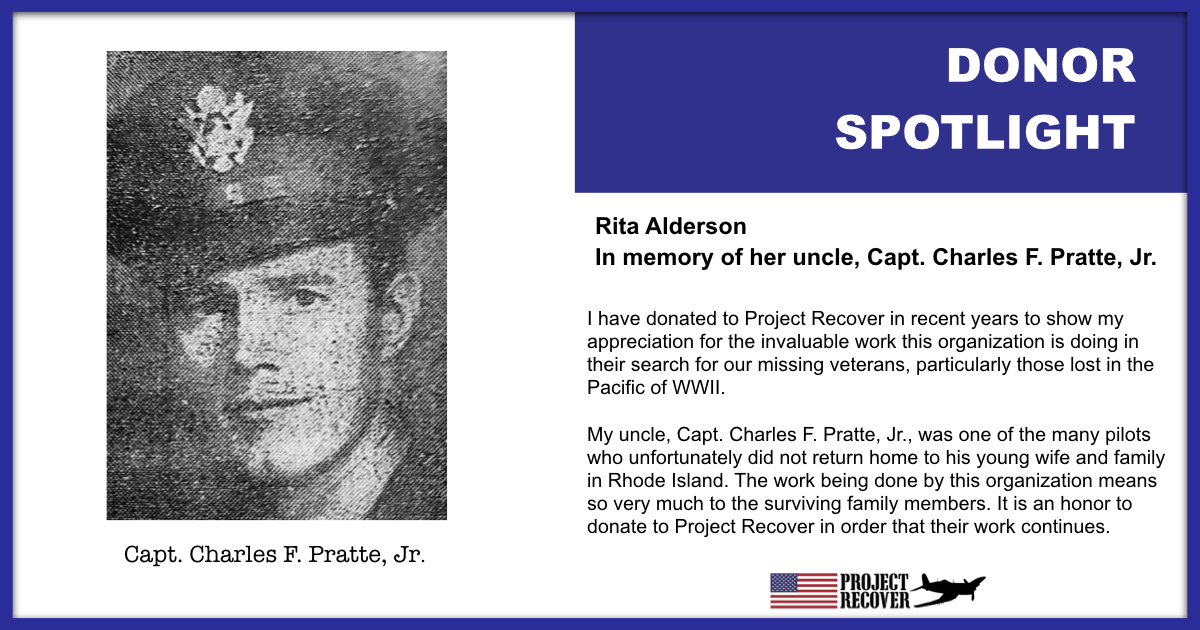 I have donated to Project Recover in recent years to show my appreciation for the invaluable work this organization is doing in their search for our missing veterans, particularly those lost in the Pacific of WWII.  My uncle, Capt. Charles F. Pratte, Jr., was one of the many pilots who unfortunately did not return home to his young wife and family in Rhode Island. The work being done by this organization means so very much to the surviving family members.  It is an honor to donate to Project Recover in order that their work continues.

Captain Charles F. Pratte, Jr., was a pilot in World War II. He is well-known for having made a historic landing of a B-24 1943. The aircraft, nicknamed The Belle of Texas, had its hydraulic braking system shot out. Pratte instructed the crew to tie three parachutes to the gun mounts to slow the aircraft down for landing.

Captain Charles F. Pratte Jr. was a pilot of the 7th Army Air Forces, 11th Bomb Group (Heavy), 42nd Squadron in the Pacific during WWII. He and his crew flew together for most of the time and was a highly respected pilot and crew. They were flying a B 24 J, #42-109871.

After nearly 40 missions, Captain Charles F. Pratte, Jr., and his crew were assigned to a mission at Chichi Jima. On the morning of January 22, 1945, Capt. Pratte and his crew took off for Saipan, their first mission of the day. Pratte was piloting the Song of Bernadette, a B-24 named after his wife. Upon their return, they loaded their aircraft with two 2,000 bombs. This time they set off on a mining mission in Chichi Jima. They never returned from the mission. Pratte’s squadron searched for two days. They did not find any sight of the crew or their aircraft.

“It was with great regret and sorrow that the squadron lost one of its oldest and best crews on the 22nd of January….”   (Organizational Squadron History of the  42nd for the month of January 1945, in reference to the loss)

The crew members lost with him that day were:

“Lt. Pratte was one of the oldest and most experienced pilots in the squadron.  It was he, who in December of 1943, after his hydraulic system had been shot away in a raid over Maloelap, successfully landed his airplane on a fighter strip at Tarawa with three parachutes trailing behind to slow his speed. This was the first time such a landing had ever been made and Lt. Pratte received a personal letter from General Arnold congratulating him on his resourcefulness and skill….”

(Organizational Squadron History of the  42nd for the month of January 1945, in reference to the loss)

Rita D. (Pratte) Alderson made a donation in memory of her uncle, Capt. Charles F. Pratte, Jr.. Her father, Herbert A. Pratte, was Charles’ brother.  He was in the Army in Europe, while her uncle was in the Army Air Force in the Pacific.

We believe bringing our MIAs home is a mission for every American.