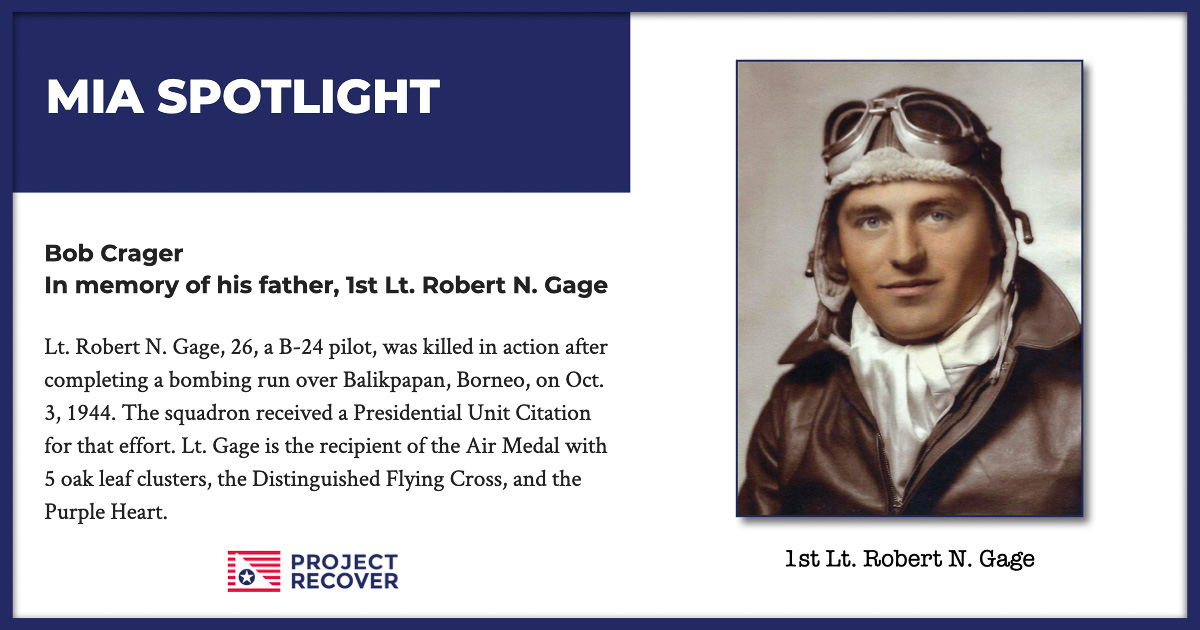 “I donated to Project Recover because of the outstanding job they are doing to recover the remains of loved ones and to give answers to the family.

My father, 1st Lt. Robert N. Gage was killed in action on October 3rd, 1944, after completing a bombing run on the oil refineries in  Balikpapan in  Borneo. He was awarded the Distinguished Flying Cross, Air Medal with 5 Oak Leaf Clusters, and the Purple Heart. The unit received the Presidential Unit Citation for extraordinary heroism in action against an armed enemy.” (~Bob Crager, son of 1st Lt. Robert N. Gage)

On the 3rd of October, 1944, Lt. Gage and his crew took off from Kurnasoren Airfield on a bombing mission on the Balikpapan oil refineries on the island of Borneo. Lt. Gage was 26 years old. He and the crew were embarking on a mission that was the most audacious of its kind.

Forty B-24’s from the 307th and Thirteenth Air Force’s 5th Bomb Group were to fly unescorted to a destination that was 17 ½ hours away, for a total round trip distance of 2,610 miles.

“It is doubtful that a more dangerous, grueling, and heart-breaking mission has ever been performed in any theater of war.” (1st Lt. John H. Bennett)

The mission was successful, but the cost was high. The 307th lost seven B-24’s and 63 men. 1st Lt. Robert N. Gage and his crew were among the casualties.

The B-24s dropped 50 tons of bombs on their targets. They damaged the Pandarsari refinery which was known as the ‘Ploesti of the Pacific,’ as well as sulphuric acid plants, oil storage tanks, and Edeleanu plant.

“Immediately after leaving the target, Lt. Gage’s airplane (933, 370th Bg.) pulled up in front of the formation from below was apparently in serious trouble, as it was flying erratically. Our formation got above it and gave it all the protection possible. The plane gradually began to veer to the right of course and slowly lost, altitude, and from the way it was flying, pilots believed that someone other than a pilot was at the controls. Guns were still firing as Zekes were seen to break away when fired upon.

As our lead plane had one engine out and Lt. Gage was still getting further off course, it was necessary to leave him and head for Morotai. Lt. Gage was last seen at …at about 5,000 feet and heading in an East-south-easterly direction. He was flying through clouds at the time. Two or three enemy aircraft were in the vicinity. Time of the last sighting: 0945 (approx).

It is doubtful that a more dangerous, grueling, and heart-breaking mission has ever been performed in any theater of war. This report can by no means adequately reflect the feats of the individual heroism and bravery displayed, which are too numerous to mention. No honor would be too great to bestow on every participant. (1st Lt. John H. Bennett)

After completion of the bombing mission, #44-40933 was attacked by Japanese aircraft and shot down and were believed to have crashed at sea. (1st Lt. John H. Bennett)

1st Lt. Robert N. Gage and his crew were immediately declared Missing in Action. On March 15th, 1946, they were declared Killed in Action.

Three months earlier, Gage’s wife, Geraldine, had given birth to the couple’s son. When he wrote into Project Recover, Bob noted, “My Dad knew I had been born (July 1, 1944), but we never met. (Yet)”

On January 12th, 2020, Vicky Yocum Jones called her brother, Bill Yocum. She had come across an old US Army footlocker in her attic. She remembered purchasing it some 25 years prior at a garage sale for $5. Her brother had some experience in finding family members for genealogy purposes. Vicky wanted help finding the family of the name painted across the top: Robert N. Gage.

Vicky and Bill did some research. One thing led to another and before long, they made contact with Lt. Robert N. Gage’s son.

On January 20th, Bill and Vicky met Robert ‘Bob’ Gage Crager and his wife in Waco, Texas. They gave him his father’s footlocker. Though he never met his father, Bob has collected all of his medals and is filled with fascinating stories about his dad’s missions during World War II.

You can read more about Lt. Robert  N. Gage in Every Town USA by Michael McCoy as well as in The Long Rangers, a diary of the 307th Bombardment Group (H) by Sam Britt, Jr. – although Bob notes his father’s middle initial is incorrect.’

It is a privilege for us to showcase people who have served in World War II. This MIA Spotlight is made possible by a generous donation from Bob Crager in memory of his father, 1st Lt. Robert N. Gage. Spotlighting your loved one is our way of saying thank you.