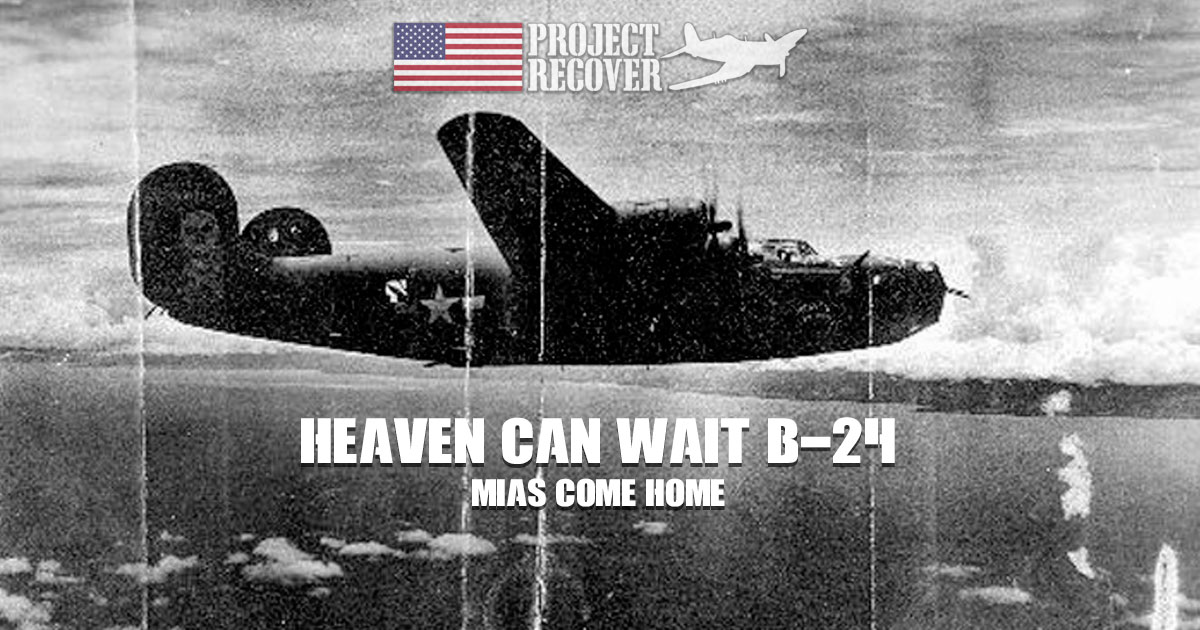 May 22, 2018 – A B-24 D-1 bomber, Heaven Can Wait, associated with 11 American servicemen missing in action from World War II was recently found and documented in Hansa Bay off Papua, New Guinea by Project Recover—a collaborative team of marine scientists, archaeologists, and volunteers who have combined efforts to locate aircraft associated with MIAs from WWII.

The crew of “Heaven Can Wait” was part of the 320th squadron of the “Jolly Rogers” 90th Bombardment Group and was on a mission to bomb Japanese anti-aircraft batteries around Hansa Bay on March 11, 1944, when their B-24 was shot down by enemy fire causing it to crash into the ocean. The crew had arrived in Papua New Guinea just four months prior to join the Pacific theater of combat against the Japanese during WWII.

Present-day Papua New Guinea was the site of military action in the Pacific from January 1942 to the end of the war in August 1945, with significant losses of aircraft and servicemen.

Project Recover set its sights on finding “Heaven Can Wait” after being presented with four years of research on circumstances of the crash, compiled by family members of one the B-24 crew members seeking closure for their lost relative. These data included historical eyewitness narratives from official military reports, mission documents, and diary entries from crew members on other aircraft information with the B-24 during its flight.

In October 2017, a team from Project Recover set out to perform an archaeological survey of Hansa Bay believed to be the final resting place of 5 U.S. Aircraft with 24 MIA lost during fierce combat during WWII. Based on the historical data, “Heaven Can Wait” was believed to be offshore the north end of the Bay.

After 11 days on the water, and a search that covered nearly 27 square kilometers of the seafloor involving scanning sonars, high definition imagers, advanced diving, and unmanned aerial and underwater robotic technologies, Project Recover located the debris field of the B-24 bomber, Heaven Can Wait, in 213 feet of water. The details of the crash site have been formally communicated to the U.S. government for their review to potentially set into motion a process for recovering and identifying the remains of up to 11 crew members missing for over 70 years.

Project Recover: The Finding of ‘Heaven Can Wait’ B-24 from Kyle McBurnie on Vimeo.

“Unique to this mission was the contact by an extended family group associated with ‘Heaven Can Wait’ while our historians were independently researching the loss of their loved one prior to our departure to Papua New Guinea,” said Eric Terrill, co-founder of Project Recover, expedition leader at Hansa Bay, and an oceanographer from Scripps Institution of Oceanography at the University of California San Diego. “The results from our efforts in Hansa Bay have stirred a mix of lasting emotions within our team and drives home the need to recognize the sacrifices that service members and their families make in protecting our freedoms.”

“This is an important step toward our ultimate goal of identifying and returning home the crew of ‘Heaven Can Wait’ who bravely served our country during the battle at Hansa Bay,” said Dan Friedkin, team member of Project Recover and chairman and CEO of The Friedkin Group. “Our search efforts for the more than 72,000 missing American service members from World War II will continue as we seek to bring closure to the families impacted by their loss.”

Project Recover’s cutting-edge team of scientists, historians, archaeologists, engineers, and divers conduct research and surveys to discover new crash sites, fully document wreckage and correlate wrecks to known MIA cases. That documentation can then be used by the U.S. Department of Defense’s Defense POW/MIA Accounting Agency (DPAA) to evaluate that site for the possible recovery of remains. DPAA is tasked with recovery and repatriation efforts, including notification of the families of these MIAs.

The mission to Papua New Guinea occurred during Project Recover’s second year of formal operations and was made possible by a substantial financial commitment from Friedkin in 2016. Friedkin’s continued support is helping sustain ongoing missions, while enabling the organization to innovate its technology and broaden its search and discovery efforts to focus areas around the world.

In the last five months there have been three repatriation ceremonies for American WWII service members who were recovered and identified as a result of Project Recover’s search and discovery efforts: Albert (“Bud”) Rybarczyk, Navy Reserve Aviation Radioman 2/c and Ora H. Sharninghouse Jr., Navy Reserve Aviation Ordnanceman 2/c of the U.S. Navy, USS Intrepid, Air Group 18 whose TBM Avenger went down in the Republic of Palau, and Navy Reserve Lt. William Q. Punnell whose F6F Hellcat was shot down in the Republic of Palau.

To this day, there are still more than 72,000 U.S. service members unaccounted for from World War II, leaving families with unanswered questions about their loved ones. Project Recover intends on launching more underwater missions later this year in various locations within the Pacific and European Theaters.

About Project RECOVER
Project Recover is a public-private partnership to enlist 21st-century science and technology combined with in-depth archival and historical research in a quest to find the final underwater resting places of Americans missing in action since World War II.
Established in 2012 with initial support from the Office of Naval Research and formalized in 2016 with private funding, Project Recover is a partnership among researchers at the University of Delaware’s College of Earth, Ocean, and Environment, Scripps Institution of Oceanography at the University of California San Diego, and The BentProp Project, Limited.

Read more posts about B-24 Bomber, Heaven Can Wait: