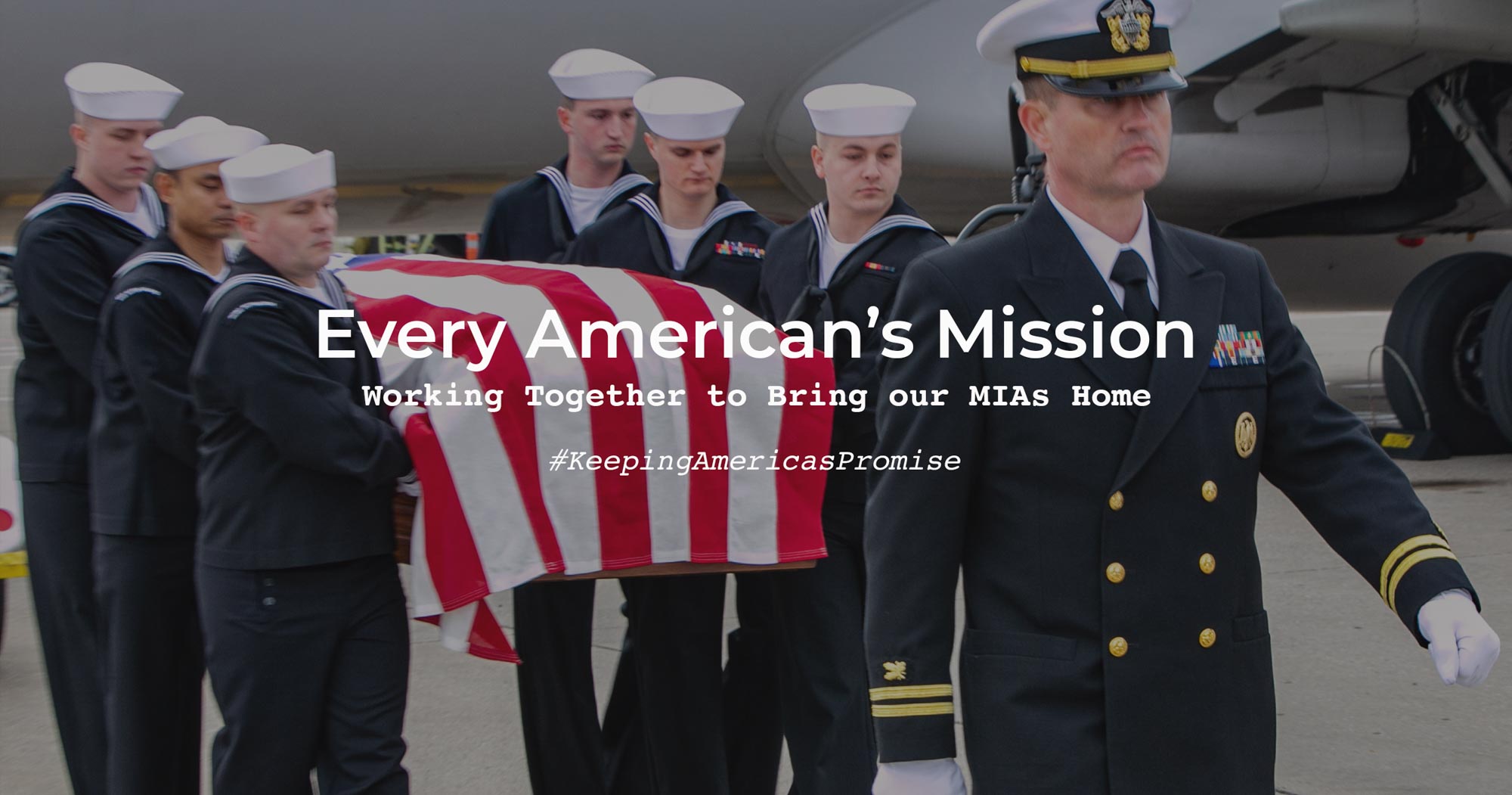 From One Man’s Vision to Every American’s Mission

Project Recover’s vision to bring MIAs home is a mission for every American. We are proud and privileged to have so many people joining us who are as passionate about keeping America’s promise as we are. Together we are helping to bring our MIAs home. It didn’t start that way, however. It started with one B-24 wing lying partially submerged in a mangrove swamp and one man’s vision to do the right thing.

When Pat Scannon, Project Recover founder, saw the wing lying in shallow water next to one of these islands, he recognized it immediately. He’d spent hours building model airplanes as a boy. It was a B-24.

“At that moment, I forgot about the aluminum and iron of that wing and what replaced it was an overwhelming feeling that something terrible had happened at this site.”

He bombarded his boat driver with questions. The driver gave the same answer to each. Except for knowing where it lay along the shoreline of this small coral island, he knew nothing more about the wing.

In the few steps it took to jump from the boat to the wing, Pat decided that the fate of that B24 and its aircrew would not go unanswered.

In the split second, he was unaware of how that decision would change the trajectory of his life. He had no idea how many other lives his decision would profoundly touch, inspire, and change forever in the years to come.

There are three telltale signs of a visionary idea.

MIA families — and even the greater American populous without an MIA — experience something similar when they reconnect with World War II MIAs decades after the war.

Humanity invariably carries weight from the stark devastation of wars and conflicts. It is a weight most of us don’t know we carry or have any clue how to relieve ourselves and society of its weight.

This idea took off slowly. It was not a mission for every American in the early years. A civilian and non-government employee finding answers to questions about World War II MIAs did not generate a lot of enthusiasm. Pat spent years slogging through jungles, diving in search of crash sites, scouring the archives, and making personal connections. Teammates came and went. Finding people who shared his vision, passion, and work ethic was an evolving process.

Finally, Pat began to find his lasting teammates in the skydiving community. Living counter-culture lives, some adventure enthusiasts could see Pat’s vision. Like Pat, they had a  passion that took them outside the norm. Those who joined had visions themselves. They understood the camaraderie, exhilaration, as well as the diligence and precision needed to live life on the razor’s edge and were at home there.

It was not every American’s mission, but that was never the point. The point was to find answers, to help bring MIAs home, and now Pat had a dedicated team.

The BentProp Project went through a radical transformation in 2014. After more than 30 years of searching for MIAs as a solo entity, they formed a partnership with SCRIPPS Institution of Oceanography at the University of California, San Diego, and the School of Marine Science and Policy at the University of Delaware. The BentProp Project changed its name to Project Recover.

The partnership gave Project Recover access to technology that changed their search capacity almost overnight. They went from searching a few thousand square feet each day with scuba divers to four square kilometers a day with AUVs and ROVs.

“That’s like going from riding a horse to flying a jet in terms of the extent of area we can cover.”

From the end of 2017 through 2018, In the space of 15 months, the Project Recover team attended the funerals of four former World War II MIAs. Plus they located Heaven Can Wait, a B-24 with 11 associated MIAs as well as the USS Abner Read, a WWII destroyer sunk off Kiska Island, Alaska, with 71 MIAs.

The finds generated a lot of publicity.

But it was the long-overdue return of our MIAs and their legacy of service and sacrifice that spoke to the hearts of Americans. Nothing prepared the team for the experience attending the funerals of repatriated MIAs. People came out in droves to honor our MIAs. Men, women, and children stood in rain, choked back tears, and waved flags to celebrate the World War II hero’s return.

In a time of national division, our MIAs returned home as a unifying force. Without words, they spoke of peace and humility, kinship and gratitude. Americans responded.

A Mission for Every American

Sixteen million Americans served in the armed forces during World War II; 12% or one out of every eight people. Four hundred thousand American’s were killed; nearly 20% of whom were MIA by the war’s end. There were a million and a quarter more who served at home in the aircraft and munition factories, too.

The Project Recover team witnesses this in multiple ways. Three stand out. First, we experience family bonding and community jubilation when an MIA returns home. Second, we see the ever-growing wave of media eager to broadcast good news. Third, we witness kids of all ages participating and taking in the importance of bringing our MIAs home. (See our video below from our recent educational initiative where high school students speak about the importance of bringing our MIAs home.)

Perhaps most indicative is a surge of interest in Project Recover itself. Our January subscriber rate lept more than 500% from that of October 2019. Donations in 2019 increased by 243% from those in 2018.

Our supporters are giving us a powerful message: our mission to bring MIAs home is every American’s mission.

We’ve responded in kind. We consider every fan, every subscriber, and every donor as a member of our mission to bring MIAs home.

We value every member of our growing family. Many of our donors have given in memory of someone. To honor them, we created the Donor Spotlight Series. This offers our donors who have given to Project Recover in memory of an MIA or service member a chance to spotlight that person on our website or social media.

After only two months, so many donors have responded to our Donor Spotlight invitation, we are overwhelmed. We have to revamp our system to meet the need for people who want to honor our World War II heroes.

Like you, we are committed. Each photo, each story is so precious to their families and our collective legacy of who we are as Americans. It is our privilege to honor them.

In the 27 years from 1993-2020, Project Recover (and The BentProp Project before) has conducted 60 missions in 20 countries and territories. The team has located 30+ US aircraft associated with 100+ MIAs. Through a joint effort with DPAA (and its predecessors), Project Recover has helped repatriated 14 US service members.

Thank you for your support of Project Recover and letting us know that bringing our MIAs home is your mission, too. We hope it is every American’s mission.