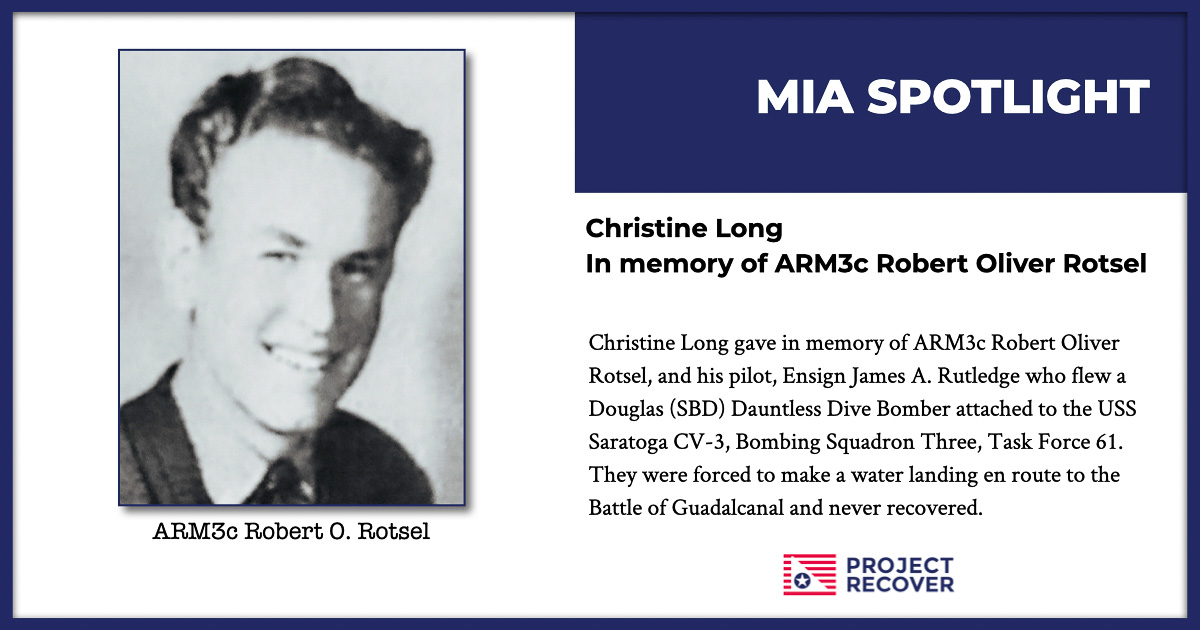 ARM3c Robert O. Rotsel, and his pilot, Ensign James A. Rutledge flew a Douglas (SBD) Dauntless Dive Bomber attached to the USS Saratoga CV-3, Bombing Squadron Three, Task Force 61. They were forced to make a water landing en route to the Battle of Guadalcanal and were never recovered.

ARM3c Robert Rotsel is the first cousin once removed to Christine Long. Christine donated to Project Recover in honor of ARM3c Rotsel and his pilot, Ensign James A. Rutledge.

“I gave to Project Recover because I truly admire and want to support your efforts to recover those Americans missing in action, especially in World War II. “

ARM3c Robert Rotsel and Ensign James Rutledge were the crew of SBD Dauntless Dive Bomber aboard the USS Saratoga. The two service members were a part of the first major land offensive against the Empire of Japan: Guadalcanal in the southern Solomon Islands. In August 1942, they were moving toward Guadalcanal.

The code name for the Allied offensive was Operation Watchtower. In July, the fleet of 75 warships gathered near Fiji. They conducted one rehearsal landing. Then, on July 31st, 1942, they began traveling southeasterly across the Pacific toward their destination. The battle was scheduled to commence on August 7th.

The fleet was due to travel more than 1,300 miles across the Pacific Ocean over the course of roughly a week to reach their destination. Air combat patrols were launched on a regular basis to survey and secure their traveling perimeter.

On the afternoon of August 4th, 1942, ENS James Rutledge and ARM3c Robert Rotsel took off on a routine combat air patrol mission. They did not return.

At 5:50 pm, the USS Saratoga received word that the crew had been forced to make a water landing. The crew was spotted, alive, in a rubber boat.

Immediately, an order was given to the USS MacDonough, an escort destroyer, to search for the missing men.

0600 1800 McDonough directed to proceed to rescue of pilots. Failed to find. Searched until one hour after dark. (USS Saratoga War Logs)

On August 5th, they searched some more.

Four and a half hours later. USS Saratoga records indicate the planes landed, without success.

Christine Long conducted extensive research to learn what happened to her cousin on his final mission. However, like many other MIA families, she encountered the challenges of finding data about events and people during wartime.

The USS Wasp itself was sunk on September 15th, 1942. Their records end in July 1942. (The R/V Petrel, owned by the estate of Microsoft co-founder located the USS Wasp in 2019.) An archival search through the USS MacDonough did not reveal any mention of the search.

The letters contained in the Casualty Files remain poignant for any person and, perhaps especially, any parent to read. They remind us there was a time in our not-so-distant past when letters such as these were the norm. More than 400,000 US service members died and another approximately 20% were Missing in Action.

The letters reveal a father’s pride in his son’s service and a struggle to accept he will never see him alive again.

Upon receiving the news of his son’s missing status, Mr. Rotsel wrote:

“We are in receipt of information that on August 4, 1942, radioman Robert Oliver Rotsel together with his pilot, Rutgers of the V.B.3 Saratoga Air Group was forced down at sea. Any information that you could furnish me, his father regarding this incident will be greatly appreciated.”

One year later, upon learning that his son’s status had been shifted from missing to presumed dead, Mr. Rotsel wrote the following in two separate letters.

“I appreciate your expression of sympathy and sorrow for our loss but in view of information which I previously received am still holding out hope for Robert’s return.”

Beneath his full signature are the poignant typewritten words: “Robert’s father.”

It is our privilege to spotlight and to showcase people who have served in World War II. This MIA Spotlight is made possible by a generous donation from Christine Long who gave in memory of her first cousin once removed, ARM3c Robert O. Rotsel as well as ENS James A. Rutledge. Christine’s father, James L. Long, is a member of the OSS Maritime Unit/UDT 10 which lost three service members on Yap Island during WWII.