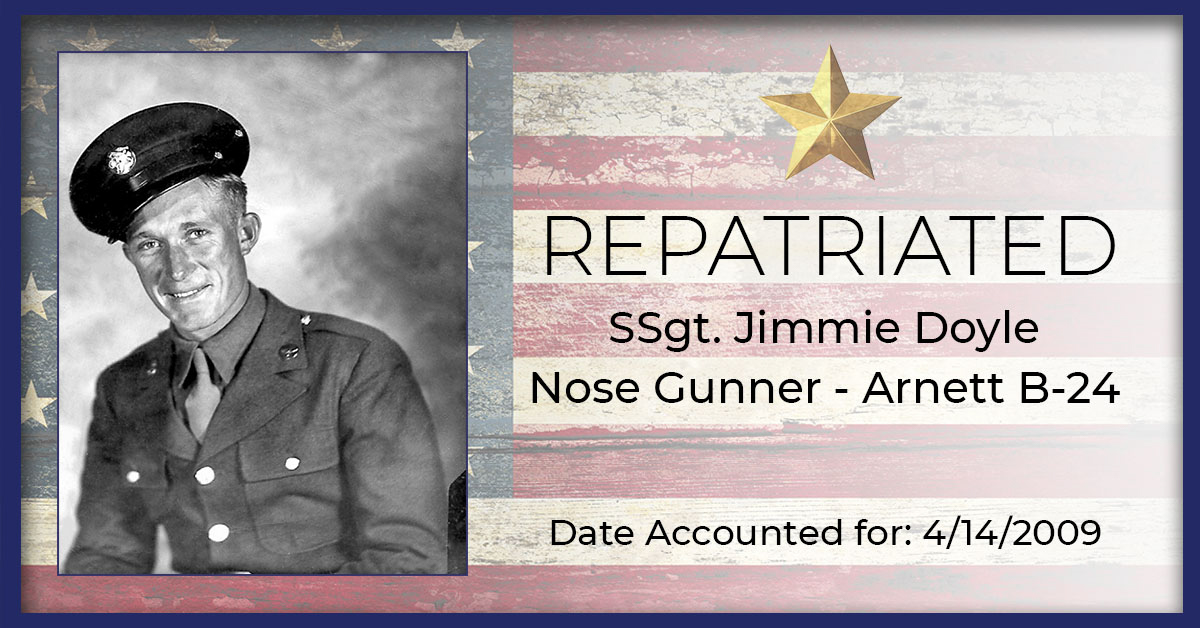 SSgt. Jimmie Doyle was accounted for by the Defense POW/MIA Accounting Agency. Project Recover located his downed B-24 in January 2004 and is honored to play a vital role in his repatriation.

Project Recover humbly acknowledges SSgt. Doyle’s service and sacrifice, as well as the enduring loss to his family. We are grateful and honored to play a vital role in bringing him home. The repatriation of SSgt. Doyle helps resolve generational grief and awaken us to gratitude, hope, love, and unity. This is the legacy of our MIAs and their final mission.

SSgt. Jimmie Doyle was listed as a tail gunner on the mission. However, not long before the final mission, Jimmie had shot down an enemy aircraft and was asked to serve as the nose gunner for the crew.

At the time of his final mission, SSgt. Jimmie Doyle was married to Myrle. They had a son, Tommy, who was almost two years old. Jimmie had hoped to go home on leave soon to see them.

Project Recover located the aircraft on January 26, 2004, after a 10-year search. The Defense POW/MIA Accounting Agency (DPAA) repatriated eight MIAs in 2008. SSgt. Doyle was among them. The remains of SSgt. Doyle were escorted back to his hometown by his grandson,

The eight repatriated crew members were buried together at Arlington National Cemetery. SSgt. Doyle is also buried beside his beloved wife, Myrle, in LaMesa, TX.  SSgt. Doyle’s grandson, Lt. Col. Casey Doyle, was invited to become a member of Project Recover in 2009 following the funeral.

Three crew members were not recovered from the B-24. They parachuted from the aircraft were then captured, and executed by enemy forces. They remain MIA.

The plane is featured in a painting by Mark Pestana, entitled Mission: Palau. The story of the search and recovery was featured in the book, Vanished: The Sixty-Year Search for the Missing Men of World War II by Wil S. Hylton.