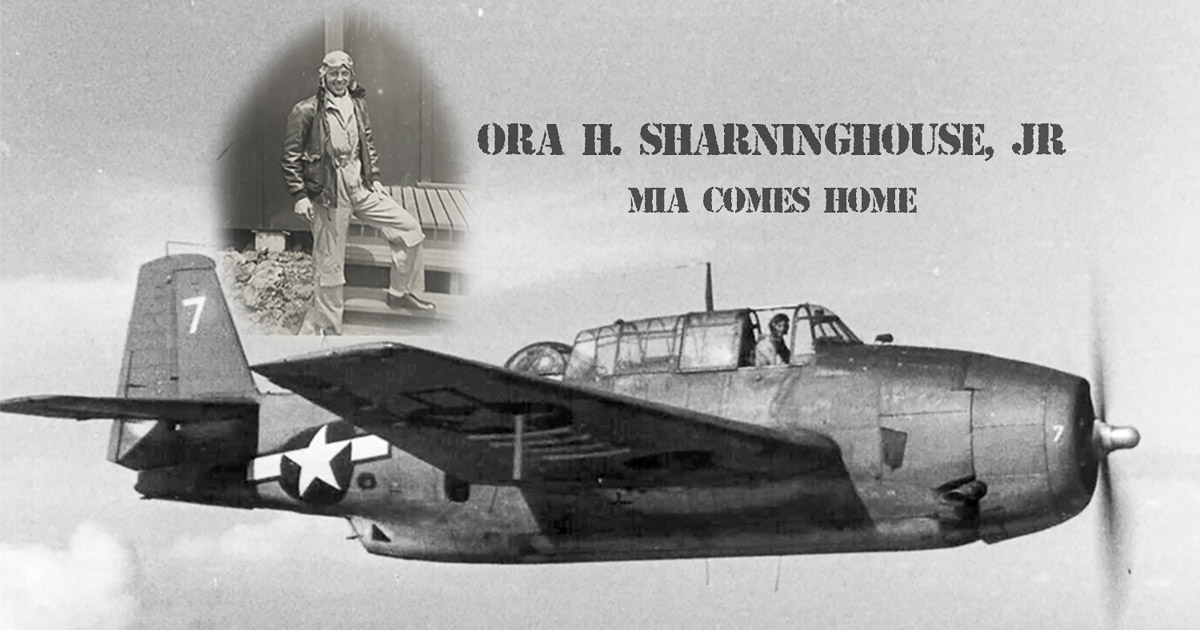 MIA For 73 Years, Sharninghouse Will Be Buried With Military Honors

Missing In Action for 73 years, Navy Reserve Aviation Ordnanceman 2nd Class Ora H. Sharninghouse, Jr, 22, will be buried with military honors on April 7th, 2018. He is one of three MIAs associated with a TBM-1c Avenger found by Project Recover and BentProp in the waters off Palau.  His burial represents closure at last for his family.  It is an honor for Project Recover and BentProp to bring recognition to a serviceman who gave his life in service and closure to his family.

Sharninghouse was a member of the Navy Torpedo Squadron Eighteen (VT-18), based on the USS Intrepid during World War II.  On Sept. 8, 1944, Sharninghouse,  his crewmate Navy Reserve Aviation Radioman 2nd Class Albert P. Rybarczyk, and their aviator, Lt. John J. Savage (still MIA) took off in their TBM-1c Avenger on a mission to soften enemy positions on Babelthuap Island in Palau.  Their aircraft dropped their load on an ammunition dump as assigned. Their plane was catastrophically damaged when flak from the explosion tore the wing off the aircraft, and they crashed off-shore. Sharninghouse was listed as MIA.

The wing of the Avenger was located in 2005 with the help of Palauan locals. A local chief who was 28 years old at the end of WWII advised BentProp to contact to local hunters to lead the way to the wing. “The guides took us down the crest and entered the mangrove (reportedly another area favored by saltwater crocodiles).” (Excerpt from P-MAN VII Final Report)  BentProp found the outer one-half of a starboard wing . . . “with blue paint visible on the dorsal surface and white paint on the ventral surface with a star-and-bar.” (Excerpt from P-MAN VII Final Report)

Pat Scannon, MD, Ph.D.,  founder of BentProp said about seeing the Avenger wing for the first time, “It changed my life.” See the video below for the full history.

Determined to learn the rest of the story, and give recognition to the servicemen lost with it, Scannon committed to finding the rest of the aircraft. At that time, BentProp was operating independently and finding a submerged aircraft after 70 years was time and labor intensive. It was another 9 years before Scannon and his BentProp team would find the rest of the Avenger. When he did, it was as a founding member of a newly formalizing partnership with Project Recover.

In 2015, BentProp began a formal partnership with Scripps Institution of Oceanography at the University of California in San Diego and the University of Delaware’s College of Earth, Ocean, and Environment. Project Recover, as the partnership is called, optimizes underwater search areas with scanning sonars, high definition and thermal cameras, advanced diving, and unmanned aerial and underwater robotic technologies to locate and bring home MIAs.

On March 25, 2014, BentProp in partnership with Project Recover located the TBM-1c Avenger. “The debris field is dispersed a little bit with a flap over there, landing gear thataway and the fuselage in the middle. And the airplane is missing the right wing, which is what we saw in the mangroves 9 years ago.” ((Excerpt from P-MAN XVI Update # 12)

The Avenger was in 100 feet of water. The wreckage was spread across 40 meters in two locations suggesting the plane was tumbling when it crashed.  An unofficial flag ceremony was held over the crash site in honor of the three affiliated MIAs. All details of the crash site and its location were then turned over to the Defense POW / MIA Accounting Agency for official identification, recovery, and repatriation of servicemen, like Sharninghouse to be buried with military honors.

BentProp, along with the entire Project Recover team, is grateful for the privilege of helping to bring closure to the Sharninghouse family and bring AOM2c Sharninghouse home to be buried with military honors at last.

Read posts related to Sharninghouse and this TBM Avenger crew: