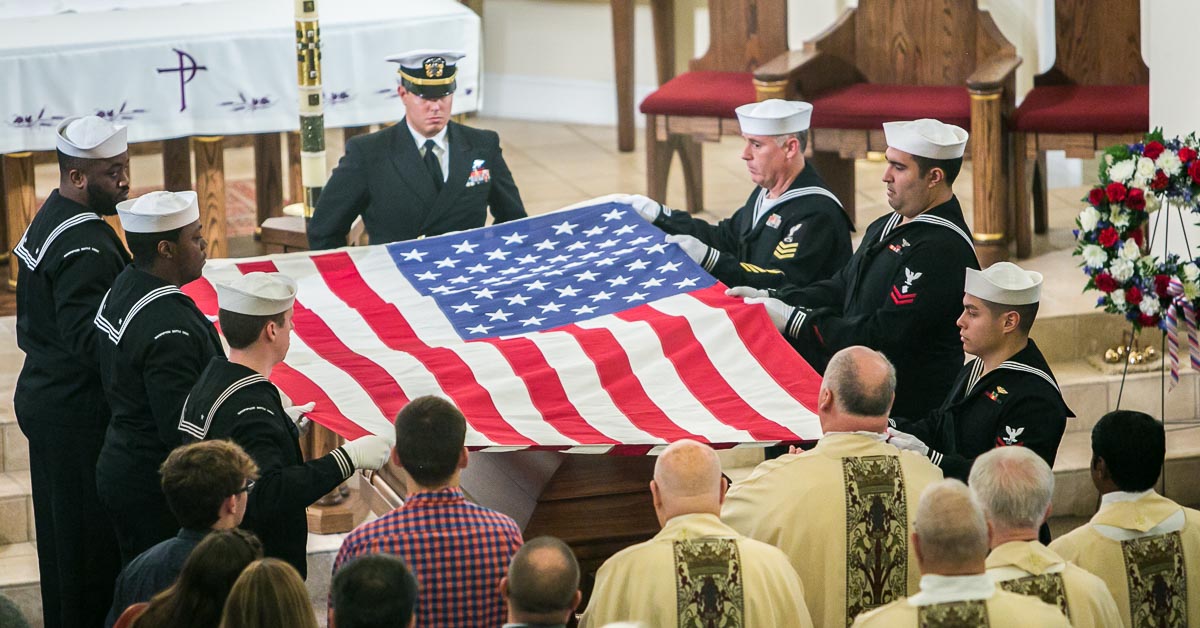 On December 10 and 11, a ceremony and funeral were held near Stevensville, a small community in southwest Michigan, for ARM2c Albert “Bud” Rybarczyk, USNR. Seven members of Project Recover, made up of teams from The BentProp Project, Scripps Institution of Oceanography (SIO) and the University of Delaware (UDel), traveled from across the United States to Bud Rybarczyk’s hometown along the shores of Lake Michigan at the invitation of his family to honor the repatriation of Albert P. “Bud” Rybarczyk and homecoming of this American who had been Missing in Action since September 8, 1944. The return home of their Uncle Bud turned out to be not just a family affair – the team witnessed the community of this small town in southwestern Michigan comes together to honor Bud’s return.

Incredibly, his sister Mary Ann, a retired Catholic nun, is still alive which made the event all the more special. The family members said that, while it came as a surprise to hear from the Defense POW/MIA Accounting Agency (DPAA, formerly JPAC) about his recovery, Sister Mary Ann over the years never gave up hope for his return. In fact, the family bought a burial plot for him long ago. They have now taken joy that “Bud has come home for Christmas”.

What does this have to do with Palau?

Everything – because 73 years ago, Bud Rybarczyk was part of a US Navy three-man aircrew whose TBM-1c Avenger from the aircraft carrier, USS Intrepid,  crashed after dropping a bomb on the power plant along western Aimeliik on that September day in 1944. Their mission was part of the preparation for the landing of the US Marines on Peleliu the following September 15th. Two airmen, Aviation Radioman Second Class Albert “Bud” Rybarczyk and Aviation Ordnanceman Second Class Ora Sharninghouse died on that Avenger when it crashed into the ocean north of the power plant. A now-deceased Palauan witnessed the third airman, the pilot, to parachute from the burning aircraft, swim to shore and be immediately executed by two Japanese soldiers.

BentProp working in partnership with SCRIPPS Institution of Oceanography and University of Delaware College of Earth, Ocean, and Environment located the underwater crash site on March 25, 2014. The search began in 2005, when BentProp team members, working with the Palauan Historical Preservation Office and the Office of the President, interviewed, with the help of team guide Joe Maldangesang, Chief Rengulbai Brikul and his son, J. Brikul in their Aimeliik village. The Chief, who has since passed away, recalled a “skokie” crashing into a mangrove and a parachute being seen. This was the first time the team learned of this crash. The BentProp team also interviewed Fuana Ngiratechekii in 2005 and again in 2017 and learned that the Palauan who witnessed the crash was her father. On that day, he had been gathering white clams in nearby mangroves for his family when he saw the aircraft crash into the ocean and the execution of the pilot. Her father’s story left a lasting impression on Fauna because she remembers it in detail – her father had told her his story many times and she said he must have done so for a reason. Starting in 2005 through 2013, BentProp teams made many underwater scuba searches in systematic patterns within this area’s murky waters for the wreckage, all without success. In 2012, JPAC contacted BentProp asking information about this Avenger and shared for the first time the official “Air Action Report ” (AAR), which provided useful and confirmatory data about the crash and its aircrew.

In 2013, SIO, UDel, and BentProp met for the first time at the Coral Reef Research Foundation in Malakal and realized the synergy of combining the advanced underwater robotics used by SIO and UDel with BentProp’s mission to locate American MIAs lost in combat. Project Recover, a partnership of all three organizations, was born from that meeting. The very first joint mission was to locate this lost Avenger. Using Fuana’s recollections and the AAR information, the Project Recover team calculated a projected flight path and from that an underwater search area. Using their Autonomous Underwater Vehicles, the SIO and UDEL teams found, on the very first search day, side-scanning sonar evidence of the crash site. Late in the day, Eric Terrill from SIO navigating the lead, Mark Moline from UDel, Pat Scannon from BentProp and divers from all three teams dove and located this Avenger, which became a known site after 71 years of waiting. Three days later, the same set of three teams located a second missing aircraft off the northern side of Arakebesan, an F6F-3  Hellcat fighter flown by Lt. William Punnell, USNR. Joe Maldangesang during his scuba dive was instrumental in locating the Hellcat. The Project Recover team documented both sites and turned all information over to DPAA. In 2015, DPAA sent underwater archaeologist Drew Pietruszka (now with SIO) to dive and survey these two sites. On June 30, 2017, DPAA announced the accounting of two airmen from the Aimeliik Avenger, AOM2c Albert Rybarczyk and ARM2c Ora Sharninghouse and the pilot of the Arakebesan Hellcat, Lt. William Punnell.

In Michigan where the Project Recover team met to honor repatriation of Albert P. “Bud” Rybarczk, his family was gracious to all the team members and the ceremonies were beautiful. The US Navy had two active duty officers present throughout the days from Bud Rybarczyk’s return by aircraft on Dec 7 to Grand Rapids, through the military escort to his home, to the Visitation at the funeral home on Dec 10 and the Mass and Funeral on Dec 11. The Mass ended with one of Bud’s cousins singing “I’ll Be Home for Christmas”. An active duty admiral attended the funeral and burial. In the face of cold blowing winds off Lake Michigan, the Navy Honor Guard truly honored Bud’s repatriation. Check out the local front page news article of the Repatriation of Albert P. “Bud” Rybarczyk

It is true that the 2014 Project Recover mission which located these two aircraft was amazing. However, the repatriation of Albert P. “Bud” Rybarczyk and return of their Uncle Bud to Michigan is evidence that the mission did not stop when the Project Recover team left Palau that year. AOM2 Ora H. Sharninghouse from the same Avenger crew will return to his home for his ceremony/burial on April 6 and 7, 2018 in Findlay, Ohio – the Project Recover team plans to be there for that repatriation. A large contingent of the Sharninghouse family attended the Rybarczyk Mass and Burial. The F6F-3 Hellcat aviator, Lt. William Punnell, also found in 2014 will be buried in the second half of April 2018 at Arlington National Cemetery, near Washington, DC, and Project Recover team members have also been invited by the family to attend.

All the members of the Project Recover team thank the Office of the President, the Historical Preservation Office and many Palauans who helped make the return of these American airmen home possible. The families of these repatriated airmen also wish to express their deep gratitude to the people of Palau for all their assistance.

A Very Merry Christmas to you and your family.

Read posts related to Rybarczyk and this TBM Avenger crew: