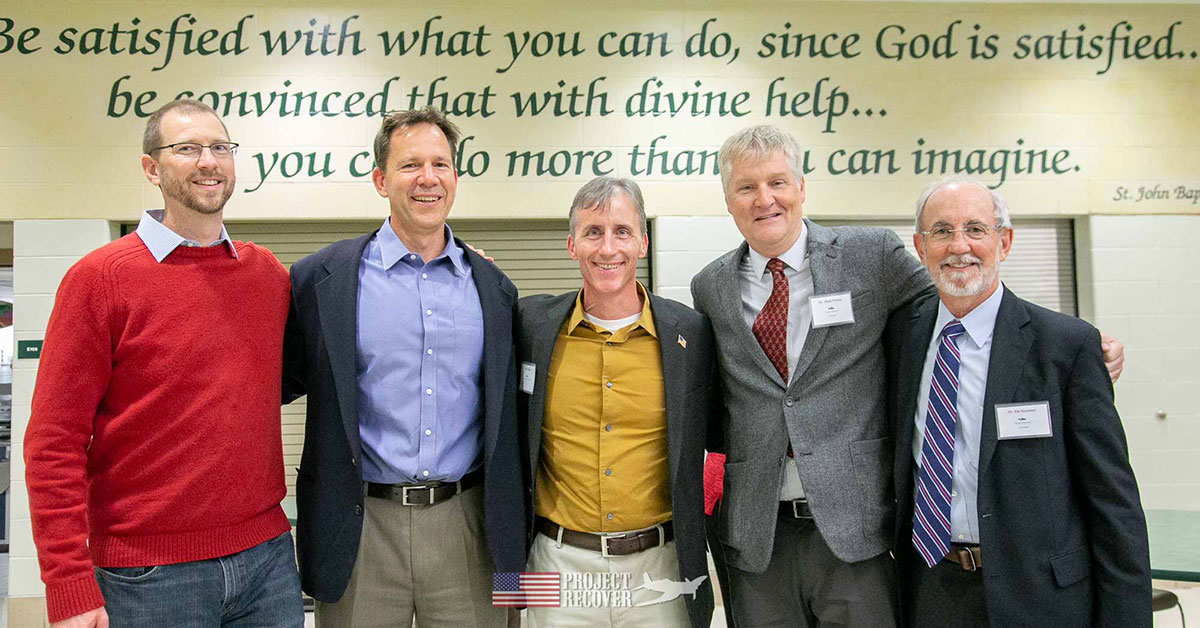 On March 11, 1944, a World War II B-24 bomber called Heaven Can Wait came under anti-aircraft fire and crashed in the waters off Papua, New Guinea, killing all 11 crew members onboard. Seventy-four years later, on October 13th, 2018, relatives of the crew members gathered for a “family reunion” in Victoria, Minnesota.

Scott Althaus, lead Kelly family researcher and first cousin once removed to the Bombardier, admitted that he used to use air quotes when describing the upcoming Heaven Can Wait “family reunion.” After all, the family reunion was not a family reunion in the conventional sense. Most of the 65 attendees were strangers until Memorial Day 2018 when Project Recover announced the B-24 Heaven Can Wait had been located.

Since then, Scott has changed his perspective.

“We are family because they (Heaven Can Wait crew) were definitely a family in ways we can only imagine. Not family by blood, but by a deep commitment to one another in a cause that was larger than all of them. They trained together every day for eight months and fought for four more. In his entry on the Kelly Family guest book from Thanksgiving Dinner 1943, under the space marked “hobby,” Don Sheppick ( 2nd Lt. Donald Sheppick, navigator) wrote five words: ”Taking care of the boys.”

“The boys” were his brothers of the Tennyson crew.”

The relatives of the (pilot, 1st Lt. Herbert) Tennyson crew gathered to celebrate that Project Recover had found the Heaven Can Wait, and they had found each other.

“We did it more out of a sense of joy than sadness. We were celebrating the joy of discovery and being in a bigger community of strangers who aren’t strangers anymore.”

Nine families from the Heaven Can Wait crew are in touch with each other. Relatives of four crew members (2nd Lt. Thomas Kelly, 2nd Lt. M.J. McFadden, S/Sgt. Walter Graves, and S/Sgt. John Emmer)  attended the reunion in person. Tom Schindler, son of S/Sgt. Eugene Darrigan (radio operator) and Cindy Chester Moran, daughter of 2nd Lt. Don Sheppick (navigator) had to cancel plans due to weather and health. They as well as Scott Jefferson, grandson of 1st Lt. Herbert Tennyson (pilot) followed the Heaven Can Wait family reunion online, through email, photos, and a book Project Recover had compiled as a gift for the families.

The families took turns sharing their experiences through the afternoon. The experience of finding a family’s MIA whose death is cloaked with unanswered questions and decades of silence carries a surprising emotional charge — even decades later, even when the serviceman was not met in person and known only through family lore.

Walt Graves, nephew to S/Sgt. Walter Graves his dad’s only brother, said he spent a lifetime wondering about the man who was his namesake. He was overcome with tears of sadness and joy when he learned his Uncle Walter’s plane had been found. He said he began his talk at the Heaven Can Wait Family Reunion with a quote that speaks to those emotions:  “A man is not dead until he is forgotten.”

The more family members she meets, the more Diane Christie, niece to her mother’s only brother, ‘Tommy’ Kelly, says she understands the reaction to finding a family’s MIA is ‘universal.’

“Our hearts are full of mixed emotions.  Joy, that after 74 years, these men who once were lost, have now been found.  Sorrow, that men who were so young died before they reached their full potential as sons, husbands, fathers, uncles, grandfathers, community members, and friends.  Mystery, uncertain about who they really were, and what they were really like.”

Jim Emmer shared what was true for all; that it was exciting to get to know his family’s MIA better. Through the conversation and the community, he got to know the families there and the family of the Heaven Can Wait crew, itself.

It is tragic when a family loses a beloved to war, and there is a funeral. Losing a beloved without closure, without a body or a burial, carries grief unto itself. Among MIA families, often the grief was so great, the parents and family simply could not, would not talk about it.

Walt Graves said his family did not talk about their loss, but his grandmother carried his Uncle Walter’s  (S/Sgt. Walter Graves) final pay in an envelope in her purse for the rest of her life.

Jim Emmer said he didn’t learn he’d lost an uncle in the war until 5th grade and then only because he saw his uncle’s gravestone in the cemetery.

There are rare exceptions to the silence. Cindy Moran Chester grew to know S/Sgt. Don Sheppick through many hours poring through letters, photos, stories and even poetry with her mother, Mary Rebar Sheppick Chester, Don’s widow.

The family silence after losing a son was a blanket covering an ocean of grief that many family members who were young at the time, or not even born, didn’t realize was a part of the fabric of their family. It was only through the discovery of their MIA’s final resting place, that the grief made its way to the surface. The grief at having lost and found someone they never personally knew came as a big surprise.

Families at the Heaven Can Wait reunion experienced joy and then awe at the miracle of finding the final resting place of their families’ MIAs. They have greater faith in miracles because they experienced one.

“So I thank You for bringing us together – not just to heal the pain of separation but to rediscover ourselves through a community of connection and relationships that we had lost over time.”

“As humans, we all have that need to connect…. As family expands, we lose our unity. We lost that until we had a reason to reconnect and stay in touch.”

“It opened a lot of doors to me that I didn’t know about myself. … There were times I when I am (closed) and fussy and think (I could) be more open to people. Well, I just met a bunch of strangers and was comfortable. This changed all that, I felt a greater sense of community than self.”

The sense of community and hope extended beyond individual families and the collective families of the crew. In his talk, Scott noted how exceptional their situation is. He encouraged families there to talk with each other. Through the conversation, more of the collective story will emerge. Time is passing quickly, and he stressed the importance of sharing and recording memories of their relatives’ lives. Finally, and most importantly, he urged families to cast a broader net and talk with other families about their MIA stories.

What stands out through it all is the awesome significance of each of these young men’s lives. There is no way they could have known the profound impact their lives would have, not only on the war, but on their extended family, community, and the nation nearly a century later.

“In a day that sees our country divided by so much that pulls us apart, we have the special privilege of being at the center of something that brings Americans together.”

“Maybe because they brought something out in us that we didn’t know was there. We all feel they are these great amazing people, but they are so approachable and they all want to be with us. When you think of it, they all have that daredevil side. They jump out of planes, dive in deep waters, go on crazy trips. It is the spirit of who they are. When you meet them, though they are always in a jacket and tie, and I know that’s not their everyday life. They are like dignitaries, but they don’t act like dignitaries. When all of the families gathered in closeness and an awareness of what they did — with our country as crazy and insane as it is right now — it helps keep me in balance.”

“Men of great character are limited these days. However, six men with whom I recently shared time, easily led the way.”

It is our privilege and honor to help bring recognition to our MIA servicemen and closure to their families. 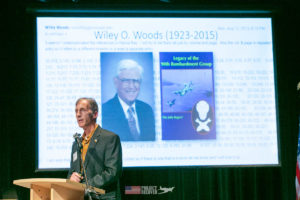 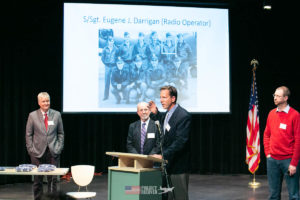 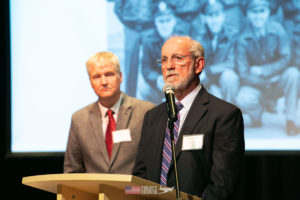 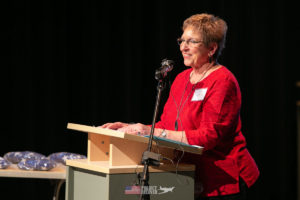 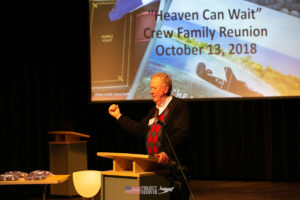 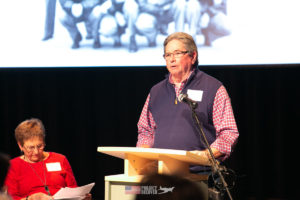 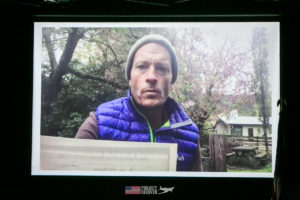 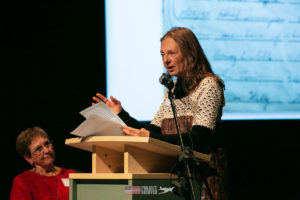 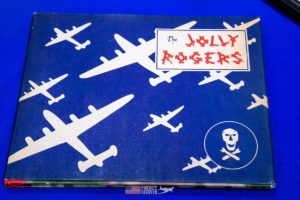 Heaven Can Wait was a member of 90th Bombardment Group: The Jolly Rogers 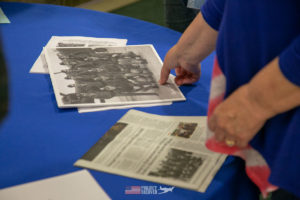 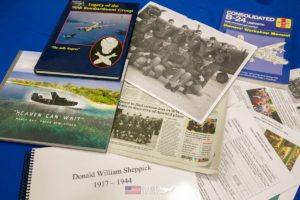 Reading each other’s memorabilia, the relatives learned more about their MIA’s Heaven Can Wait family. 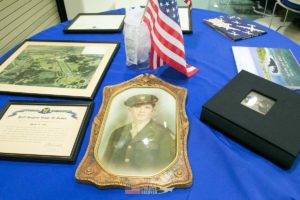 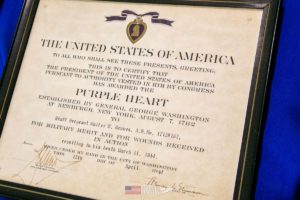 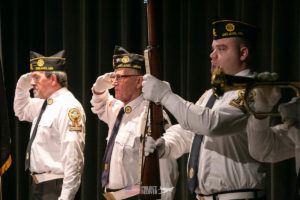 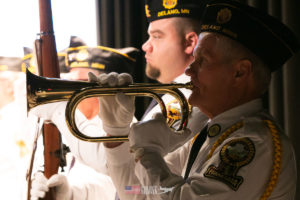 The American Legion honored the Heaven Can Wait crew. 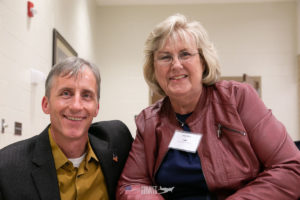 Scott and his Aunt Patsy. 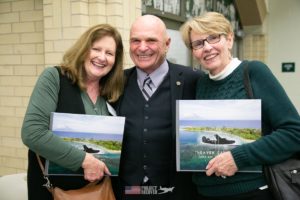 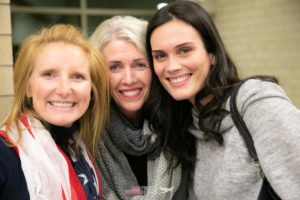 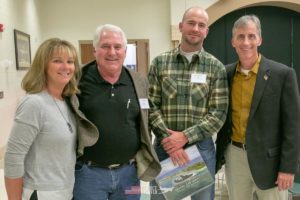 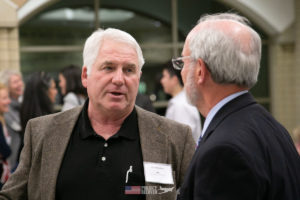 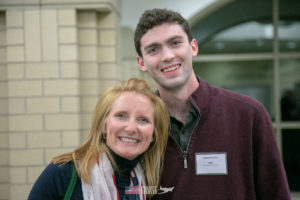 Relatives of the B-24 crew came from around the country. 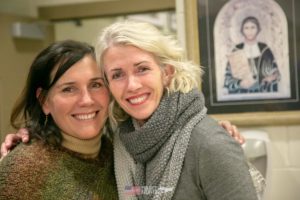 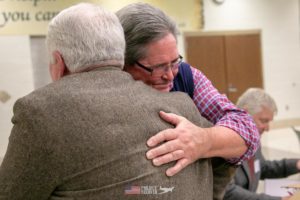 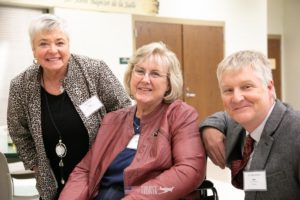 Mark Moline chats with relatives of the WWII B-24’s crew. 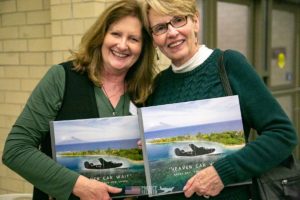 Project Recover compiled a book about finding Heaven Can Wait and gave it as a gift to the crew’s relatives. 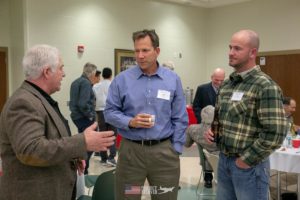 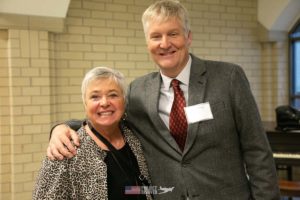 Mark Moline shares a smile at the Heaven Can Wait Family Reunion.

Read more about Heaven Can Wait: