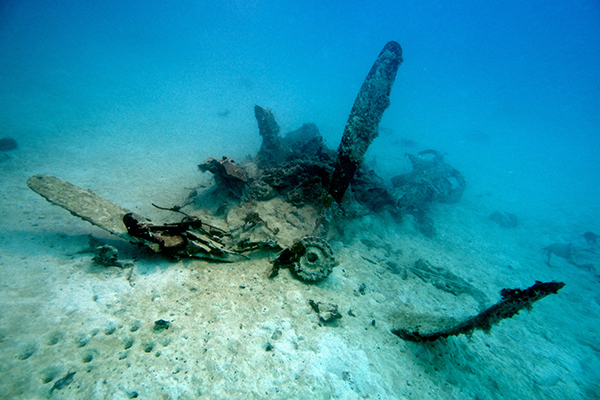 March 30, 2015–Project Recover located a  United States TBM Avenger aircraft lost in World War II and missing for over 70 years was resting in the tropical waters of the Republic of Palau.

The carrier-based dive bomber plane was discovered by a multi-disciplinary team from the University of Delaware’s College of Earth, Ocean, and Environment (UD CEOE), Scripps Institution of Oceanography: University of California-San Diego, the Coral Reef Research Foundation and the BentProp Project.

Scientists used state-of-the-art technologies including unmanned underwater vehicles and high-frequency sonar to search a high probability region of the sea floor, based on months of archival research and the team’s scientific analysis of historical data collected by BentProp over the past 20 years.

The TBM Avenger was lost with two aviators onboard while flying missions in support of Operation Stalemate II, a time period of fierce fighting during the U.S. Marine Corps’ landing on Peleliu. The location of the aircraft and a detailed site survey will be turned over to Palau government and the U.S. Defense POW/MIA Accounting Agency (DPAA), the agency responsible for recovery and identification of remains and the notification of families.

The discovery follows on the heels of an announcement last fall of the location of two other missing aircraft, a TBM Avenger and an F6F Hellcat. The remains of those two aircraft are now slated for recovery by the DPAA later this year, according to BentProp.

The new find was part of an expedition that began mid-March and continues through April. The TBM Avenger site was a priority search target as the historical data analysis suggested there was a high probability of finding the aircraft within a narrow search window.

After several days of missions using the undersea vehicles, sonar identified targets, which divers later verified to be the missing airplane in 100 feet of murky water.

Oceanographers Mark Moline, director of University of Delaware College of Earth, Ocean, and Environment, and Eric Terrill of Scripps were the first on-scene at the historic find, along with members from BentProp. Five other aircraft targets are also on the priority list for the team to search for during this year’s expedition.

“We were really surprised about the find as it is something we passed over last year and only found after re-reviewing the acoustic data,” Moline said. “Given the short period of time we are in country, I have felt an urgency to push and find these sites. It means long hours with technical underwater gear and repetitive actions, but it does pay off. Of course, we are exhilarated about the find, but also mindful of the sacrifices made by these young men. We hope our work will in some way bring closure to the families of these fallen heroes.”

A chance meeting brought the academic and not-for-profit teams together three years ago while the oceanographers from UD CEOE and Scripps were conducting marine research in Palau. Seed money from the U.S. Office of Naval Research enabled the researchers to apply emerging undersea technologies for purposes of finding aircraft associated with MIAs and to provide a platform for public science, technology, engineering and mathematics (STEM) outreach.

This year’s expedition was able to continue through private donor support, in part as a result of the visibility the project received after being featured on the CBS news magazine 60 Minutes and in a popular GoPro video in 2014.

Photos of the airplane by Eric Terrill

Photo of the divers by Project Recover

Read the daily progress reports from the mission: