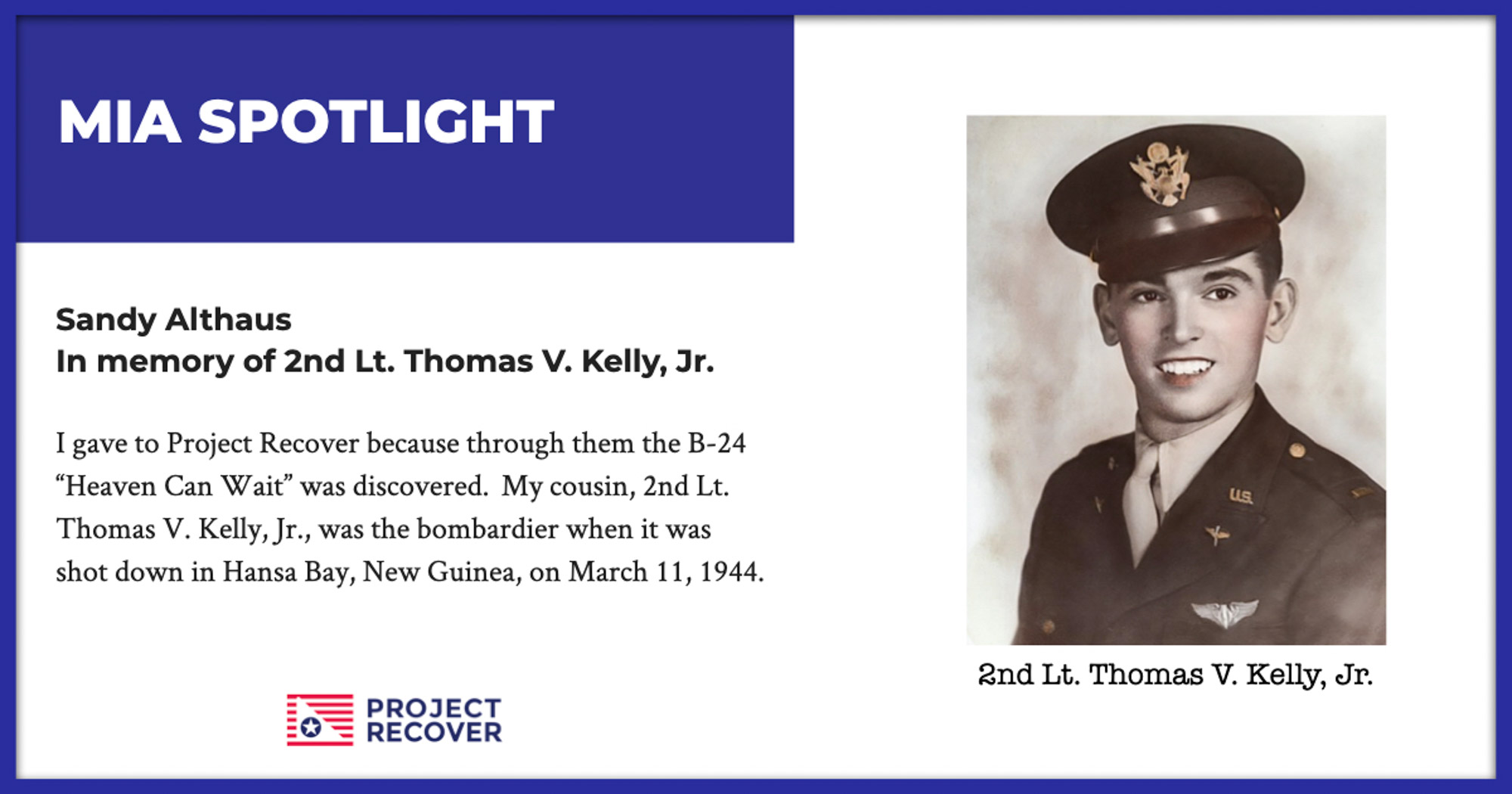 Thank You for Your Support, Sandy!

I gave to Project Recover because through them the B-24 “Heaven Can Wait” was discovered.  My cousin, 2nd Lt. Thomas V. Kelly, Jr., was the bombardier when it was shot down in Hansa Bay, New Guinea, on March 11, 1944. After 74 years as an MIA, my cousin and the other 10 crew members are no longer missing.

On behalf of the family members of Lt. Thomas Kelly, I thank you for valuing what a blend of technology, talent, and compassion can have on the lives of real people. We are all excited to hear about future Project Recover discoveries, and we are confident that the impact will be just as significant for the families involved. (~ Sandy Althaus, Kelly Family Research Team)

My first cousin, 2nd Lt. Thomas V Kelly, Jr (I remember him as Toby) was born and raised in the small town of Livermore, California where the most exciting thing that happened every year was the Livermore Rodeo. As a young boy, he wanted to be “the world champion cowboy” and even had his own horse which he cared for by himself. His friends described him as a great guy, really popular, extremely outgoing, and a lot of fun. Above all, he loved his family and friends.

Toby was very passionate about enlisting in the Army and serving the country he loved. He was very ambitious during training and thrilled to be selected as a commissioned officer serving as a B-24 bombardier. He became close friends with the officers who eventually became the Tennyson crew on “Heaven Can Wait.”  He brought three of them to his home in Livermore, CA to enjoy Thanksgiving 1943 together just prior to being sent overseas to their new assignment in Papua, New Guinea.

Fighting For Your Freedom

While he was stationed in New Guinea, Toby still maintained his friendships with family and friends back home. When he died, he was actively corresponding with some 38 different people in the US. Toby wrote often that his friends and family should not worry about him while he was in the military. Less than a month before his plane was shot down, he wrote a letter to his family.

“I don’t want you to feel sorry for me. I’m just telling you to appreciate what you have, even if you don’t think it is much, because it is so much. The men fighting here for everyone are doing it for your freedom.”

Toby had a generous heart, was passionate about his family, friends and life. He wore his Army uniform with great pride and was truly proud to be an American!

This Donor’s MIA Spotlight was written and made by Sandy Althaus. Sandy Althaus gave to Project Recover in honor of her cousin, Lt. Thomas V. Kelly, Jr. She is a part of the Kelly Family Research Team who, through five years of extensive research, helped locate the B-24 called Heaven Can Wait. The surviving families of the B-24’s crew had a “Heaven Can Wait Family Reunion” after the aircraft was located.