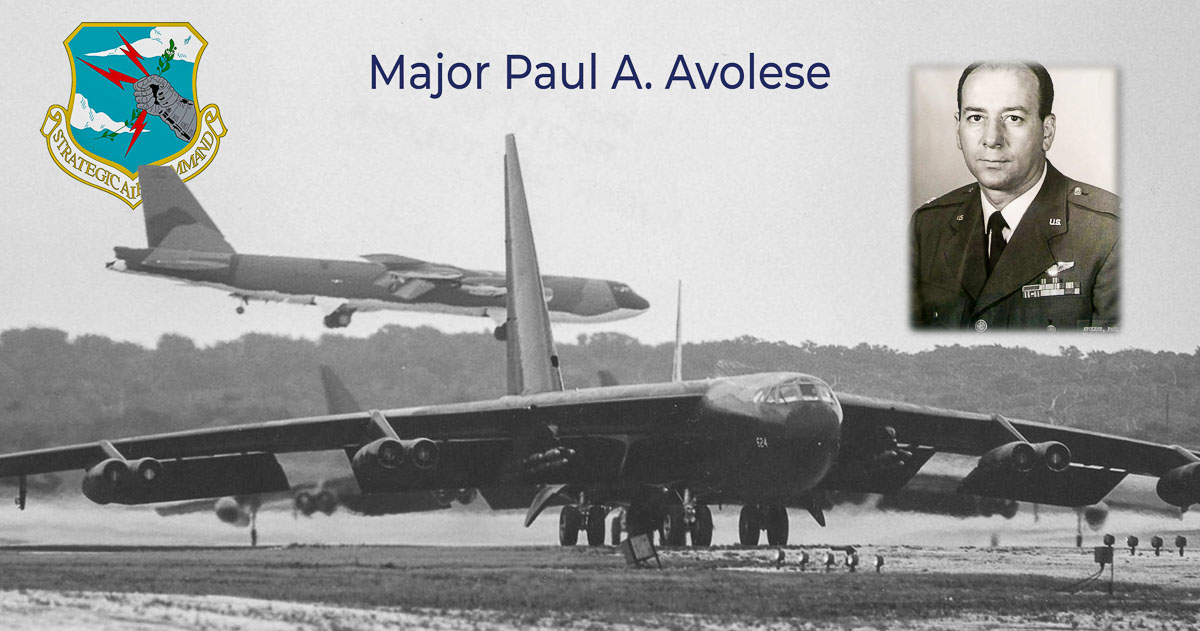 Major Paul A. Avolese Accounted For by DPAA

Major. Paul A. Avolese, 35, a B-52 radar navigator during Vietnam, was accounted for on September 21, 2020, according to the Defense POW/MIA Accounting Agency. The recovery and identification is a direct result of a DPAA and Project Recover initiative in Vietnam. Project Recover is honored to work with the DPAA on their first non-governmental partnership allowed to conduct underwater searches for MIA sites in Vietnamese waters

Major Avolese was in the Air Force under Strategic Air Command, 4133d Bomb Wing (Provisional), 2d Bomb Squadron. On July 7, 1967, Major Avolese was part of a 7-member crew aboard a B-52D Stratofortress, tail number 56-627, call sign “Kilo Red 2.’ They and two other B-52s took off from Andersen Air Force Base, Guam. The aircraft were on a bombing mission against enemy targets east of Bien Hoa, South Vietnam.

Described as the ‘long rifle of the air age,’ the B-52’s were flying west nearly 2,500 miles over the Philippine Sea and then the South China Sea to reach their destination. About 20 miles offshore from Vinh Binh Province, South Vietnam, ground radar directed Kilo Red 2 to change positions with another B-52, call sign Kilo Red 1.

The two B-52s collided during the maneuver. The collision resulted in a huge fireball. Both aircraft broke apart and crashed into the South China Sea. Initially, it was believed there were no survivors as no parachutes were observed.  However, several location beeper signals were received. Search and rescue efforts recovered four survivors from Kilo Red 2. Three crew members from that aircraft were not recovered. Until now, Major Paul A. Avolese was among the missing.

In 2020, DPAA approached Project Recover, represented by Scripps Institution Oceanography. They asked Project Recover to conduct an underwater survey offshore Vietnam to locate the wreckage of the two B-52D aircraft.

Scripps Institution of Oceanography has a history of success both in conducting scientific research in Vietnamese waters and locating MIAs. Working in partnership with the Office of Naval Research and the Vietnamese Ministry of Science and Technology, Scripps studied the complex ocean dynamics of the Vietnamese East Sea. Working in partnership with Project Recover, Scripps has a demonstrated record of success locating and helping bring home American MIAs.

The Scripps research team was led by Drs. Eric Terrill and Andrew Pietruszka. Dr. Terrill is the Director of Coastal Observing Research and Development Center and a co-founder of Project Recover. Dr. Andrew Pietruszka is an underwater archaeologist specializing in the search, documentation, and recovery of American MIAs.

They, along with members of DPAA and the Vietnamese Office For Seeking Missing Persons, deployed modern oceanographic instruments in an attempt to relocate and document the aircraft. The team used a fleet of REMUS 100 autonomous underwater vehicles (AUVs) equipped with side-scan sonar and magnetometer to survey approximately eight square miles of the seafloor.

The survey revealed several targets of interest to be further investigated by SCUBA divers. The SCUBA team further identified several of those targets to be consistent with the wreckage of a B-52D aircraft. The scientific team discovered, and in coordination with DPAA, recovered the remains of Major Avolese at one of these sites.

Dr. Eric Terrill stressed the importance of cooperation between the U.S. and Vietnamese governments as a key factor in their success.

“The success of this program is a testimony to the cooperation between the U.S. and Vietnamese governments.” (Dr. Eric Terrill, an oceanographer at Scripps and co-founder of Project Recover)

“It was an honor to participate in the first-ever partner survey for underwater MIA sites in Vietnam. To successfully locate the site and also recover the remains of Major Avolese was incredible. It’s a testament to what can be accomplished with public-private partnerships.”

When he died, Major Paul Avolese left behind his wife, Marilyn, and four children in East Meadow, New York.

“It is both exciting and humbling to be given the opportunity to locate these sites and bring closure to the friends and families of the fallen.” (Bob Hess, Scripps development engineer and Project Recover team member)