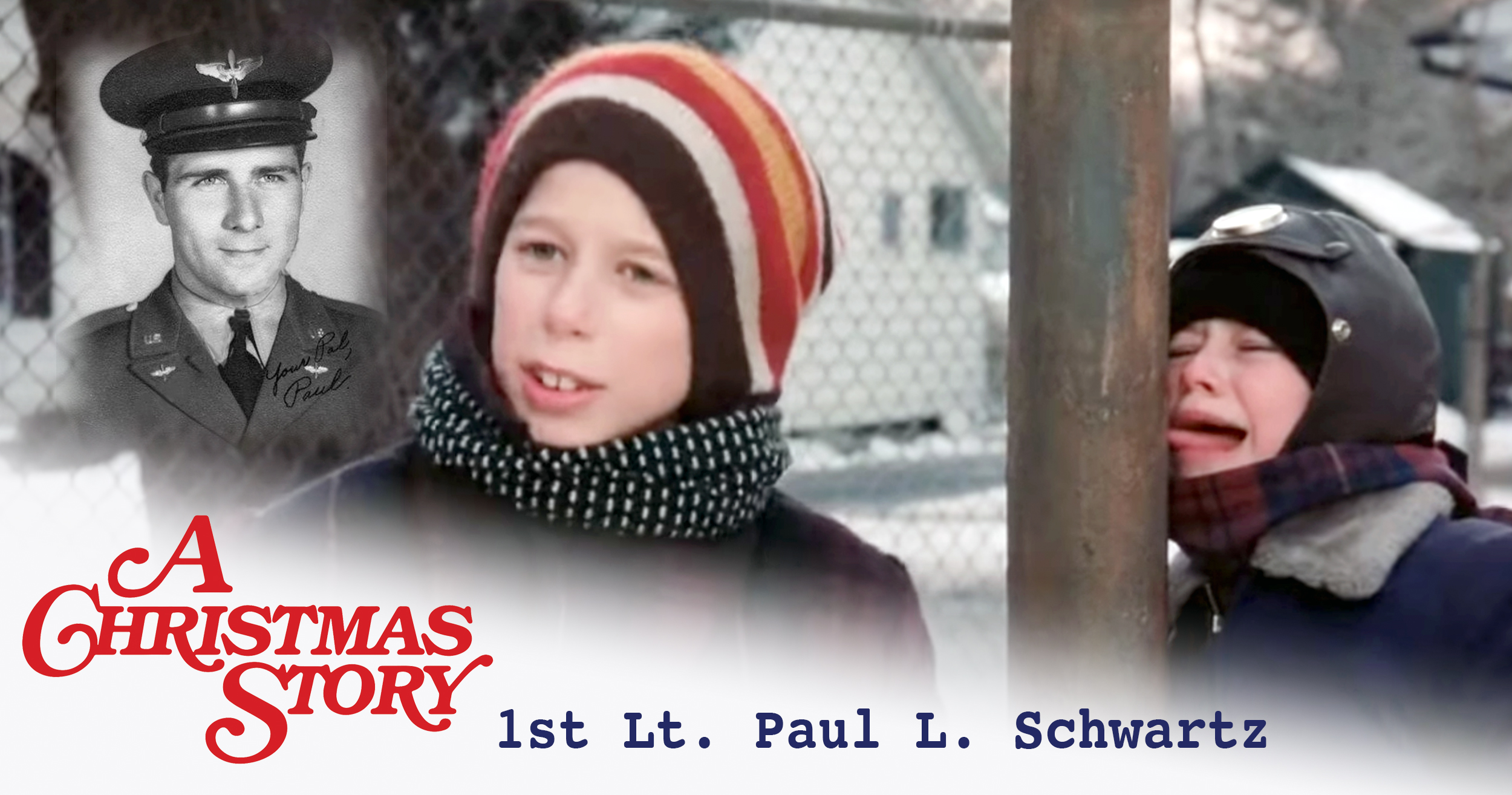 1st Lt. Paul L. Schwartz, an MIA service member from the World War II European Theater, is forever memorialized in the 1983 holiday classic, A Christmas Story, by Jean Shepherd. 1st Lt. Paul L. Schwartz is believed to be the same Schwartz who triple-dog-dared Flick to lick a frozen flagpole — with predictable and memorable results.

The movie is based on a collection of stories by radio personality and humorist, Jean Shepherd, compiled in the book In God We Trust: All Others Pay Cash. In the movie, Shepherd narrates a story about Ralphie Parker. Ralphie is a 9-year old growing up in Hammond, Indiana, who wants nothing more than to get an “official Red Ryder, carbine action, 200-shot, range model air rifle” for Christmas.

Shepherd claimed all his characters were inventions of his imagination, however his stories are also known to be semi-autobiographical. Shepherd’s brother Randy, once told a friend that his brother’s characters’ were based on real people, but were so exaggerated as to be imaginary. LTC Steven Glazer (Ret.), a self-described “desk-chair” military researcher, is credited with researching and separating truth from fiction in A Christmas Story.

Jean Shepherd also had two childhood friends named Flick and Schwartz. Flick was short for Jack N. Flickinger, and Schwartz’s full name was Paul L. Schwartz, who was one year ahead of both Shep and Flick in school.

Schwartz comes up in at least three places in Shepherd’s writings. The first and most memorable is in A Christmas Story scene when Schwartz ‘triple-dog-dares’ Flick to lick the frozen flagpole. The results are unforgettable.

The second is when Ralphie blames Schwartz for teaching him the offensive version of “Oh fudge.” Although he has heard it multiple times from his ‘old man,’ Ralphie describes it as “inexorable official justice” for the flagpole incident. In the movie, both Ralphie and Schwartz are punished soundly by their mothers.

The third, and most relevant to our work at Project Recover, is on page 263 of In God We Trust: All Others Pay Cash. This time, Ralph and Flick are owners of a local bar later in life. (In real life, Flick assumed ownership of Flick’s Tavern after his Dad passed away in 1950.

“I turned back to Flick, who was checking the cash register. “Too bad Schwartz couldn’t have been here,” I said. Flick grunted, busy with his change counting. We both knew that Schwartz had been shot down over Italy. They never found him.” (In God We Trust: All Others Pay Cash by Jean R. Shepherd, page 263)

This is where real life intersects A Christmas Story once again.

Like virtually all young men of their time, the three friends enlisted in the military to serve during World War II. Jean Shepherd joined the US Army and served with the Signal Corps on July 20, 1942. Jack N. “Flick” Flickinger joined the US Army on November 11, 1942. He was sent to North Africa for anti-aircraft duty.

Paul Schwartz enlisted in the US Army on January 29, 1942.  He completed training as an aviation cadet and was commissioned as a navigator. Initially, he was assigned to the 772nd Bomb Squadron of the 463rd Bombardment Group (Heavy) in Europe. By early 1944, however, he was flying strategic bombing missions in B-17s with the 341st Bomb Squadron of the 97th Bombardment Group out of Italy.

In March 1944, Lt. Schwartz’ Squadron was participating in Operation POINTBLANK, an Allied strategic bombing offensive to cripple the German Luftwaffe and lay the groundwork for a successful Allied invasion of France. The RAF and US Army Air Force were conducting bombing raids on aircraft, u-boat, and transportation infrastructure. Coordinated in an effort called the Combined Bomber Offensive, the RAF conducted bombing missions by night and the US during daylight hours.

On the morning of March 19, 1944, 1st Lt. Paul Schwartz and nine other crew members took off in a B-17 from Amendola Air Field in Italy, part of the massive Foggia complex of airfields. They were one of 234 heavy bombers, including B-17s and B-24s, escorted by more than 100 fighters. The original target was the Ball Bearing Plant at Steyr, Austria. There was cloud cover at Steyr, however, and the armada headed for Klagenfurt, Austria to bomb the air depot where the Germans produced Messerschmitt fighter aircraft.

Schwartz’ B-17 took off with the 97th Bombardment Group. They were the last group to take off, but not the last plane.

A B-17 from the 429th Bomb Squadron, 2nd Bombardment Group was delayed. A pitot tube cover had not been removed, and the pilot taxied the aircraft back to have it done so. When B-18 rejoined the fleet of aircraft, they were 15 minutes late and the 2nd Bomb Group was too far ahead. They decided to join the 97th Bombardment Group’s formation.

At 10:35 am, as they slid into formation, the wing of 2nd Bomb Group’s B-17 hit the wing of the 97th’s B-17, Schwartz’ aircraft. The 2nd Group’s B-17 immediately broke in two, caught fire, and crashed into the Adriatic Sea, according to eyewitnesses. Schwartz’ B-17 banked sharply left. Then it, too, crashed into the sea. The formation was flying low at 3,500’, and witnesses saw only one parachute half-deployed at roughly 500’.

Air-Sea Rescue arrived at the scene at 11:25 am. They located the bodies of four crew of 2nd Group’s B-17 and confirmed there were no survivors from the collision. All of the crew of Schwartz’s B-17 were declared MIA and remain so today. In all, seventeen bombers were lost that day.

We remember our MIAs every day through our work and research. Still there are few more poignant times to reflect on our MIAs than at the holidays.

With every story, we remember not just the service members who sacrificed their lives, but also their families who never again would be all together for the holidays.

We are grateful for A Christmas Story for bringing us together for cozy joyful gatherings in the present and for reminding us of the ties that connect us with our past.

Many thanks to Dr. Colin Colbourn, Project Recover Lead Historian. Colin spends the bulk of his days conducting research on our MIAs to help bring them home. He shared this story with the team so we could share it with you. Not only was Colin’s mother born in Hammond, IN, but A Christmas Story is also her favorite Christmas movie, making this story a special one for our historian.

We acknowledge with gratitude that we acquired information from this article from Find-A-Grave website drawing information from a post submitted there by Steve Glazer on August 9, 2015. Not only did Glazer find the connection between Shepherd’s Schwartz and 1st Lt. Schwartz, Glazer also shared that information with the Schwartz family. Prior to that, they were unaware of the connectionn.

Steven Glazer is also the consulting historian on an upcoming documentary being produced about the life and work of Jean Shepherd.

If you are in Hammond, Indiana, there now is a statue now commemorating the Triple Dog Dare. Stop by and remember Shep, Flick, Schwartz and all of our MIAs. If you would like to make a donation to help bring our MIAs home, you can do so here, with our gratitude.