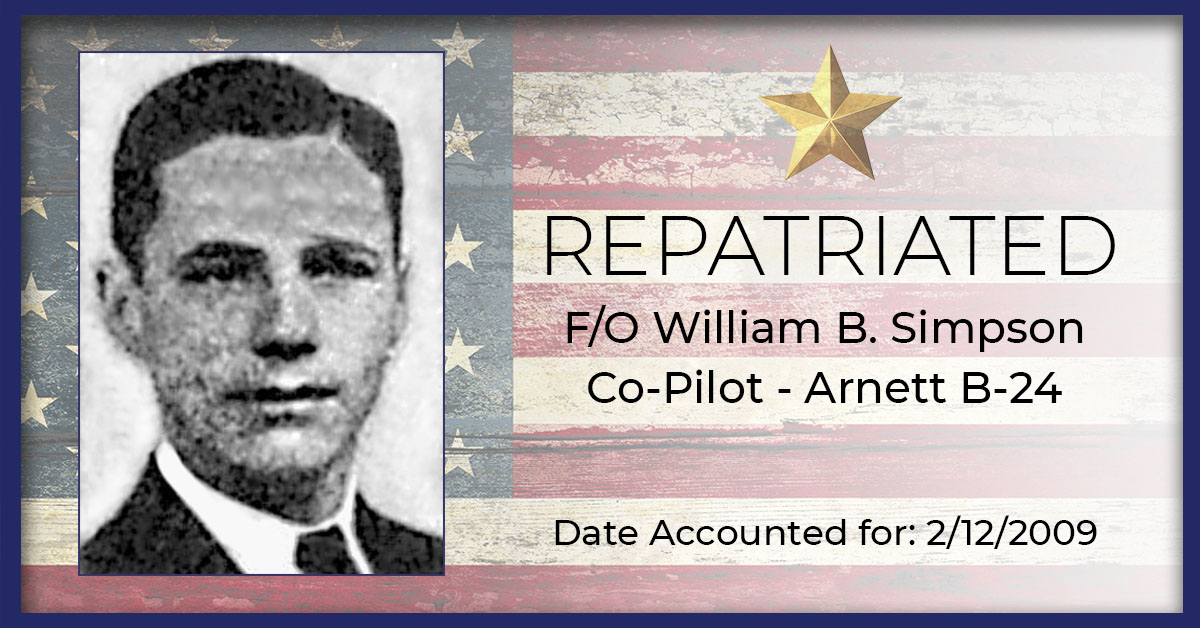 F/O William B. Simpson, 22, was accounted for by the Defense POW/MIA Accounting Agency. Project Recover located his downed B-24 in January 2004 and is honored to play a vital role in his repatriation.

Project Recover humbly acknowledges F/O Simpson’s service and sacrifice, as well as the enduring loss to his family. We are grateful and honored to play a vital role in bringing him home. The repatriation of F/O Simpson helps resolve generational grief and awaken us to gratitude, hope, love, and unity. This is the legacy of our MIAs and their final mission.

The B-24 was shot down on September 1, 1944, on a bombing mission over Palau. F/O Simpson was declared MIA.

Project Recover located the aircraft on January 26, 2004, after a 10-year search. The Defense POW/MIA Accounting Agency (DPAA) repatriated eight MIAs. F/O Simpson was among them. The eight repatriated MIAs were buried together at Arlington National Cemetery. First Officer Simpson was from Winston-Salem, NC.

Three crew members were not recovered from the B-24. They parachuted from the aircraft, were then captured, and executed by enemy forces. They remain MIA.
The plane is featured in a painting by Mark Pestana, entitled Mission: Palau. The story of the search and recovery was featured in the book, Vanished: The Sixty Year Search for the Missing Men of World War II by Wil S. Hylton.