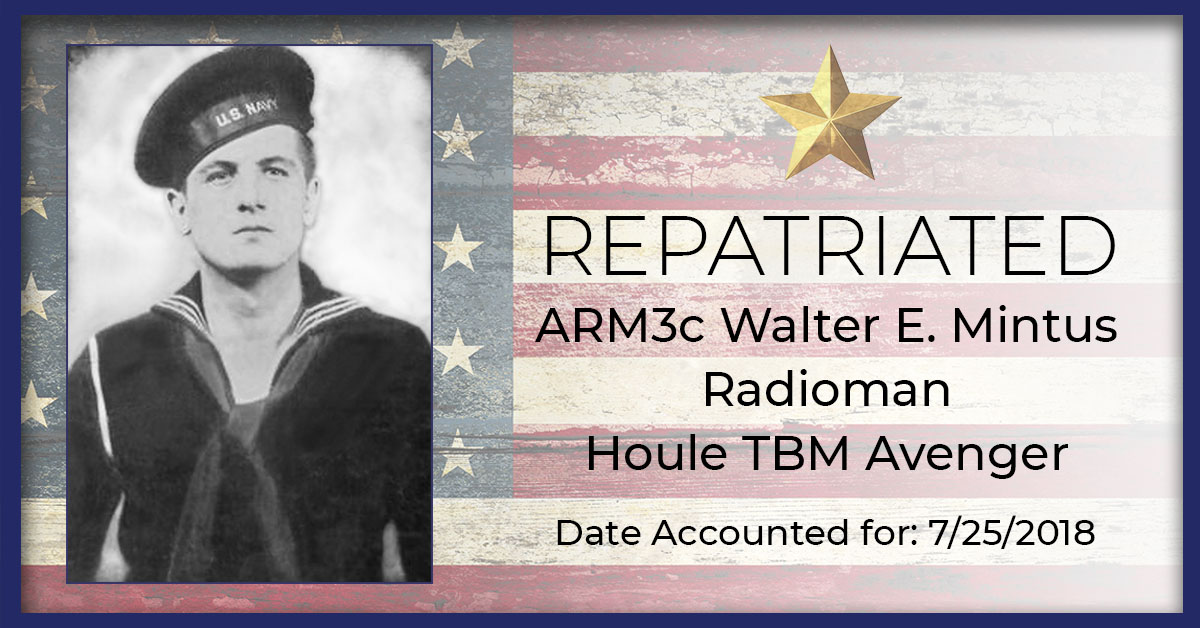 ARM3c Walter E. Mintus, 22, was accounted for by the Defense POW/MIA Accounting Agency. Project Recover located his downed TBM Avenger in 2016 and is honored to play a vital role in his repatriation.

Project Recover humbly acknowledges ARM3c Walter Mintus’ service and sacrifice, as well as the enduring loss to his family. We are grateful and honored to play a vital role in bringing him home. The repatriation of ARM3c Mintus helps resolve generational grief and awaken us to gratitude, hope, love, and unity. This is the legacy of our MIAs and their final mission.

ARM3c Walter E. Mintus, 22, was the radioman on a TBM Avenger piloted by Lt. Roland R. Houle and a member of the U.S. Navy Torpedo Squadron Fifty One (VT-51).

He was known as Uncle Bert to his nieces and nephews, although no one can remember why! He is remembered as a fun uncle who would pile the hay 15’ high for them to play on.

On July 27, 1944, the Houle Avenger took off from the USS San Jacinto. Four planes were on a mission to bomb a Japanese base in Malakal Harbor, Palau. The wingman for the Houle Avenger was a young George H. W. Bush. He was a 20-year-old Ensign in the US Navy at the time. Lt. Houle was his commanding officer. Just two days prior, the pair had flown together to bomb and sink a Japanese trawler.

The Houle Avenger was in the lead position. At one point, his aircraft was separated from the division. The plane was last spotted three to five miles ahead. It was believed to have been spotted on fire in Malakal Harbor. A man, likely Lt. R. R. Houle was seen parachuting into the harbor.

Not long before his final mission, ARM3c Walter E. Mintus sent a record home to his family.

“It wasn’t often, but once in a while, you’d get a record, and it was really nice to hear the voice. He sent a record right before he got killed to his mother and dad,” Tom Kozak said. “It was pretty heartbreaking because they got the record after (Mintus went missing).”

Pat Scannon and the Project Recover team began searching for this aircraft and its associated MIAs in 1994. They found it in 2016, more than 20 years later.

Defense POW/MIA Accounting Agency conducted an MIA Recovery Mission in February 2018. They accounted for two MIAs. ARM3c Walter Mintus was among them.

Project Recover was honored to attend the funeral of ARM3c Walter Mintus in his hometown of Portage, PA, in November 2018.