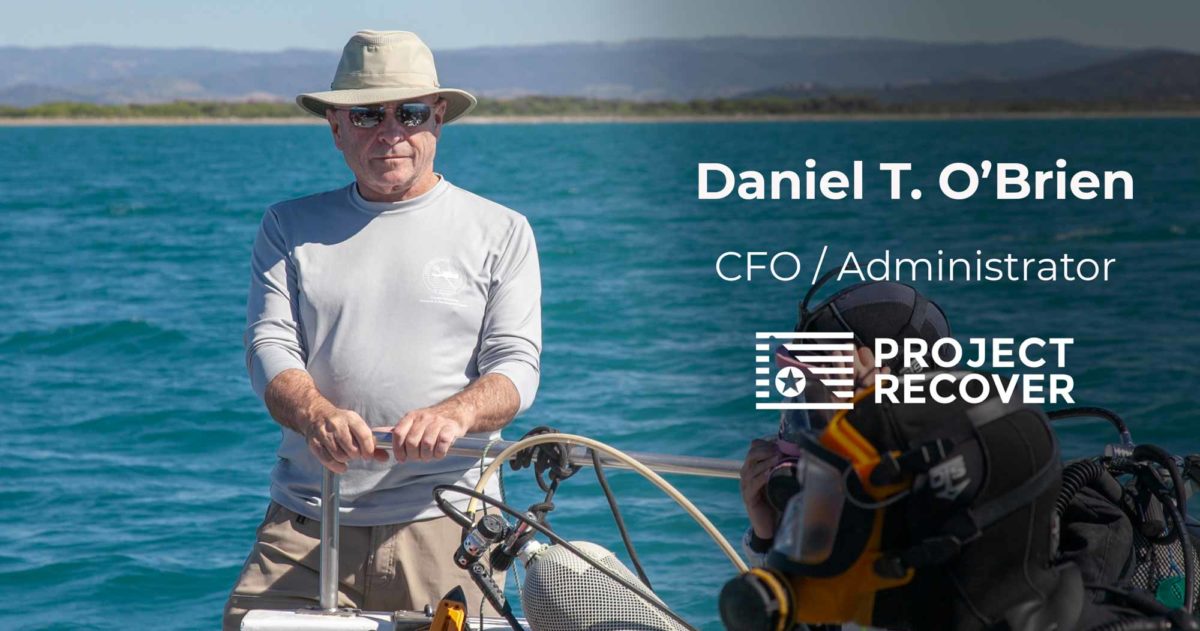 Daniel T. O’Brien has been a Project Recover team member since 2001. He is on the Board of Directors and is also the CFO / Administrator of Project Recover.

“Searching for MIAs started out as a chance to continue traveling to distant corners of the world for skydiving adventures but now with Pat Scannon in search of MIAs in 2002. It turned into a life-changing event when I was involved with discovering my first MIA site with the team. Eventually, this led to team interactions with  MIA families, which brought even greater purpose and connection to our work. It was a very rewarding, emotional piece of the puzzle and became all-consuming.”

Dan is more than a skydiving enthusiast. He took his first jump in 1975. He has more than 10,000 jumps under his belt and has spent more than 168 hours (over a week) in freefall. Dan holds multiple world records, including one with 400 skydivers in freefall formation. Dan co-owned a skydiving business, SkyDance SkyDiving, Davis, CA  from 1986 to 2000.

Dan is one of 100 skydivers from all over the world that jumped into the opening ceremony of the 1988 Olympics in South Korea.   The Seoul Olympic Skydiving Exhibition Team (SOSET), included the US Army’s Golden Knights, and they trained for the Olympic opening ceremony at SkyDance using a US Army Boeing CH-47 Chinook helicopter,

In 1996, when Pat Scannon, Project Recover founder, wanted to skydive to better understand the MIA’s experience, it was natural their paths would cross.

Pat chose SkyDance for his Accelerated Free Fall (AFF) training. In a matter of time, Dan heard from his instructors that one of his students ‘searched for MIAs in the South Pacific.’ Dan was intrigued and said he “had to meet him”.  The introduction marked the beginning of Dan’s obsession with bringing MIAs home.

Dan loves to learn and is devoted to family. Though he excelled in high school and through two years of college, when his family needed financial support, Dan quit school and went to work.

His resume reads like a list of dream jobs, specially designed for curious and active boys. Dan has worked in the construction field; industrial demolition ( to include the implosion of industrial buildings), an ironworker,  a telecommunications technician, construction management positions, then started an aviation business, SAG stuntman, a member of BentProp/Project Recover, started a 501c3 charity as a Board member, produced a documentary film, and then became the CFO and administrator of Project Recover.

While Dan initially worked to support his family and his skydiving habit, he also picked up innumerable skills along the way. Those skills — from people skills, parachute rigging, hydraulic systems, construction tools and systems, operating small and large construction equipment, as well as project management skills — all have helped do what he does best. Stay calm, organized, and mission-focused while steering a highly qualified goal-driven team through complex operations to accomplish the task at hand.

As the co-owner of PreStar Aviation, Inc., the parent company of SkyDance Skydiving, he was the President and General Manager of day-to-day operations, project development, and oversaw safety and regulatory compliance.

Dan was the Olympic Skydiving Team and World Team Assistant Director, responsible for assisting in the planning and execution of high altitude world record attempts, over a 15 year period. In that position, he coordinated with military and government officials from multiple countries to use aircraft in association with team members.

For Dan, high performance and flexibility are priorities. Over time, he gradually felt the thrill of owning a skydiving business evolve into the weight of being a business owner. After SkyDance hosted the Seoul Olympic Skydiving Exhibition Team (SOSET) training, word got out. Film crews used SkyDance assets and their location in the foothills of Northern California for their commercials and movies. (Dan extends thanks to his skydiving friends and mentors; BJ Worth, Jake Brake, and Jake Lombard, for making that happen.)

Dan met skydivers who were involved in the film industry, and the die was cast. In 2000, Dan sold SkyDance Skydiving and became a Hollywood stuntman. In this role, all of Dan’s professional experience proved exceptionally valuable.

A member of the Screen Actors Guild (SAG), Dan found himself in a unique position of being both a member of the stunt community and in an exclusive club of Hollywood actors. Dan coordinated with film departments and operated all the equipment to install acceleration and deceleration systems and associated rigging. Similar to his role at SkyDance, Dan’s job was to make actors feel comfortable, confident, and safe as he propelled them through stunts or, in short, “saved their lives”. Dan also had a few on-camera appearances, doubling for “Hollywood actors”. Dan especially enjoyed working with many actors, including Kirsten Dunst, Adam Sandler, Charlize Theron, and Tom Cruise. Dan says he was a part of many notable and some not-so-notable films. His favorites among the notable are Living Daylights, Air Force One, Spiderman, Minority Report, Mr. Deeds, Planet of the Apes, and Aeon Flux.

Combining his experience with the film industry with his passion for finding MIAs, Dan co-produced and co-directed the first documentary about Dr. Pat Scannon and The BentProp Project. The documentary tells the story of the search for American MIAs in the Pacific Theater decades after they were declared missing. The moving documentary explores the impact that our MIAs — and finding them — have on their families. (You can watch “Last Flight Home” on Amazon Prime or Project Recover’s YouTube channel.)

Over the last ten years, Dan’s focus has shifted almost exclusively to bringing our MIAs home. He plans Project Recover missions and coordinates all the logistics and safety details. He is the workhorse behind the scenes, establishing Project Recover as a non-profit in 2003. He assists with solicitations for donations and manages the marketing team to further public education and fund field expeditions.

“Get obsessed, and stay obsessed,” he told them.