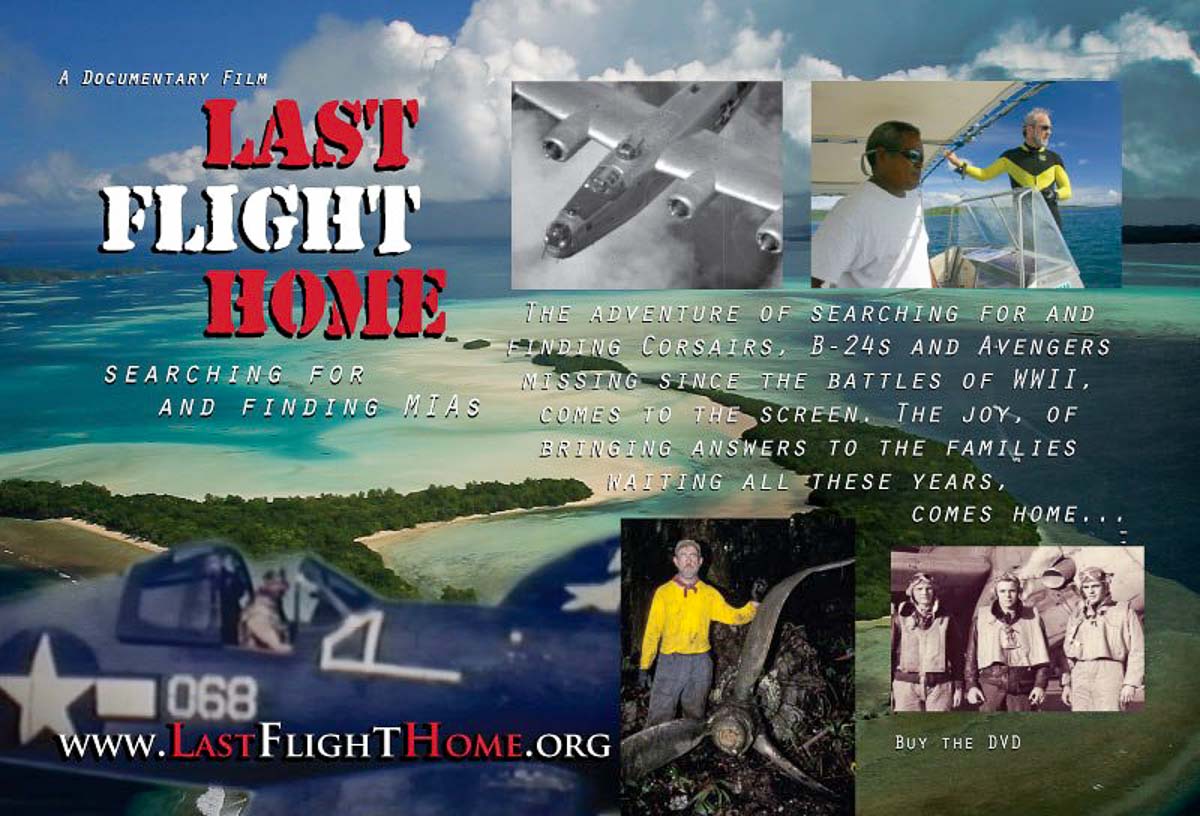 The ‘Last Flight Home’ documents the story of Dr. Patrick Scannon’s work searching for and finding missing World War II aircraft and the MIAs associated with them in Palau. A ferocious battleground nearly forgotten by history, yet more than 200 US aircraft went down on and around the islands. Almost half of those with crew now listed as Missing In Action.

Over 60 years ago all the familes got was a telegram. Whereabouts unknown, Missing In Action. And over the generations these families have refused to forget and refused to stop waiting. For an answer, for their return, for some clue as to what happened. Surprising though it may be, hope has remained. Then, the phone call out of the blue, “Are you the nephew of Arthur Miller?”, finally brings the answers. Dr. Scannon furthers his research into the MIAs of Palau by scouring the National Archives, After Action Reports, and interviews with veterans of the campaign, no stone left unturned.

Scannon’s small team of self funded private citizens have taken on these tasks simply as a way of thanking the MIAs and their families for the sacrifices made decades ago. Our film follows the story of three searches in Palau and the families touched by the work. Filmed over the course of nearly six years and seven expeditions to Palau, where we thought the adventure was to be found. It was our delight to discover the adventure and heart of the story here in the U.S. with the families.”

Six years of blood, sweat, and tears in combination with a huge roller-coaster ride of emotions that has lasted for seven expeditions to Palau since 2001, interviews with families of the MIAs in our story in seven US states, all of this to amass over 230 hours of footage and in the process go through six pairs of jungle boots, three wet suits and two skin suits, one pair of sunglasses (that were re-found in the debris field of an MIA Corsair site), numerous bumps, bruises, and blisters, untold amounts of sashimi devoured, over two dozen U.S. aircraft found, nearly 20 MIA mysteries solved, and countless hearts touched.

Experience the Find, Feel the emotion, Imagine the beginning

Vanished, a book about the plane in the film “Last Flight Home.” A sweeping narrative comes the true story of the missing men, their final mission, and the real reason their disappearance remained shrouded in secrecy for so long. This is a story of love, loss, sacrifice, and faith — of the relentless determination of archaeologists and explorers to solve one of the enduring mysteries of World War II.

“Congratulations on a touching, restless haunt of a film.  …one stops breathing, to watch………
wonderful sensitivity, knowing when to press and when to back off quietly and let the story whisper for itself. Now I take inspiration from you two, finding you conquered the “no edge” arguments. It never crossed my mind that your film, born of desperate conflict, shows no desperate conflict! I was riveted and inspired in a wonderfully subtle way by the quiet, long-term, unswerving determination of the man and the group.
You catch these wild contrasts beautifully…no exclamation points, no fanfares. So softly do they sing on their own.The final line and the end is filmmaking at its best. I’ve been deeply impressed, Last Flight Home did not let me go for a long time after the screen went dark…”

I went to the special screening of the Documentary “The Last Flight Home” which was produced by AGA member Jennifer Powers. It is the story of Dr. Patrick Scannon’s work searching for and finding missing WWII aircraft in Palau and the MIAs associated with them. I had to let you all know that Jennifer did a truly outstanding job on the documentary!!! As a Navy Veteran, I am so impressed with the work done by the Bent Prop Project crew … and this film is absolutely amazing, and evidence that those still listed as MIA are not forgotten. Congratulations Jennifer on a film that is truly Well Done!!

I’d like to tell you about Last Flight Home and Jimmie Doyle and his son Tommy. But before I do, it’s only fair that I declare a personal interest: my father was a naval aviator during WWII and flew many missions against the Japanese during the same period and not far from where this superb film is set. But I get ahead of myself …

In 1993, as part of an expedition searching for a Japanese trawler sunk by Ensign George H. W. Bush in July 1944, Dr Pat Scannon saw an aircraft wing near the Palau shoreline. His guide knew nothing of its origin or the fate of the crew. “You can’t have this kind of catastrophic failure without death,” Scannon said, “and the scene just overwhelmed me … I didn’t want them to be forgotten.” Six years later, the BentProp Project took form.

More than 200 Marine, Navy, and Army Air Corps planes were lost over the Palau Islands, where Scannon and his team of volunteers give up vacation time to search for crash sites. Their annual trips have recovered the remains of more than fifteen MIAs, whose surviving family members knew only that a father, brother, or husband died defending his country there.

Jennifer Powell and Dan O’Brien’s filmis part history lesson, part detective story, and all human interest, segueing effortlessly from jungle and watery searches, to profiles of lost airmen, to interviews with their families. While each of the vignettes is guaranteed to touch your heart, none is more moving than the discovery of the fuselage of a B-24. Matching serial numbers with US Air Force records revealed it was the Liberator Jimmie Doyle boarded on the last day of his life. Half a world away, his son Tommy received a telephone call from Pat Scannon.

“That was just like a dream come true that wasn’t ever going to,” Tommy remembered. “Somebody’s actually found this thing, sixty years on …”

Last Flight Home is a testament to fallen warriors, the families who remember them, and the small group of men and women dedicated to finding and honoring them.

As I said at the beginning, my father flew in that war. He came home. Jimmie Doyle and thousands of others did not.

Jim Hooper, author of “100 Feet Over Hell” and war correspondent

“I can only admire in awe the difficulty of capturing pent-up emotions of the family members with
such compassion and disciplined silence……It’s an exceptional and powerful documentary….”

“……..The Last Flight Home is a powerful film that should not be missed…….powerful stories of family members and those who see that these men are not forgotten….”

“…that was incredible, I never expected the movie I just saw, a wonderful artful powerful film …

“I just wanted to congratulate you again on the documentary. The film was really good, but the work you guys do is AWESOME! I sent in my check this morning!”

“The film was slotted on the last day (Sun.) and the last showing (730pm) and was still sold out! That NO one left for the Q&A says it all almost— what said it all were all the red eyes we saw in the audience.”

“I want to let you know amazed I was to see the film. I had no idea to the extent of the mission and the success that has been made. To meet the key players and the film makers, the emotional feeing in the room was incredible.”

“Three weeks ago I saw the film “[L]ast [F]light [H]ome,” I cannot tell you how impressed I was with this documentary … please advise me as to where I can purchase a copy … It’s a story I want to share locally and hopefully gain more support for your efforts.”

“In August of 1993 with the finding of the trawler sunk by GHW Bush in July of 1944 just off an island of Palau a forgotten portion of the former President’s war activities came to light. With Dr. Scannon’s continuing research into the battles over Palau and his search for Lt. R. Houle, GHW Bush’s leadman, who went missing over the islands it is highly probable that Dr Scannon will be able to fill in these missing pieces of history.”

“…while much has been written about other battles of the Pacific theater, Palau and her battles have been all but neglected. The men who fought these battles deserve no less recognition for their valor and sacrifice. Dr. Scannon and his BentProp organization are making this chapter in aviation history a better documented campaign and it is a great service to these brave men and their families…”