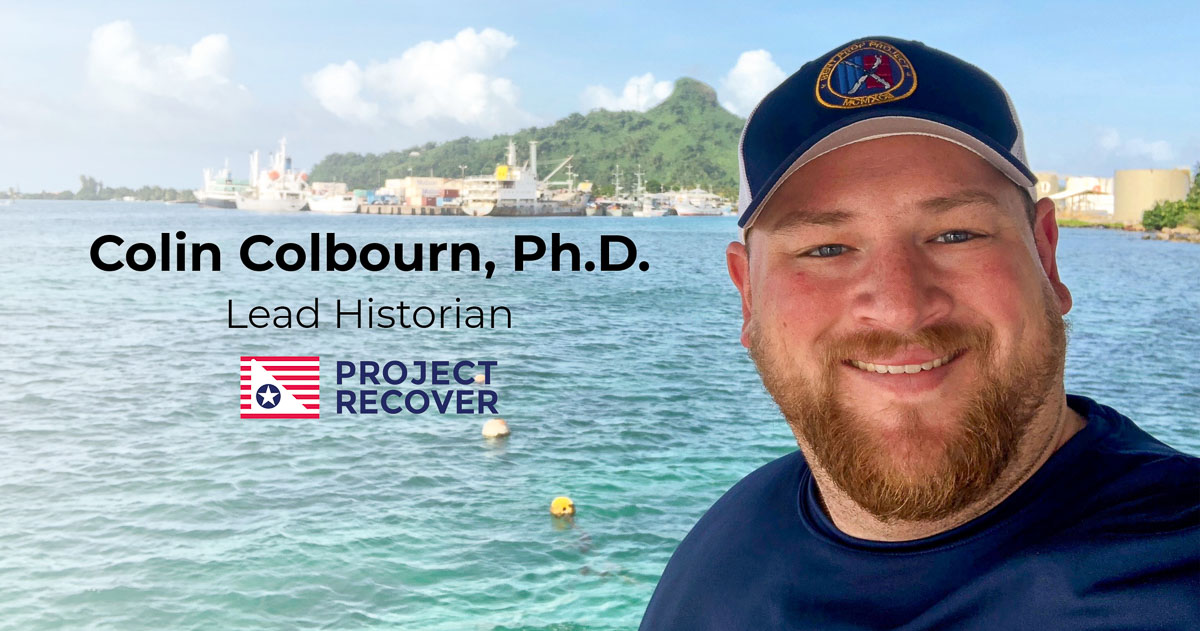 Colin Colbourn, Ph.D., is Project Recover’s Lead Historian and a Postdoctoral Researcher with the University of Delaware. Since 2016, he has managed historical operations including archival research, data management, case analysis, and field investigations. Through these efforts, Project Recover has developed a massive internal archive comprised of thousands of historical reports, maps, and images.

As a Postdoctoral Researcher, Colin Colbourn works closely with Mark Moline, Ph.D., co-founder of Project Recover. In this capacity, he develops MIA cases with the team of oceanographers and AUV/ROV experts at the University of Delaware. It is a collaboration that, like Project Recover, relies on mutli-disciplinary expertise to approach the MIA mission from different angles.

“I do this work because I am not only passionate about the historical challenge, but also because with our team and our technology, I can transform the mundane days at archives and museums into real answers for families who have mourned the loss of their loved ones with no answers for so many years.” Colin Colbourn

Colin’s mission was to help find and identify missing service members from World War II that were buried as Unknowns. His target geographical area included, initially, the Mariana Islands and, before long, Palau as well. It was then, he learned about Pat Scannon, Project Recover founder.

“You can not work on finding MIAs in Palau and not come across Pat Scannon.”

Colin’s work with MIAs at DPAA was a profound introduction to applying historical research toward making a difference in people’s lives today. The meaningful nature of the work stuck with him and eventually led him to Project Recover.

After working at the DPAA, Colin Colbourn had a unique opportunity to create a digital textbook for the U.S. Military Academy at West Point. In 2015, Colin went to work as a Historian and Associate Editor with Rowan Technology, a publishing partner of West Point. He helped build and manage the fully digital and interactive publication, The West Point History of Warfare. The text is used by all cadets in the “History of the Military Art” course.

In 2016, as the project with Rowan Technology wound to a close, Colin contemplated his next career move. He reflected back on his time searching for and finding MIAs with DPAA.

“Finding MIAs is something that, once you do it, it’s hard to get it out of your system. Everything else seems a little less meaningful,” Colin said.

Colin had spoken with Pat Scannon once before. He remembered Pat clearly, but was uncertain if Pat would remember him. Colin sent him an email anyway. It was a short email that got straight to the point.

“If you are in need of a historian, I’m experienced and can add value,” Colin wrote. It wasn’t long before he heard from Pat. “I think we have a confluence of interests,” Pat wrote back.

“When I was first learning how to be a historian, I realized I really loved doing applied research. I really loved being able to solve complex puzzles and problems using the archival record. When I found I could do that and have an impact on families lives and even, in some way on someone who died, I knew this was what I wanted to do.”

Dr. Colin Colbourn spends the majority of a typical day preparing for a mission deep in analysis. He pores over after-action reports. He searches for each individual and aircraft incident in newspaper clippings and books that mention their names as well as in military records. He wants to know everything possible about a case; the aircraft, the MIAs associated, their mission, the crash, the witnesses. Then he scours the angles to find everything he doesn’t know; anticipate and plan for the unexpected.

To learn more about an incident, Colin routinely conducts research at the National Archives and Records Administration (NARA) for the after action reports and war records, and the Smithsonian Air and Space Museum archives for aircraft history and accident reports. He is also a regular at the Air Force Historical Research Agency in Montgomery, AL, and the National Personnel Records Center in St. Louis. He is looking for pieces of the puzzle as he works with oceanographers and engineers to narrow down search areas for missing service members.

As he gathers information, Colin enters them into a custom database. Each case has information entered about associated individuals, the aircraft, and the loss incident itself. He uploads all the relevant documents pertaining to a given case and plots the information on maps. The database which Colin helped developed now has over  500  cases entered, representing nearly 2,500 MIAs

Preparing for each mission requires an intensive amount of research. In preparing for the missions to Truk, for example, Colin needed historical information on 36 different cases involving more than 150 personnel. Alternately, for the missions to Italy, Colin gathered extensive research on 15-20 relevant cases. Of course, there are many missions around the world, and Colin prepares the historical research documentation, case development, and mapping for all.

As Lead Historian, Colin is often the first team member who responds to an MIA family inquiring about their family’s MIA. This is a very important role, and one he takes seriously. As a part of Project Recover’s agreement with DPAA, the team can not reach out to MIA families to share information. However, if an MIA family reaches out to Project Recover, we can share the information we have with them.

Colin shares any information he and the team have acquired, if any, with families requesting info. He also welcomes any new information families have to share. (Families who are just beginning their research may be interested in reading How To Research Your Family’s MIA.)

Colin did not go on mission with DPAA, and he didn’t have expectations of going on missions with Project Recover. Even as a Master Diver and a Rescue Diver, Colin is clear he came to the Project Recover team as a historian. “I can hold a tape measure for the archaeologist underwater,” Colin said joking about the value his SCUBA skills bring to the team. From that perspective, he sees that missions are not to be confused with fun dive trips. They are field investigations, and diving is just a small part.

Still, he was not with Project Recover more than four months when he was asked to join them on a mission to New Caledonia. Colin had traveled extensively to battlefields around the world while in graduate school. Still, the significance of going on a very specific mission, spending time underwater with MIAs, and talking with local people was weighty.

New Caledonia is a small collective of islands 750 miles east from Australia in the Pacific Ocean. It was the most beautiful place he had ever seen. His first mission was special in a variety of ways. Colin worked collaboratively with Pat Scannon on the mission. He also conducted his first oral history there with the local island population. Together they learned what the paramount chiefs saw so many years ago.

In addition to working side-by-side with his teammates, Colin learned how valuable going on a mission was for historical research and for the team. Colin had experienced the unmatched depth of knowledge that Pat brought to the search in Palau. Pat knew every case, every MIA, every aircraft, the people and the land of Palau like no one else. As the team’s historian, Colin, realized he could bring a similar depth of knowledge, especially of the cases, to missions everywhere else.

There was yet another reason Colin’s first mission was special. His great uncle,1st Lt Charles E. Howell, flew a B-17 in World War II. He was killed in action on November 21, 1944 over Germany. In New Caledonia, the team was searching for a B-17, like his uncle’s, with nine associated missing service members.

Of all the places he has traveled to with Project Recover, Colin is perhaps most attached to his time in the Truk Lagoon, today called Chuuk in the Federated States of Micronesia. He has been there four times and spent almost all of his time there talking with locals and searching for World War II POWs and MIAs.

The team found three planes there associated with Operation Hailstone. The fact that Project Recover was one of the first organizations to make a concerted effort toward finding MIAs there was an eye-opening experience for Colin.

“It’s like Palau was in the 1990’s when Pat first began searching for MIAs there,” Colin said.

Colin lives with his wife, Rachel, and his dog, Mason, in Virginia.  Together, they enjoy traveling along the east coast and internationally as well as spending time at the beach.

“Coming from small-town Indiana to a big Marine base was quite a shock to the system! I was especially intrigued by what made the Marine Corps seem like such a special, even elite service. The Marines became my primary area of expertise as a historian and eventually led me to Project Recover!”

Though writing is important, Colin connects with history most through his work with Project Recover. In it, he has found his passion and purpose: solving complex historical puzzles for present day impact.

“I pour everything I‘ve got into solving mysteries for MIA families,” says Colin. “If I receive an email from a family after hours, I may start searching for their MIA at 9 o’clock at night.” https://www.projectrecover.org/dr-colin-colbourn-and-1st-lt-charles-buddy-howell/