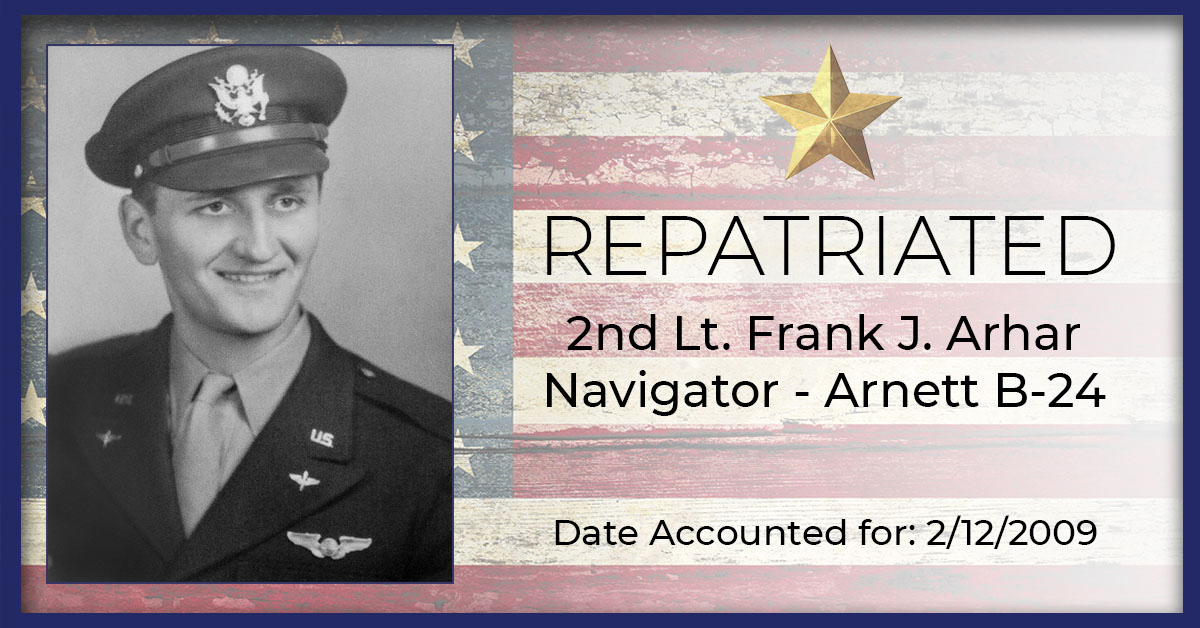 2nd Lt. Frank J. Arhar was accounted for by the Defense POW/MIA Accounting Agency. Project Recover located his downed B-24 in January 2004 and is honored to play a vital role in his repatriation.

Project Recover humbly acknowledges 2nd Lt. Arhar’s service and sacrifice, as well as the enduring loss to his family. We are grateful and honored to play a vital role in bringing him home. The repatriation of 2nd Lt. Arhar helps resolve generational grief and awaken us to gratitude, hope, love, and unity. This is the legacy of our MIAs and their final mission.

2nd Lt. Frank J. Arhar, 23, was the navigator on a B-24 piloted by 2nd Lt. Jack S.M. Arnett. Frank was a tall, friendly man who the crew took to calling the Big Stoop. The Big Stoop was a well-known movie character at that time The crew was informally known as the Big Stoop Boys.

The B-24 was shot down on September 1, 1944, on a bombing mission over Palau. Project Recover located the downed aircraft on January  26, 2004,  after a 10-year search. The Defense POW/MIA Accounting Agency (DPAA) repatriated eight MIAs 2nd Lt. Frank J. Arhar was among them. They were interred together at Arlington National Cemetery in 2010.

“Naturally it’s bittersweet,” Ernie said as reported in the Southern Illinoisan at the time. “You’re glad to have him home, but you would much rather have him home alive. I was happy to have him come home one way or another. We’re thankful, I just wish my mother would’ve been alive, and my dad – they died hoping.”

“We never gave up hope, but there really wasn’t much hope after 60 years.”

There is a memorial marker for him at Saint Joseph Cemetery in Beaverdale, PA.

Three crew members were not recovered from the B-24. They parachuted from the aircraft, were captured, and then executed by enemy forces. They remain MIA.
The plane is featured in a painting by Mark Pestana, entitled Mission: Palau. The story of the search and recovery was featured in the book, Vanished: The Sixty Year Search for the Missing Men of World War II by Wil S. Hylton.