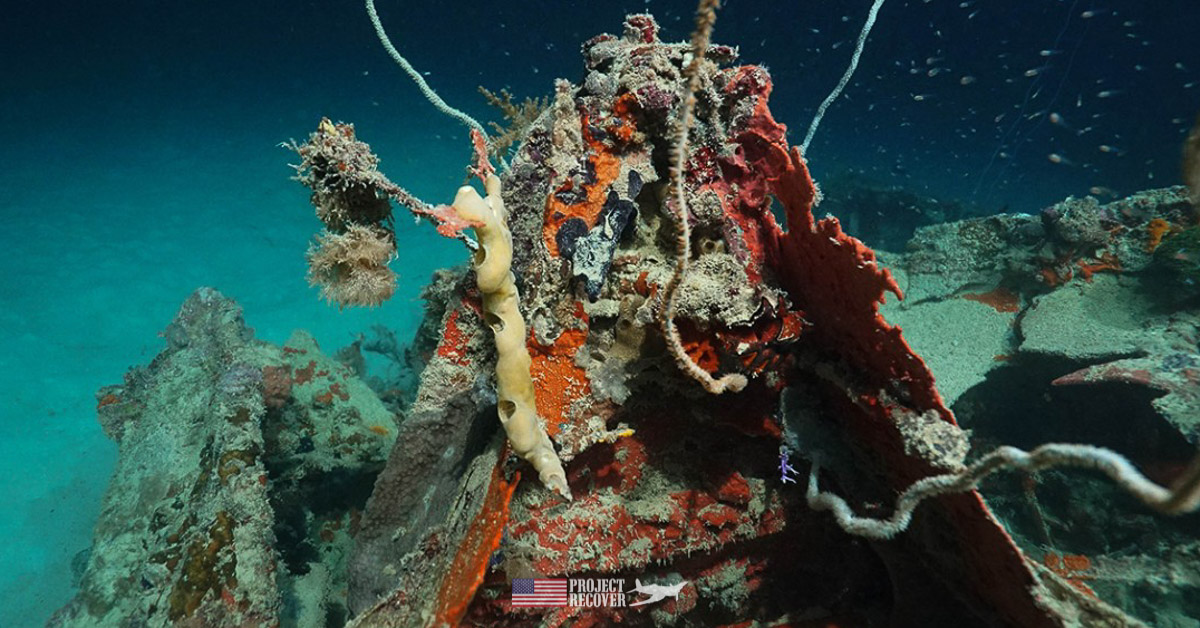 May 25, 2016–An American aircraft, a TBM-1C Avenger,missing since July 1944 was recently located in the waters surrounding the Pacific Island nation of Palau by Project RECOVER — a collaborative effort to combine the most advanced oceanographic technology with advanced archival research methods to locate aircraft and associated Americans missing in action (MIA) since World War II.

Scattered among the lagoon waters and coral reefs surrounding Palau’s island chain, and concealed within its dense mangrove forests, are several dozen U.S. aircraft and the remains of as many as 80 U.S. airmen. This U.S. Navy TBM-1C adds to the growing list of wrecks discovered by Project RECOVER.

“The importance of our mission is reinforced with each new discovery of a missing aircraft,” said Eric Terrill, an oceanographer from Scripps Institution of Oceanography at the University of California San Diego, one of Project RECOVER’s three founding entities. “But this is more than reconnecting with history; it’s about locating the missing to enable the U.S. government to bring them home for a proper burial. With potential recovery sites around the world, Project RECOVER and its team of researchers and volunteers are expanding to intensify its searches using modern science and technology.”

The most recent find was made possible by a substantial financial commitment from Dan Friedkin, founder, and chairman of Air Force Heritage Flight Foundation and chairman of Gulf States Toyota and The Friedkin Group. As a member of the Project RECOVER team, Friedkin’s continued support is helping sustain ongoing missions, while enabling the organization to innovate its technology and expand its search and discovery efforts to focus areas around the world.

“This recovery is another step closer towards Project RECOVER’s goal of finding the final underwater resting places of all Americans missing in action since World War II,” said Friedkin, one of nine civilian Heritage Flight pilots qualified to fly in formation with U.S. Air Force single-ship demonstration teams. “As someone who gained a passion for flying and admiration for our country’s brave service members as a child, I will continue to support the efforts of Project RECOVER and their partner organizations. Every family member impacted by the loss of a service member deserves this type of closure.”

Upon locating this TBM-1C Avengerand other U.S. aircraft, Project RECOVER provides detailed information about discovered wrecks and possible links to airmen listed as missing in action to the Department of Defense’s Defense POW/MIA Accounting Agency (DPAA). DPAA is tasked with recovery and repatriation efforts, including notification of the families of these MIAs.

Financial gifts to this cause are shared among Project RECOVER’s three founding entities — the University of Delaware, Scripps Oceanography, and the BentProp Project (a non-profit organization). Funds are being used in the development of technology, data processing, and analysis, and field efforts that lead to discoveries of World War II wreckage and their associated MIAs. All three member organizations recently signed memorandums of understanding with DPAA to formalize their public-private partnership with the U.S. government for conducting MIA related searches. 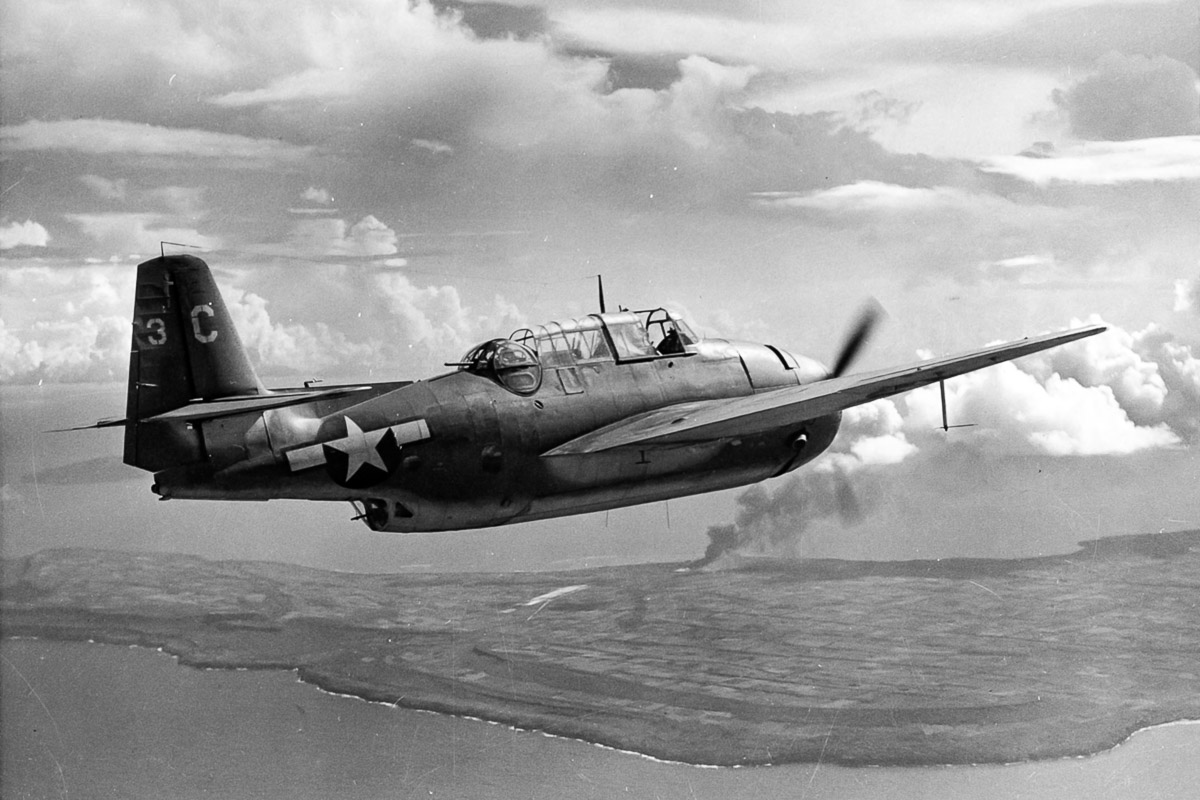 Project RECOVER is a public-private partnership to enlist 21st-century science and technology combined with in-depth archival and historical research in a quest to find the final underwater resting places of Americans missing in action since World War II.

Established in 2012 with initial support from the Office of Naval Research and now private funding, Project RECOVER is a partnership among researchers at the University of Delaware’s College of Earth, Ocean, and Environment, Scripps Institution of Oceanography at the University of California San Diego, and the BentProp Project.

The work blends historical data from many different sources to narrow underwater search regions with scanning sonars, high definition and thermal cameras, advanced diving, and unmanned aerial and underwater robotic technologies. While the bulk of the project to date has focused on searches in the Pacific Islands of Palau, the methods will now be applied to the many regions across the globe where servicemen are still missing.

About the donor, Dan Friedkin

Friedkin is chairman of the Texas Parks and Wildlife Commission and the founder and chairman of the Air Force Heritage Flight Foundation, a non-profit organization established to honor the men and women of the U.S. Air Force through Heritage Flight displays. He also flies right wing for the Horsemen Flight Team. In addition, he oversees the Friedkin Conservation Fund, a charitable organization established by the family working to conserve the habitat and wildlife on more than seven million acres in Tanzania. The Friedkins have also contributed over $100 million to support wildlife conservation and anti-poaching efforts in East Africa.

The BentProp Project, a 501(c)(3) non-profit organization, has been searching for American MIAs for two decades. This team was created by Patrick Scannon and has consisted of dedicated volunteers, who conduct historical and archival research to support annual month-long searches, focusing primarily in the jungles and waters of Palau. The BentProp Project has been successful in locating and identifying numerous MIA crash sites, which has allowed DPAA to conduct recovery and repatriation missions for these missing Americans.

About the University of Delaware’s College of Earth, Ocean, and Environment

University of Delaware’s College of Earth, Ocean, and Environment (CEOE) strives to reach a deeper understanding of the planet and improve stewardship of environmental resources. CEOE faculty and students examine complex information from multiple disciplines with the knowledge that science and society are firmly linked and solutions to environmental challenges can be synonymous with positive economic impact.

CEOE brings the latest advances in technology to bear on both teaching and conducting ocean, earth and atmospheric research. Current focus areas are ecosystem health and society, environmental observing and forecasting, and renewable energy and sustainability.

Scripps Institution of Oceanography at the University of California San Diego, is one of the oldest, largest, and most important centers for global science research and education in the world. Now in its second century of discovery, the scientific scope of the institution has grown to include biological, physical, chemical, geological, geophysical, and atmospheric studies of the earth as a system. Hundreds of research programs covering a wide range of scientific areas are under way today on every continent and in every ocean. The institution has a staff of more than 1,400 and annual expenditures of approximately $195 million from federal, state, and private sources. Scripps operates oceanographic research vessels recognized worldwide for their outstanding capabilities.

The University of California San Diego is a student-centered, research-focused, service-oriented public institution that provides the opportunity for all. Recognized as one of the top 15 research universities worldwide and born of a culture of collaboration, UC San Diego sparks discoveries that advance society, drive economic growth and positively impact the world.  For the sixth consecutive year, UC San Diego has been ranked first in the nation based on research, civic engagement and social mobility.