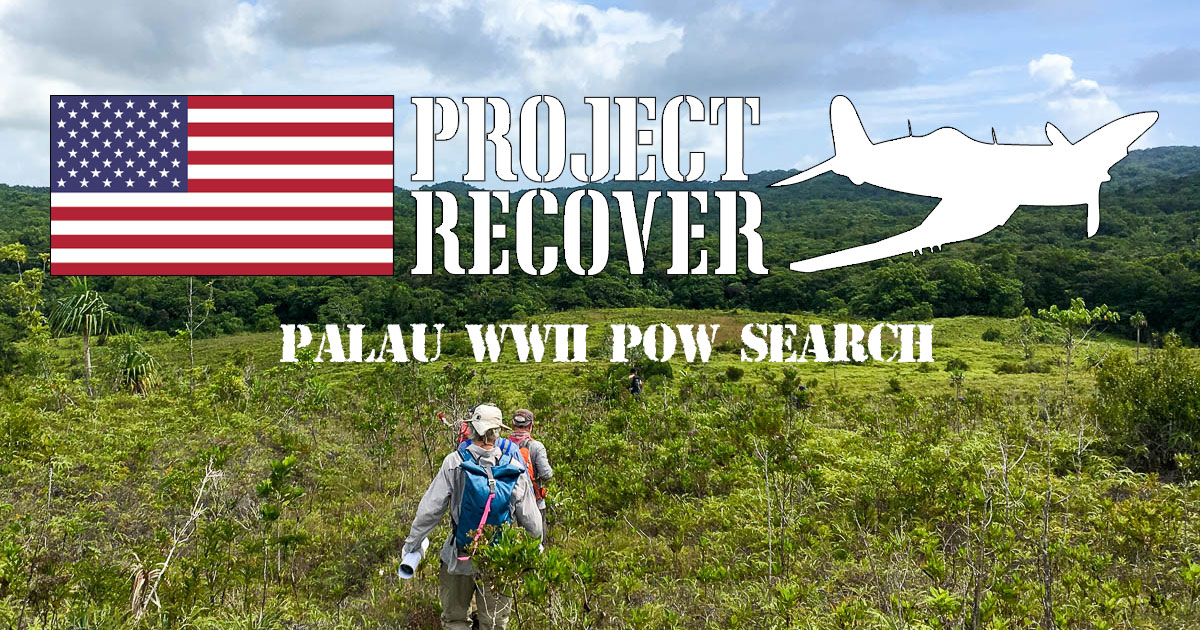 Hi Everybody, Derek here!  It has been too long since any of us has provided an update from one of our missions. Over the last year, we have been so busy with our worldwide expansion and our successful Project Recover partnership. This update is a little late, but we wanted to give you a little insight into one of our recent return trips for a Palau WWII executed POW search.

We recently took a short trip back to Palau to re-engage in some of our efforts in the jungle and a Palau WWII executed POW search. We have spent so much time on the water in recent months, so a few of us were really excited to get muddy again. For those of you that have been following us for years, we again returned to looking for the missing UDT members, downed aviators, and Jesuit priests that we have been in search of for over a decade. Although, we have had a lot of success in recent years, does not in any way mean we have given up on those that we have spent so much time researching and looking for.

On the morning of Thanksgiving, I jumped on a plane in San Diego for Palau. Although I would spend my time eating airplane snacks and airport food for Thanksgiving, I cannot imagine a better way of spending the holiday. I cherish the time I spend with family. However, when I look back at holidays, the ones that I spent on deployments or engaged in something greater than myself with extraordinary people always hold a special place in my heart.

The trip to Palau was the least eventful trip I have ever taken. I didn’t get stuck in any airports, I had an entire row to myself from Hawaii to Guam, and I got to Palau early. I met up with, a longtime member, Jolie Liston in Hawaii. We would be the only two BentProp members in Palau for the first day. We arrived in the evening, checked into our hotel, and called it an evening.

The next day was uneventful. We picked up some supplies and groceries, as well as picked up our phones from our dear friends Pat and Lori from the Coral Reef Research Foundation. Their home and lab burned down a couple of years back and this was our first time seeing their new building.  It was great to see their space and catch up on what was new in Palau.

At the end of the day, I headed to the airport to pick up the rest of the team. Pat and two new members would be rounding out the field team this year.  The new members include Charlie Brown and Glenn Frano. Charlie spent a career in the Army as a helicopter pilot and Golden Knights Skydiver. Glenn is a geospatial specialist and spent a career with Army Corps of Engineers. Glenn has been supporting BentProp for a couple of years now, but this is his first time joining us in the field.

The decision was to hit the ground running the following morning, given that we were only going to be in Palau for a week. Even less for me, as I only had three field days before I had to head back to San Diego for some other requirements.

We got up early and met for breakfast at our hotel lobby in Palau Central Hotel. In the past, we would have breakfast in our own ready room, but we were staying in a different hotel on this trip. We weren’t conducting any water work, so we stayed on the other end of Koror to avoid traffic and to access the jungle quicker. The new hotel is pretty nice by our standards and provided a great breakfast, although not as great as Flip’s pancakes.

We enjoyed breakfast and reviewed what we would be doing over the coming week. The initial goal was to explore three unique areas in the jungle that Pat was curious about after combing through the old documents. Jolie and I reviewed the documents and the report Pat created after a short trip to Palau in June and came up with two additional areas that we were interested in exploring. We had a total of five areas to reach over the next five or six days.  Additionally, we wanted to try to interview a Palauan that is the daughter of an eyewitness that saw a Navy Avenger shot down during WWII. The pilot parachuted from the plane and was captured and executed. Our hope is to find the site where he was buried.

After some administrative errands, we were off to the jungle. We decided to try to explore the spots that Jolie and I were curious in first. We met up with Joe and headed off into the jungle.  We were able to reach the first area very quickly and once we got there we quickly found a large trench. Pat and I spent some time exploring the trench, while the rest of the team explored the surrounding area. They found an old truck in the middle of the jungle, but nothing else significant on our Palau WWII executed POW search.

We headed off to the next area and which was a savannah area on top of a hill. However, we had to get there by moving through the jungle. We made there in decent time and it turned out to be an area of interest. There was evidence of Japanese presence and an area which could potentially lead us to the execution site. Unfortunately, nothing that was concrete evidence. We moved from the open area back into the jungle via an old Japanese road. There were several unique holes that had been dug with several 55-gallon jugs in the area. We continued back to our start point and about the time we made it, we came upon several Japanese tanks that had been buried and left. We still cannot make sense of why they buried the tanks.  There appeared no rhyme or reason as to why they were buried and left.

After a long day in the jungle and fighting jet lag, we headed to dinner at Taj, our favorite Indian restaurant. We enjoyed a great dinner and the time we were finishing, Robert, the owner, told us that some folks wanted to meet up. The group turned out to be a few Navy SEALs that were on vacation in Palau with their significant others.  A couple of them happened to have read and were reading Vanished. We enjoyed some time with them and Pat was more than happy to sign their books. Small world!

The next day it was back to a new area of the jungle. However, we wanted to explore a trench in the vicinity of where the Japanese trench warfare school was located. We wanted to see how it compared to the trench we discovered the previous day. During the war, the trench was in a relatively open area, but the area was now covered in Ito ferns, which we often call Elephant ferns. The ferns don’t look that bad, but once you start moving through them you discover how exhausting it is and how much heat they hold. We found the trench relatively quickly and decided to continue through the ferns into the jungle toward the next area we needed to explore. We were lucky enough to get drenched by a downpour, which kept us relatively cool and prevented us from overheating. We made our way to the next area and back to our vehicle before the end of the day.

The next day was my last day in the jungle. My flight was leaving the following morning at 3:15 AM.  We only had one more location to explore of the five we had on day one.  Of course, after looking through our materials some more, we found another area we wanted to look at. This one was on top of a hill that is usually covered in Ito ferns, but they had been cleared by a brush fire. Additionally, it would require multiple river crossings.

So off we went! We made our way to the river and Joe found a large log for us to cross over on.  We all made it over without any issue, some scooting on their rears and others braving the walk across the log. We made it through the jungle and started up the hill through the ferns. We made it most of the way to the top before we stopped for a break. We found a little shade under a couple of bushes before we continued to the top. We didn’t find anything significant at the top except for a great view of the surrounding area.

We decided to move toward the last area of interest to see if we could make it before the end of the day. Before we stepped off though, we took the time to deliver BentProp coins to our newest members. It was slow moving through the jungle. It was thick but we kept on finding holes dug by the Japanese. We were about to the area when we found a large pile of debris left by the Japanese. It included several saline bottles and metal cans. The most interesting discovery was a Japanese enamel bowl in great condition. The unusual thing about it was that it was a Japanese Navy bowl in the middle of the jungle. We have seen several of these in Peleliu, but not in this jungle. We did not get to explore the last area, as we ran out of time.  However, we covered a lot of land.

I got to pick dinner since it was my last day. I can never get enough of Taj, so we headed back.  I was off to the airport for my flight home a few hours later. Although we did not have any big discoveries during my time on this mission, I wouldn’t trade it for anything. More work to be done!

Until next time,
Derek

Read other posts about Project Recover’s Missions to Palau:

Read posts about Project Recover’s 2018 Mission to the Solomon Islands: 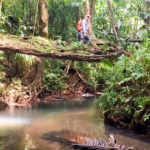 Pat Scannon trekking through the jungles of Palau 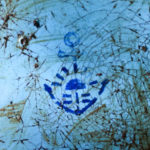 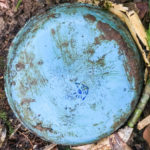 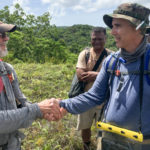 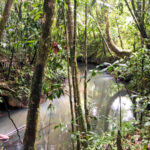 The deeps jungles of Palau 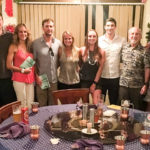 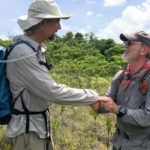 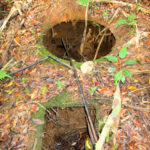 Buried Tanks found during the expedition. 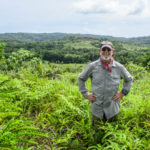 Team leader Pat Scanon in the Jungles of Palau