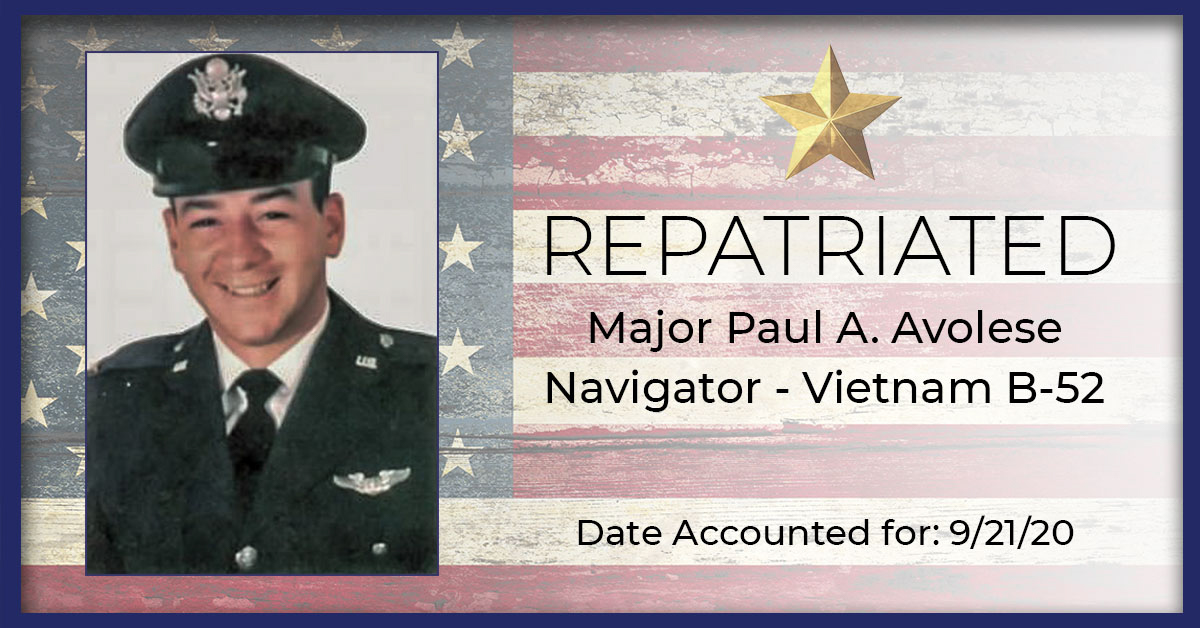 MAJ Paul A. Avolese was accounted for by the Defense POW/MIA Accounting Agency. Project Recover located his downed B-52 in 2020 and is honored to play a vital role in his repatriation.

Project Recover humbly acknowledges MAJ Avolese’s service and sacrifice, as well as the enduring loss to his family. We are grateful and honored to play a vital role in bringing him home. The repatriation of Major Avolese and our MIAs helps resolve generational grief and awaken us to gratitude, hope, love, and unity. This is the legacy of our MIAs and their final mission.

MAJ Paul A. Avolese, 35, was a B-52 radar navigator during Vietnam.  He served in the USAF from 1952 until his death in 1967. Major Avolese was in the Air Force under Strategic Air Command, 4133d Bomb Wing (Provisional), 2d Bomb Squadron.

On July 7, 1967, MAJ Avolese was part of a 7-member crew aboard a B-52D Stratofortress, tail number 56-627, call sign “Kilo Red 2.’ They and two other B-52s took off from Andersen Air Force Base, Guam. The aircraft was on a bombing mission against enemy targets east of Bien Hoa, South Vietnam.

Search and rescue efforts at the time located four survivors from Kilo Red 2. However, they were unable to locate three members of the Kilo Red 2 crew. MAJ Paul A. Avolese was among the missing. He was declared Missing in Action on July 7, 1967, and Killed in Action on July 24, 1967. He was survived by his beloved family; his wife and four children.

In 2020, Project Recover represented by Scripps Institution of Oceanography, along with members of the Defense POW/MIA Accounting Agency and the Vietnamese Office searched for the MIAs. They used a fleet of REMUS 100 autonomous underwater vehicles (AUVs) equipped with side-scan sonar and magnetometer to survey approximately eight square miles of the seafloor.

The team discovered, and in coordination with DPAA, recovered the remains of MAJ Avolese at one of these sites. The DPAA accounted for MAJ Paul A. Avolese on September 21,  2020.

MAJ Paul A. Avolese was buried beside his wife in Oregon in July 2021.