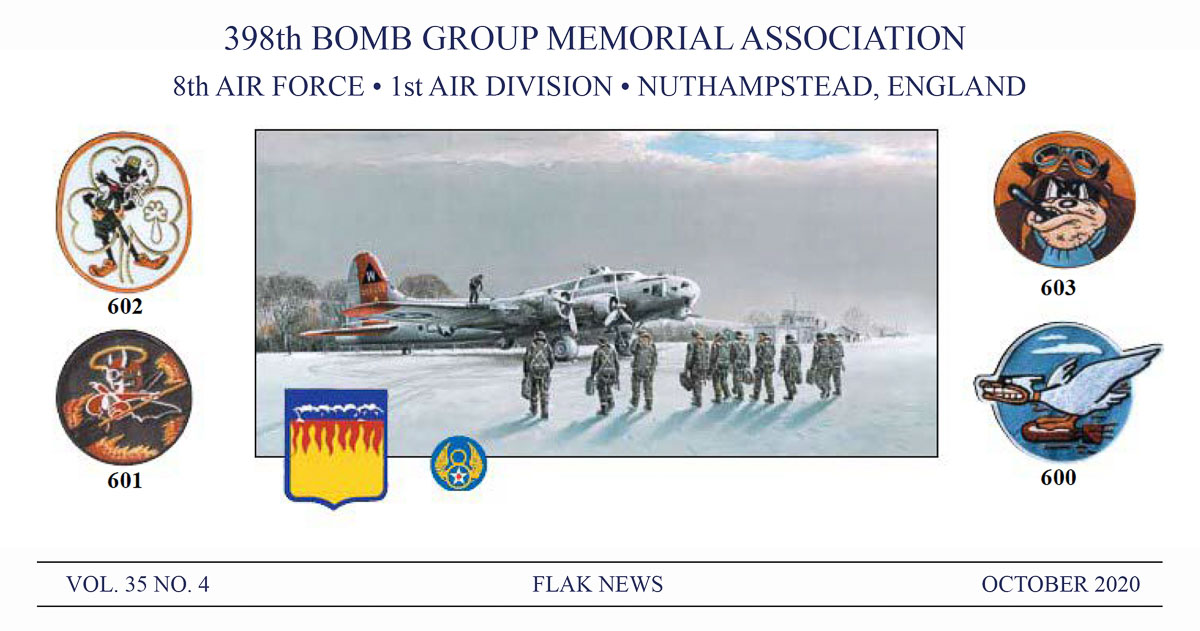 Dr. Colin Colbourn, Project Recover historian, was featured in Flak News, the 398th Bomb Group Association’s news magazine, in October 2020. The article, Dr. Colin Colbourn and Project Recover” by Melissa Ledlow, begin with the story of Dr. Colbourn’s great uncle, 1st Lt. Charles “Buddy” E. Howell. Lt. Charles Howell was the pilot of a B-17 in the European theater. He and six members of his crew were killed in action in a bombing mission over Germany.

On November 21, 1944, Lt. Charles Howell took off with nine crew members on a mission to bomb Leuna Oil Refineries at Merseburg, Germany. German fighters attacked and their B-17, the ‘Fuddy Duddy,’ was badly damaged. Lt. Howell and his co-pilot, 2nd Lt. William Bryan, were able to hold the plane steady long enough for three crew members to parachute. The remaining crew members went down with the plane and were killed in action. The men who survived the crash were captured by enemy forces and made prisoners of war.

Colin earned his MA in War and Society and Ph.D. in History at the University of Southern Mississippi. Early in his career, he started a Historical Fellowship at the Defense POW/MIA Accounting Agency. Once introduced to the potency of using historical research to bring MIAs home and closure for the families, Colin was decided.

“Finding MIAs is something that, once you do it, it’s hard to get it out of your system. Everything else seems a little less meaningful,”

Colin’s work with MIAs at DPAA was a profound introduction to conducting applied research and “having an impact on families’ lives, and even, in some way, on someone who died.’ The meaningful nature of the work stuck with him and eventually led him to Project Recover.

Colin Colbourn, Ph.D., is Project Recover’s Lead Historian and a Postdoctoral Researcher with the University of Delaware. Since 2016, he has managed historical operations including archival research, data management, case analysis, and field investigations.

“I pour everything I‘ve got into solving mysteries for MIA families.”

As a historian, Colin helped developed a database which now has over 500 cases entered, representing nearly 2,500 MIAs, he has helped bring some answers to his own family’s MIA, Lt. Charles Howell. Beyond that, he has helped bring answers to the families of other crew members on or somehow affiliated with his great uncle’s final mission.