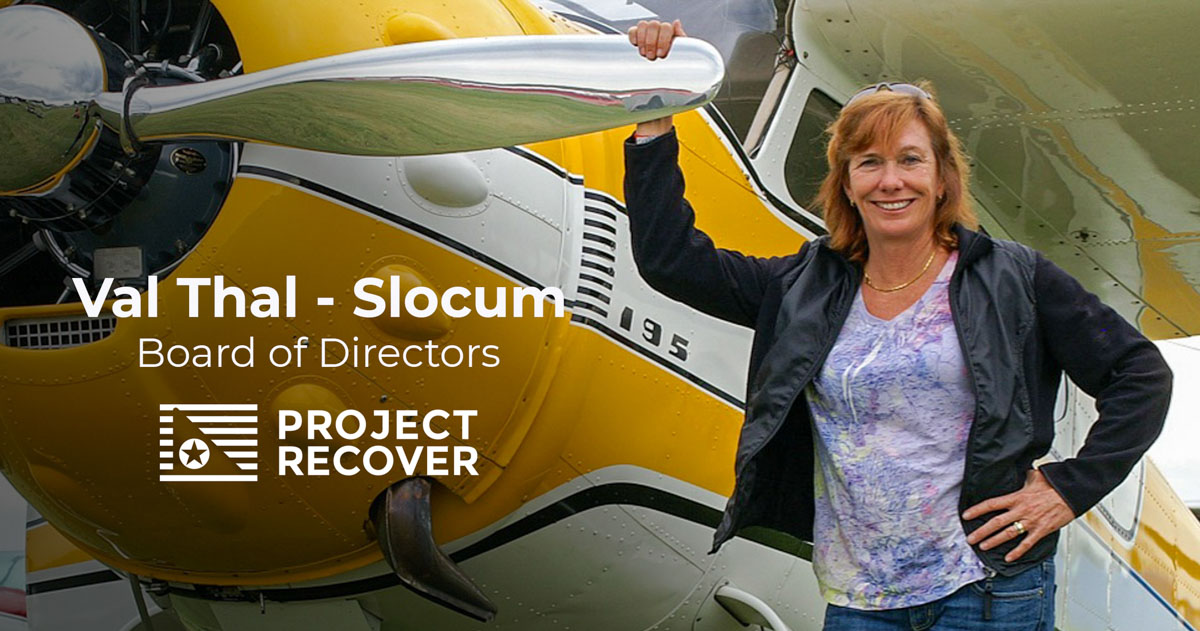 Val Thal-Slocum has been a member of Project Recover since 2002 and on the Board of Directors since 2004. She is a retired FedEx Pilot, a skydiver with more than 6,000 jumps, and an advanced open water SCUBA diver.

“I enjoy adventure being in the jungle and oceans of a foreign land, but the very best part is being able to be with the families when their loved ones come home. More than closure, it is the family’s joy and thankfulness at having their loved one home that is priceless to me.”

Val was intrigued by the adventure and the mission. She let Dan know that she was interested in helping out. A few months later, Val got the word. The team was in need of someone who didn’t mind getting “dirt under their fingernails, knew something about old airplanes,” and was willing to help with the new documentary in process.

Was Val still interested? Val was interested, and she fit the description perfectly. Val loved nature and playing in the dirt since she was a little girl. She and her husband had restored a Cessna 195 and Beech 18, both vintage 1950’s era aircraft.

As an amateur photographer, Val was usually on the side of the camera with the viewfinder. However, she was willing to do whatever was needed to help out on the mission. She went on her first mission to Palau in 2002.

Val Thal-Slocum served as the Team Navigator on her first mission to Palau in 2002. The mission was a doozy, filled with emotional moments. The team conducted a flag ceremony, located a Corsair, and held a memorial.

One year before Val joined, the team located a TBM Avenger crash site. The pilot was Major Harry Scullins. He and the two crew died in the crash on November 10, 1944. Since that time, Pat Scannon was in contact with Major Scullins’ two surviving sisters of the pilot. They had always wondered what happened to their brother. The team performed a flag ceremony with two flags at the crash site to give a flag to each sister.

Val’s first mission also happened to coincide with the 57th anniversary of Major Quintus B. Nelson’s death in WWII. Nelson’s Corsair was shot down on April 16th, 1945. Major Nelson’s son had reached out to Pat some years earlier about his father’s aircraft. The team had searched, but not yet found the aircraft. Jim and Neel Nelson joined the team in Palau.

This memorial was the first held for Major Quintus B. Nelson. Mrs. Nelson always believed he would come home. What started small turned into an elegant memorial to a man who served his country to the fullest measure. Pat told Major Nelson’s story. Val read One More Roll, a poem by Commander Jerry Coffee. There was a letter from the US Embassy in Palau and another from the Commandant of the Marine Corps. One flag was folded for Jim Nelson and another for his mother back home.

“Jim had been given a lei to wear at the beginning of the ceremony and Dan O’Brien asked him in the island tradition to toss it on the waters. Words were said by all and everyone was teary-eyed.” (~Flip Colmer, 2002)

An attachment of the Marine Attack Squadron, VMFA 225, was in Palau. Later they did a flyover in honor of Major Nelson. In 2019, one of Major Quintus B. Nelson’s squadron mates many generations later, Derek Abbey, would become Project Recover President and CEO.

The team located the crash site of an F4U-1D during Val’s first mission to Palau as well. The Corsair, flown by 2nd Lt. James Misley, was shot down on March 10, 1945. The debris field was found in the jungle and spread over 50 yards. The team located some cockpit pieces, landing pieces, and the tailhook. They did not locate any personal effects, machine guns, wings, canopy, or tires. 2nd Lt. Misley’s remains were recovered in 1947 and buried in San Francisco, California, in 1949. Some of Misley’s squadron mates and his wingman never knew what happened. Pat wanted to tell them.

Val: After the Mission

Val enjoyed every minute of her first mission. She loved meeting new people, interviewing elders, thinking outside the box, and exploring the beautiful waters and jungles of Palau.

She knew she wanted to be a part of the mission to bring our heroes home and complete the history of our service members in World War II.

She also learned that what happened in Palau did not stay in Palau. The mission and adventures spill over into stateside introductions, celebrations, and flag deliveries. After her first mission, Val joined Pat Scannon and Dan O’Brien to deliver the ceremonial flags flown over the Avenger crash site to Major Harry Scullins’ two surviving sisters in St. Louis, Missouri. Pat and Dan separately contacted 2nd Lt. James Minsley’s wingman. The three of them delivered a ceremonial flag to his surviving sister in the San Francisco Bay area. One year later, she would travel with the team to Jim Nelson’s home to celebrate the finding of Major Nelson’s aircraft — and meet President George H. W. Bush.

Being involved in all aspects of aviation has been a lifelong passion for Val. She decided she wanted to be a pilot when she was 16 years old. Her dad just earned his pilot’s license. He took the family on a flying trip up the West coast. Val figured if he could do it, she could, too.

Her parents were willing to accommodate. In her senior year of high school, her parents gave her a combined graduation, Christmas, and birthday present: flying lessons. She was on her way to getting a private pilot’s license.

By the time Val started with Flying Tigers in 1987, it was an international airfreight line. When FedEx bought Flying Tigers in 1988, Val stayed on. She started as a flight engineer. Val worked her way to co-pilot and finally to Captain and Pilot in Command. Throughout her career, she flew 747’s, DC-8’s, 727’s around the world. When Val retired after 30 years of service, she was flying as an MD11 Captain.

Val is proud to be a part of paving the way for women in aviation. She stops short of calling herself a pioneer and reserves the word ‘pioneer’ for Women Airforce Service Pilots (WASPS). Regarding Gertrude Tompkins (Silver), a WASP and the only missing female pilot from WWII, Val says she was a true pioneer and ‘made it possible for me to do what I do.”

Project Recover conducted a search for her aircraft in 2016.

“Finding Gert, the only missing WASP would be a wonderful tribute,” Val said.

Val is a member of the International Society of Women Airline Pilots (ISA+21) and Ladies Love Tail Draggers.

In addition to flying airplanes, Val is passionate about skydiving. She made her first jump the same year she got her private pilot’s license. Val holds or has held records in the USA, France, Belgium, Italy, Poland, and Thailand in large formation skydiving. Val was a part of Jump for a Cause which raised almost a million dollars for breast cancer research in 2009.

Officially, Val lives in Belize with her husband, Jim. COVID-19, however, inadvertently interfered with their travel plans in March. Since then they have been building an aviator cabin in their Illinois hangar.

Val is a proud mother and grandmother. In her remaining time, she enjoys being crew for her husband during his glider competitions. And thinking about her next adventure.