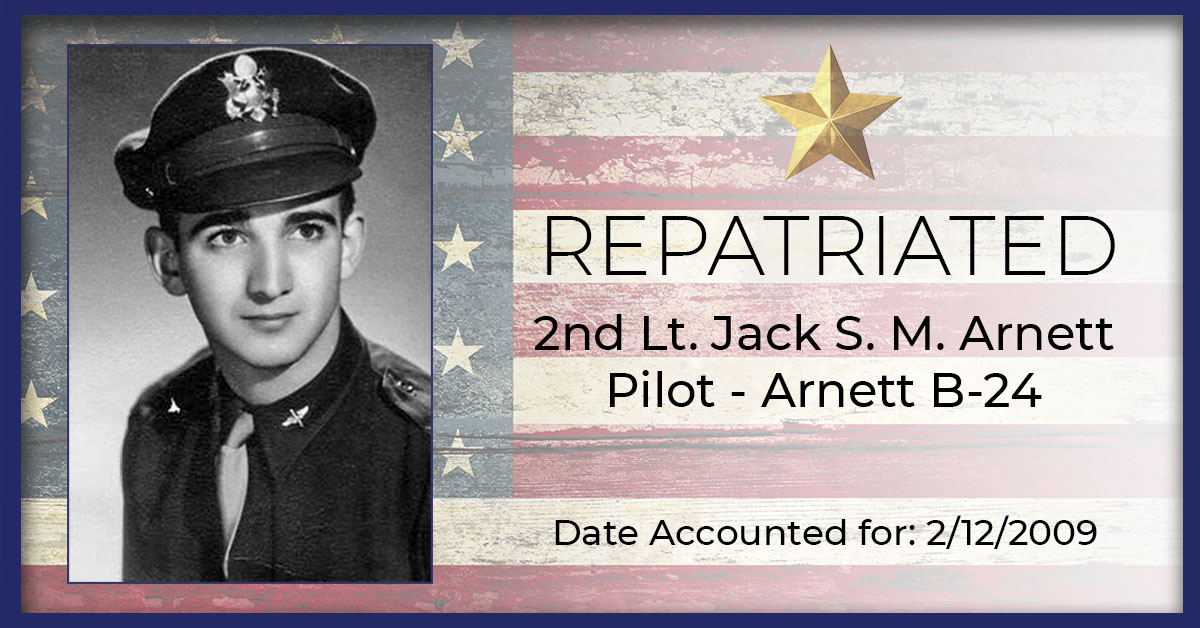 2nd Lt. Jack S. M. Arnett was accounted for by the Defense POW/MIA Accounting Agency. Project Recover located his downed B-24 in January 2004 and is honored to play a vital role in his repatriation.

Project Recover humbly acknowledges 2nd Lt. Arnett’s service and sacrifice, as well as the enduring loss to his family. We are grateful and honored to play a vital role in bringing him home. The repatriation of 2nd Lt. Arnett helps resolve generational grief and awaken us to gratitude, hope, love, and unity. This is the legacy of our MIAs and their final mission.

2nd Lt. Jack S. M. Arnett, 24, was the pilot on a B-24 with the tail number ending in ‘453. He was not the regular pilot of the aircraft but stood in for the mission on September 1, 1944. The aircraft was shot down on its bombing mission over Palau.

Project Recover located the aircraft on January 26,  2004, after a 10-year search. Eight crew perished with the aircraft. The Defense POW/MIA Accounting Agency (DPAA) repatriated eight MIAs in 2008.  2nd Lt. Jack S. M. Arnett was among them.

“I think it is the uncertainty that is so hard, and alternating between hope and despair.” Dessie Arnett, Jack’s mother, wrote to the mother of SSgt. Jimmie Doyle about one year after the crash.

Jack’s cousin, Carolyn,  remembered him as “quiet, but brilliant,” prone to challenging his instructors in school, and he was “usually right.”

2nd Lt. Jack S. M.  Arnett’s remains were cremated. He was interred in Arlington National Cemetery. His ashes were also buried in Orlando, FL, next to his brothers as well as in his hometown, Friendly, WV. One of his brothers had promised his mother he would bring Jack home.

“Jack grew up in West Virginia, and in a small cemetery on a hill overlooking the tiny Ohio-River village of Friendly, West Virginia, there are three headstones: those of Jack’s father and mother, and one for Jack that was placed there in 1946, long before either of his parents passed away.” (Pat Scannon)

Three crew members were not recovered from the B-24. They parachuted from the aircraft, were captured, and then executed by enemy forces. They remain MIA.
The plane is featured in a painting by Mark Pestana, entitled Mission: Palau. The story of the search and recovery was featured in the book, Vanished: The Sixty-Year Search for the Missing Men of World War II by Wil S. Hylton.