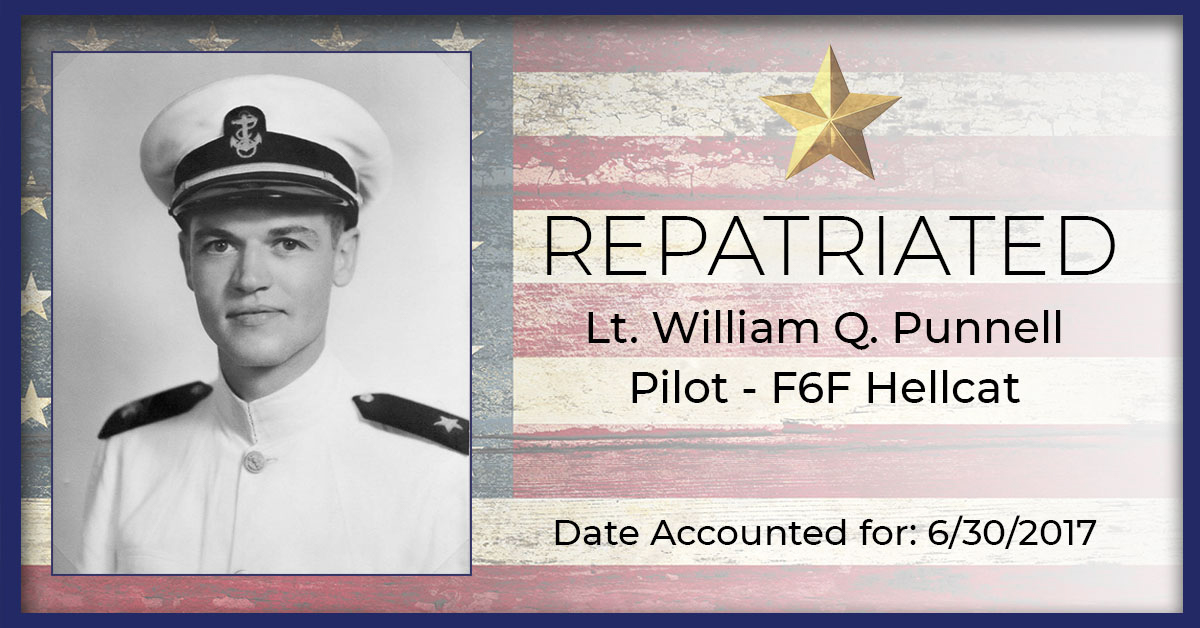 Lt. William Q. Punnell, 27, was accounted for by the Defense POW/MIA Accounting Agency. Project Recover located his downed F6F Hellcat in March 2014 and is honored to play a vital role in his repatriation.

Project Recover humbly acknowledges Lt. Punnell’s service and sacrifice, as well as the enduring loss to his family. We are grateful and honored to play a vital role in bringing him home. The repatriation of Lt. Punnell helps resolve generational grief and awaken us to gratitude, hope, love, and unity. This is the legacy of our MIAs and their final mission.

Lt. William Q. Punnell, 27, was the pilot of an F6F Hellcat and acting commanding officer of the VF-14 Fighter Squadron.

On July 25, 1944, his aircraft launched from the USS Wasp on a strafing mission against Japanese targets on Palau. His aircraft was in the lead and encountered intense anti-aircraft fire over Palau. The tail of his aircraft took a direct hit and his aircraft crashed 300’ from the northern seaplane base.

Lt. Punnell left behind a wife, Mrs. Marian Claire Punnell, and a son who was born four months after his plane was shot down.

Working in partnership with Scripps Institution of Oceanography and the University of Delaware, College of Earth, Ocean, and Environment,  Project Recover located the F6F Hellcat in March 2014.

“It was never even thought that someone would find him. It was never considered,” said Dennis Kelvie who was 2 weeks old when his uncle was declared MIA. “The ocean is a big place.”

Lt. Punnell’s funeral was attended by his nephew as well as his great-nephew and namesake. Dennis said that his uncle was the “hero of the household” and named his first son after the uncle he’d never met.

“It felt like something magical was happening,” said Dennis Kelvie describing how he felt when his uncle, Lt. William Punnell, was buried at  Arlington National Cemetery after 74 years MIA.

Lt Punnnell’s son and wife had already passed away in years prior to Punnell’s repatriation.