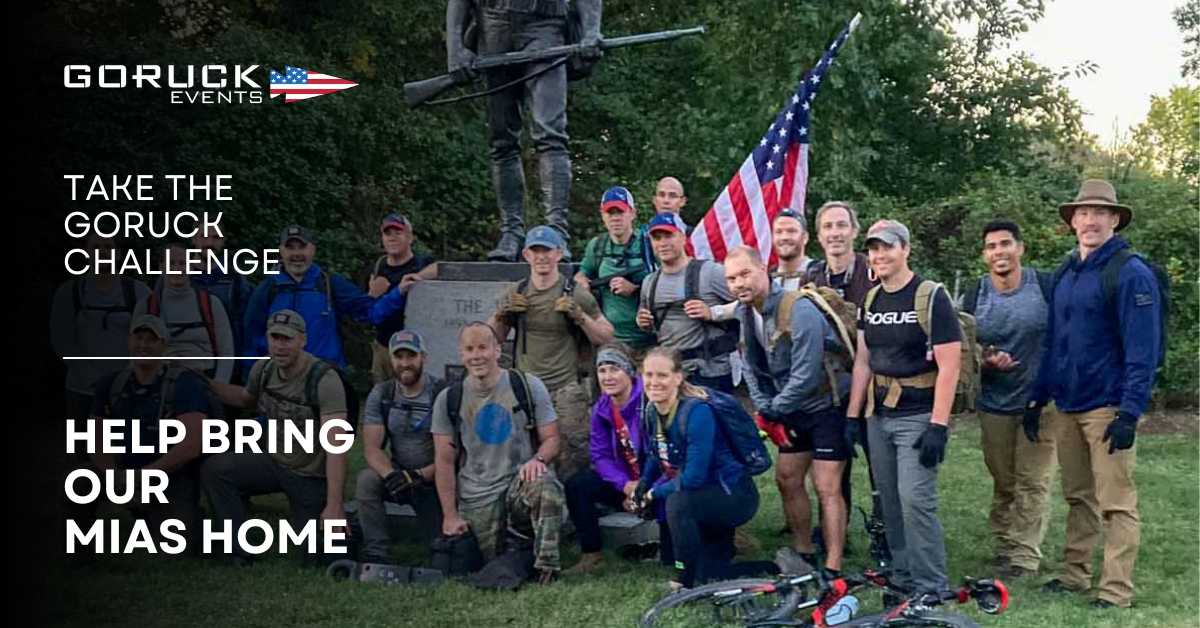 We fully embrace the mission of Project Recover to ensure we “leave no one behind.” We have known men and women who served in Iraq, Afghanistan, and other countries. Some of those gave their last full measure of devotion to our country. Too many people were left in foreign lands; and, it’s important to us to bring them home.

NCR-SQD is a private group that takes on an annual  GoRuck Challenge to raise money for a veteran-oriented charity. Brian Worth is the group’s leader. A lobbyist by day, he looks forward to these annual events to push himself and, more importantly, raise money for a good cause. In the last eight years, they’ve raised more than $300k for small to mid-sized organizations.

“Raising money for veteran-related charities is the most important part of this event for us,” Brian said. “It’s our purpose and bigger than any one of us.”

After watching To What Remains, the movie about Project Recover and bringing MIAs home,  the team selected Project Recover to benefit from their GoRuck Challenge fundraising.

“NCR-SQD’s model of teamwork and persisting with grit and determination for the greatest good mirrors our values – and those of our MIAs,” said Derek Abbey, Project Recover President & CEO. “We are honored they have chosen Project Recover as their nonprofit to support this year.

Though the  NCR-SQD team varies, they have a stable core. This year, they faced the Challenge with 17 men and three women in their squad.

After months of training and fundraising, the NCR-SQD team gathered to face down the 12-hour GoRuck Challenge on Roosevelt Island in Washington, D.C.

The GoRuck Cadre who led NCR-SQD’s event was a former Air Force CCT special forces operator. He wore a mustache and a fedora aligning with their historical theme: Teddy Roosevelt & the Rough Riders, but he was all business.

The team covered 20 miles that night, carrying 30-pound GoRuck Rucksacks, three 60-pound sandbags, and one bicycle. They’d brought food, but – also in keeping with Teddy Roosevelt’s Rough Riders, who fought two days without food – were not allowed to eat it.

Instead, they were obliged to carry their food and only snack on saltines.

Through the night and the tasks, 20 individuals had the job of becoming a team. They learned to keep their pride in check. The hard-chargers learned to give space and pace themselves. As a whole, they strove to keep every person engaged and contributing through inevitable exhaustion.

“I have never been in the military, but I imagine this is a small snapshot of what people who have served in the military miss when they get out. There is a sense of camaraderie and teamwork when people from different backgrounds and abilities get together to accomplish a complex task that is bigger than any one of us by ourselves. We bond more deeply, better appreciate each other, and have a healthy dose of a different perspective.” (Brian Worth)

“It is great to push yourself, and your life should be about something bigger than yourself,” Jason McCarthy, founder of GoRuck told Brian Worth and the NCR-SQD at their first Challenge.

This sentiment is at the heart of the NCR-SQD’s motivation to raise $34k to benefit Project Recover.

You and your corporate team or friends and family can organize a GoRuck Challenge to bring MIAs home, too.

It is straightforward and builds your team and your character!

Then you are ready for the event of a lifetime.

Leave your comments here if you and your corporate team are going to take the GoRuck Challenge. We’d love to follow and share your progress!