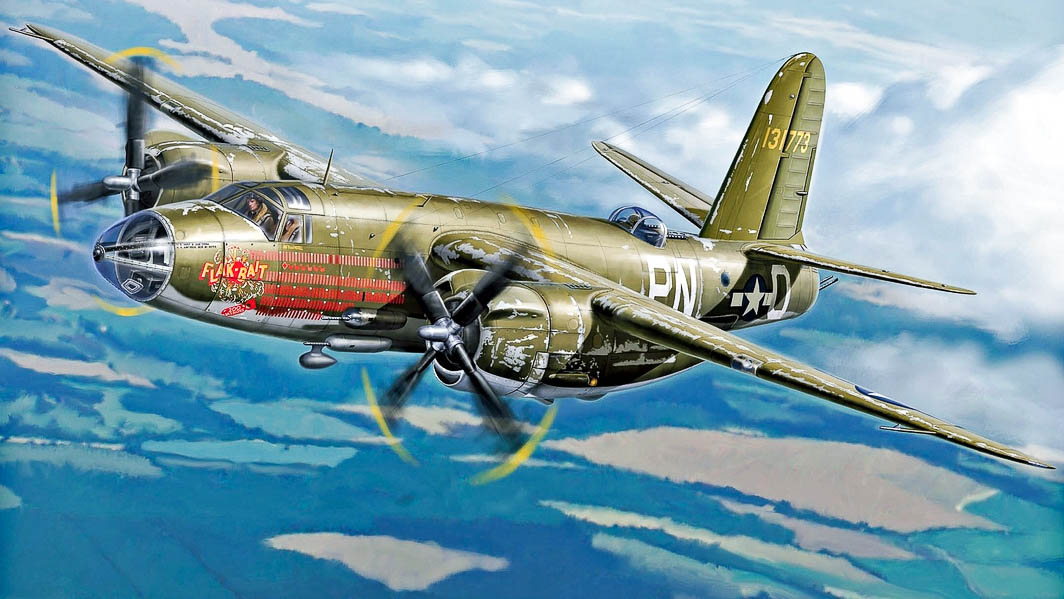 May 11th, Washington, DC: Project Recover team members Pat Scannon, Colin Colbourn, Megan Lickliter-Mundon, Nolan Brandon, and Daniel O’Brien traveled to the National Air & Space Museum at Dulles Airport for a rare peek into the world of preservation while gathering evidence on a current Project Recover mission involving a B-26 bomber, with MIAs (Missing in Action) still associated with it.

The Project Recover team is currently investigating a rare type of B-26 bomber that is scattered across the ocean bottom, 70+ feet deep, in a remote part of the ocean. The only way to properly identify the suspect aircraft is to compare it to a known accessible aircraft. As one can imagine, after a wreck and compounding years in the ocean, identifying a found aircraft can be a difficult puzzle at best.

Currently, The National Air and Space Museum B-26 Bomber is one of the most well-known B-26’s from World War II, “Flak-Bait” and once the team learned this, they flew out to compare parts and pieces from their current mission. The hope is to match parts and correctly identify the located missing aircraft.

“We had a great visit with the Air and Space Museum B-26 Bomber “Flak-Bait” and its curator at U-H NASM. The plane was in three pieces in the process of disassembly and reassembly for floor display, a five-year mission of restoration. Wings and engines were separate with numerous smaller parts (e.g., turret, radio gear). On a recent expedition Project Recover located part of the dorsal turret frame which means we finally found part of the rear fuselage. We also found one of the co-pilot’s rudder pedals and correlated aircraft pieces that we had thought we had gotten right. It was truly an amazing experience: the curator agreed what we are doing is important and stopped what he was doing to help us. Megan did a great job arranging this and Nolan, Colin, Dan and I took many photographs. This will help greatly in writing the Site Survey Form (which will assist DPAA with the next steps towards a recovery of the MIA crew) and help with any other B-26 crash sites we find. It remains a complex crash.” said Pat Scannon, the Founder and President of The BentProp Project.

The B-26 nicknamed “Flak-Bait” survived 207 operational missions over Europe, more than any other American aircraft during World War II. Workers at the Baltimore factory completed “Flak-Bait” in April 1943 and a crew flew it to England. Lt. James J. Farrell of Greenwich, Connecticut, flew more missions in “Flak-Bait” than any other pilot. He named the bomber after “Flea Bait,” his brother’s nickname for the family dog.

A big thank you to Pat Robinson Museum Specialist, Preservation and Restoration Unit and his team at the National Air and Space Museum/ Smithsonian Institution.

To keep up with the BentProp Project and Team Project Recover, please sign up for our newsletter below.

Make sure to Check out Project Recover’s Facebook Page for all the latest news and updates.

Project Recover is the official title of the collaborative efforts of The BentProp Project, University of Delaware’s College of Earth, Ocean and Environment, and Scripps Institution of Oceanography.  Since 2012, these groups have partnered with their valuable skills and capabilities with the intention of locating America’s Missing in Action.