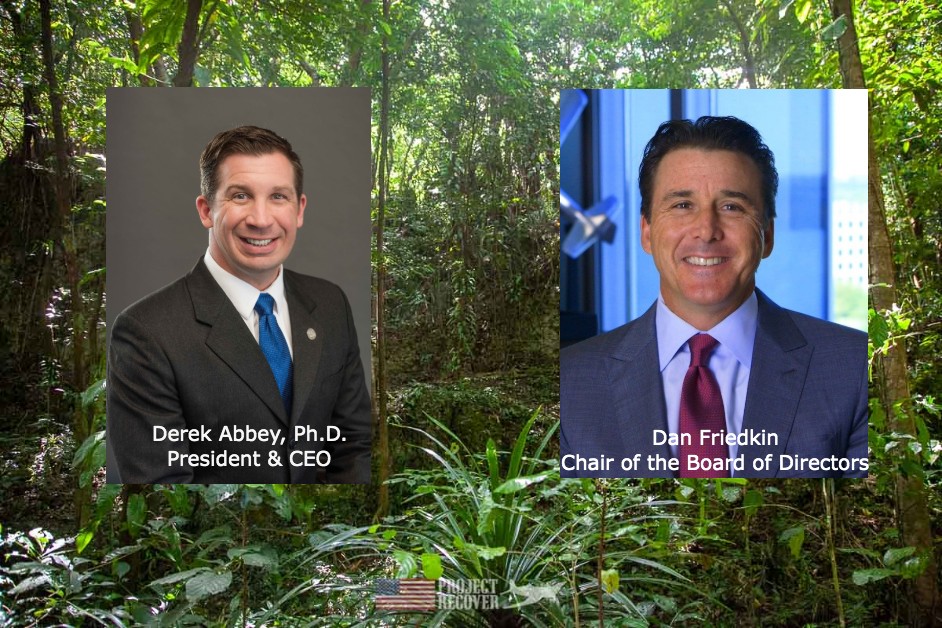 The Project Recover Board met on Tuesday, Aug. 20, 2019  – less than an hour after we learned of the tragic accident and death of our fellow board member and dear friend, Flip Colmer. It was a tough and sad meeting but we decided that Flip would have wanted us to proceed.

Of the various business matters we dealt with (this was our Annual Meeting), two key votes were taken and unanimously approved:

1) Dan Friedkin was formally voted in as Chairperson (Dan abstained).

All of us in Project Recover are excited and honored that Dan has joined our 501c3 Board of Directors. Current members include Dan Friedkin, Derek Abbey (President/CEO), Val Thal (Secretary), Dan O’Brien (Treasurer) and Pat Scannon. Dan has supported Project Recover for several years now and we are so pleased he has agreed to play this active role with us.

From his very first involvement with Project Recover, Dan stressed the need for a formalized donor strategy for sustaining our vision and mission. To be done the right way, we felt this would require oversight and execution from an appointed employee of Project Recover. In thinking about who might take on this important role, in addition to continuing Project Recover’s operations and missions, we considered a number of people. But Derek Abbey quickly came to the top of our list because of the breadth of his relevant leadership and expertise, as well as his deep knowledge, understanding, and enthusiasm for our mission.

In spite of the sadness in the background of our board meeting on Aug. 20, it was our honor and pleasure to nominate Derek and to see him unanimously voted into this role as President and CEO of the Project Recover 501c3. Derek’s start date is Sept. 1 as a full-time employee.

We want to assure each team member that after 26 years of leading and growing this organization, Pat Scannon is not going anywhere. He has committed to helping support Derek in his new role and the ensuing donor campaign. He will continue as a member of the PR board and looks forward to working with our new Chair. He is also committed to continuing to conduct field missions (the role he most enjoys).

Please join us in welcoming both Dan and Derek into their new roles within Project Recover!

A Message From Derek:

It has been my honor to be a part of this organization for the last 15 years and I am excited and humbled to step into these new roles. The legacy that Pat and the team, as well as our partners, have created includes a successful track record and trajectory of continued progress that we will maintain. We have accomplished an enormous amount in the last few years. These accomplishments include things that we weren’t quite capable of foreseeing even five years ago. I believe that there are additional goals to attain in the coming years that we have yet to consider. However, I know that when these challenges appear, your innovation and resolve will create tangible and impactful solutions.

Incredible successes are possible when there is a strong foundation to work from. Ours was firmly established from the initial creation of the BentProp Project and has continued to grow since then. The mortar that holds this foundation together is our mission, vision, and values. The bricks are you, our members, and your unwavering commitment to our important cause. Each and all of you make Project Recover special. It is my privilege to be a part of this elite team and the immeasurable impact we are having on individuals, families, and the Nation.

I know that all of you believe strongly in and care about our mission and are exploring how you can best impact and grow our success. I thank you for your commitment and I look forward to working alongside each of you as we move forward.