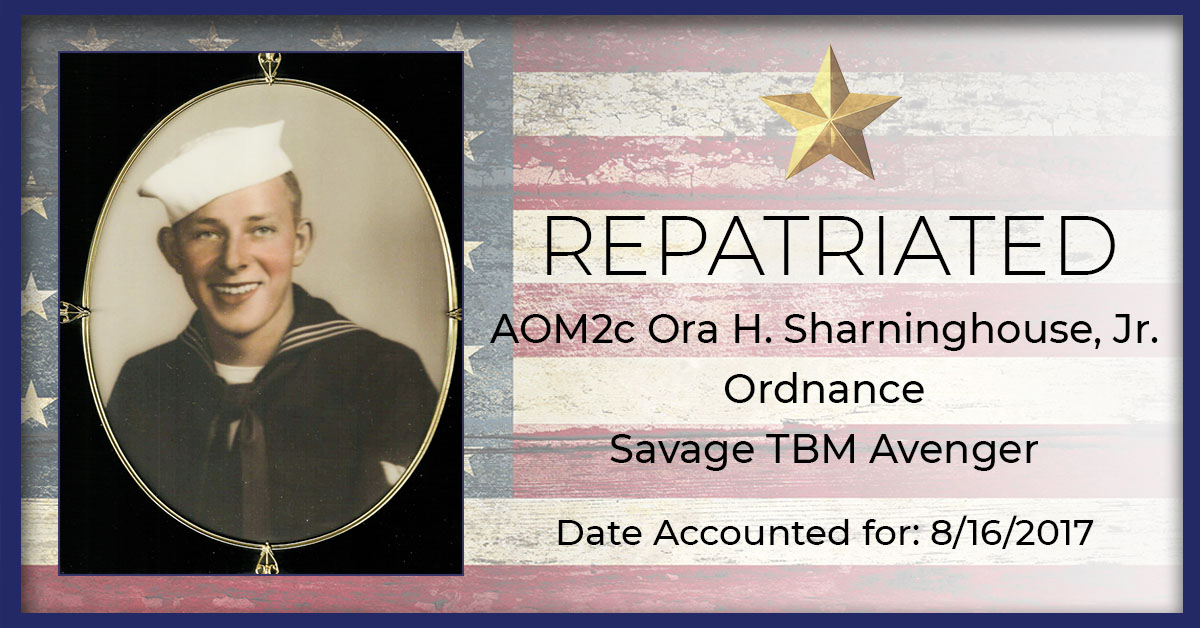 AOM2c Ora H. Sharninghouse, Jr, 21, was accounted for today by the Defense POW/MIA Accounting Agency. Project Recover located his downed TBM Avenger in March 2014 and is honored to play a vital role in his repatriation.

Project Recover humbly acknowledges AOM2c Sharninghouse’s service and sacrifice, as well as the enduring loss to his family. We are grateful and honored to play a vital role in bringing him home. The repatriation of AOM2c Sharninghouse helps resolve generational grief and awaken us to gratitude, hope, love, and unity. This is the legacy of our MIAs and their final mission.

AOM2c Ora H. Sharninghouse, Jr, 21, was the ordnanceman on a TBM Avenger piloted by LT(JG) John J. Savage. He was a member of Navy Torpedo Squadron Eighteen (VT-18) based on the USS Intrepid.

On September 8th, 1944, the crew took off on a mission to soften enemy positions by dropping munitions on an ammunition dump. The Avengers glided lower and dropped their load at 1,000 feet. The resulting explosion caused catastrophic damage to their aircraft and it crashed offshore.

An eyewitness told Pat Scannon he saw one person parachute out of the plane. He saw the person captured by enemy forces and executed.

The Avenger was in 100 feet of water. The wreckage was spread across 40 meters in two locations suggesting the plane was tumbling when it crashed.  An unofficial flag ceremony was held over the crash site in honor of the three affiliated MIAs.

The Defense POW/MIA Accounting Agency conducted a recovery mission. They accounted for two MIAs from the TBM Avenger. AOM2c Sharninghouse was one of them. Project Recover was honored to attend his funeral in April 2018 in his hometown of Findlay, OH.

Joan Stough recalled that her brother, Ora, nicknamed Junior, was kind and had a close relationship with his mother. He would hug her often, gently tease her, and always kiss her goodbye when he left.

Of the four Sharninghouse boys who served in WWII, Junior wrote home most frequently, according to Stough. When his mother didn’t hear from him, she worried that something had gone terribly wrong.

AOM2c Sharninghouse had seven siblings and would have been an uncle many times over. Fifteen of 16 nieces and nephews traveled from around the country to pay tribute to the uncle they’d heard about but never met. Like other repatriated MIAs, hundreds celebrated a hero’s homecoming.

The families of ARM2c Rybarczyk and AOM2c Sharninghouse each attended the funeral of the other.