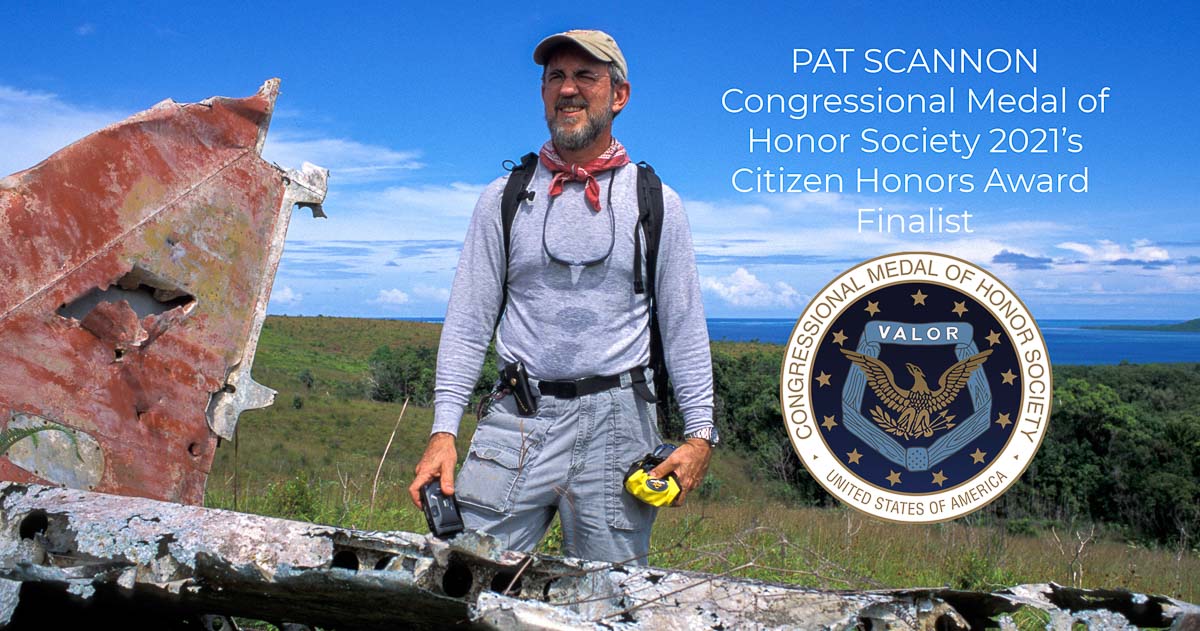 Pat, the founder of the BentProp Project and co-founder of Project Recover, has been chosen for his nearly three decades of extraordinary volunteer service to find American MIAs and bring them home.

Pat was nominated for nearly three decades of extraordinary volunteer service to find American MIAs and bring them home.

On March 25, 2021, the Congressional Medal of Honor Society announced that Aidan Reilly and James Kanoff are the 2021 Citizen Honors Service Act Awardees.

Reilly and Kanof created FarmLink Project; an effort connecting farmers with a surplus product to communities in need during the pandemic.

“I am honored to have been nominated for the award and am grateful for the work James and Aiden have done to help our nation through this crisis,” Pat Scannon said.

Every year there is a national search to select five United States citizens and one organization to receive the Congressional Medal of Honor Society Citizen Honors Award. The Award is given to ordinary Americans who become extraordinary through a single act of bravery or selfless service.

To be nominated, a citizen’s actions must epitomize ”‘service above self” and their actions extend “above and beyond” their professional and vocation area of responsibility.

After the finalists are selected, a second panel made up exclusively of Medal of Honor Recipients will select the finalists to receive the Citizens Honors Awards.

Pat Scannon was nominated for the Congressional Medal of Honor Society Citizens Honors Award for nearly three decades of extraordinary volunteer service to bring our MIAs from past wars and conflicts home.

Pat founded the BentProp Project, now Project Recover, after a trip to Palau in 1993. He saw a 65-foot wing of an American B-24 bomber lying in shallow water along a coral island in Palau. For Pat, the wing represented a forgotten battle and brave men who had fought and died there.

He knew he had to find the rest of the plane and, with it, the stories and the young men lost there that day.

Our Nation makes a promise to those who wear her cloth, that if they fall in service, every effort will be made to bring them home.

For nearly thirty years, Pat Scannon has been committed to keeping America’s promise to bring our MIAs home.

From its inception as a grassroots effort in Palau to now conducting missions around the world, Pat has been persistently leading the charge to find Americans killed or missing in action since World War II and help bring them home.

During that time, Project Recover has:

More and more people have joined Pat in keeping America’s promise to bring our MIAs home.

Pat and the entire Project Recover team welcomes each person — sponsor, partner, donor, subscriber, or follower —  to join the mission.

Americans working together to serve our MIAs with the same commitment and integrity they served us is an honor indeed.