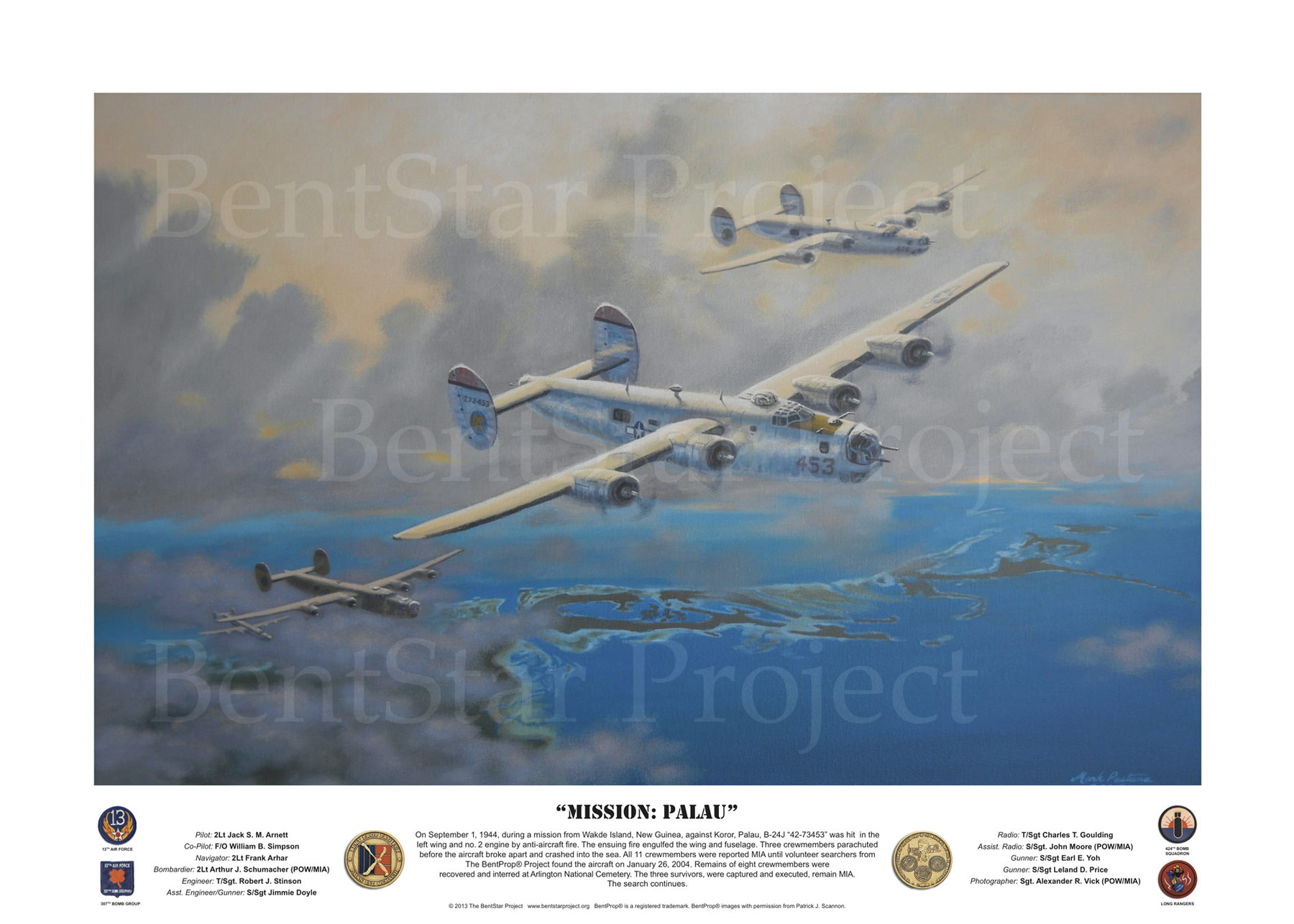 Bring home a real piece of WWII art “Mission Palau” and make a donation to bring our MIA boys home with one click!

Mission Palau, painted by Mark Pestana,  is a one-of-a-kind painting of B-24 ‘453 on its final mission during World War II. The crew and the 10-year search for this B-24 is described with riveting detail in Wil Hylton’s book Vanished: The 60-Year Search for Missing Men of World War II. A 22″ X 28″ Giclée print available for purchase as a donation.

On September 1, 1944, the B-24 ‘453, piloted by 2nd Lt. Jack S. M. Arnett, was hit by anti-aircraft fire as they got over their target. Two blasts struck the left wing causing the number 2 engine to catch fire. The crew salvoed their payload as the fire took over the wing and fuselage. Arnett made a steep turn to the right to attempt to quell the fire. For fleeting seconds, it seemed they were gaining control.

But it was not to be.

The left-wing suddenly folded and broke off the aircraft. The aircraft went into an uncontrollable spin snapping the fuselage in two before it crashed into the sea.

Three servicemen parachuted out before the plane crashed down. It was later determined, they were captured by enemy forces and executed. The remaining eight perished with the plane. The entire crew was declared MIA.

After ten years of searching, the BentProp team (now Project Recover) located the B-24’s crash site on January 26, 2004. The remains of eight service members were recovered from the watery resting place of their final mission. They were repatriated and interred in a group grave at Arlington National Cemetery in 2010. Some were buried back home with their families who mourned them so.

Three service members remain MIA from this aircraft. It is our hope and mission that, in time, they will be restored to their families, too.

Mark Pestana painted Mission Palau in honor of the B24 ‘453 crew and their families.

We search for an aircraft to find MIAs. Find the aircraft, find the missing crew. And so, the aircraft become the symbol of our MIAs. It is in that vein we made these prints of “Mission Palau”, the crew and aircraft of the B24 – 453.

This amazing piece of WWII history is limited to a total of 150 numbered 22″ x 28″ Giclée prints on archival matte paper. Fifty of these prints are artist’s proofs and 100 are standard prints. Once sold out, they will never be reprinted again.

Prints of the paintings are signed by the artist Mark Pestana, Pat Scannon (Project Recover founder whose vision led to finding the aircraft), Tommy Doyle (son of SSgt. Jimmie Doyle who was the nose gunner on this aircraft, and Wil Hylton (author of Vanished).

One of these Historic and rare prints may be yours with a donation to Project Recover. Funds generated with their sale go to support future missions and repatriation of our MIA’s. Be a part of the growing movement to bring our boys home.

Mark Pastana currently serves as a research pilot at NASA’s Armstrong Flight Research Center, Edwards AFB, California. An award-winning artist, his aerospace art is in private, corporate, and government collections, and nine of his paintings are in the Pentagon collection. He also has the unique distinction of designing nine Space Shuttle mission patches for the astronauts. Check out this award-winning and patriotic artist’s website Mark Pestrana Fine Art.