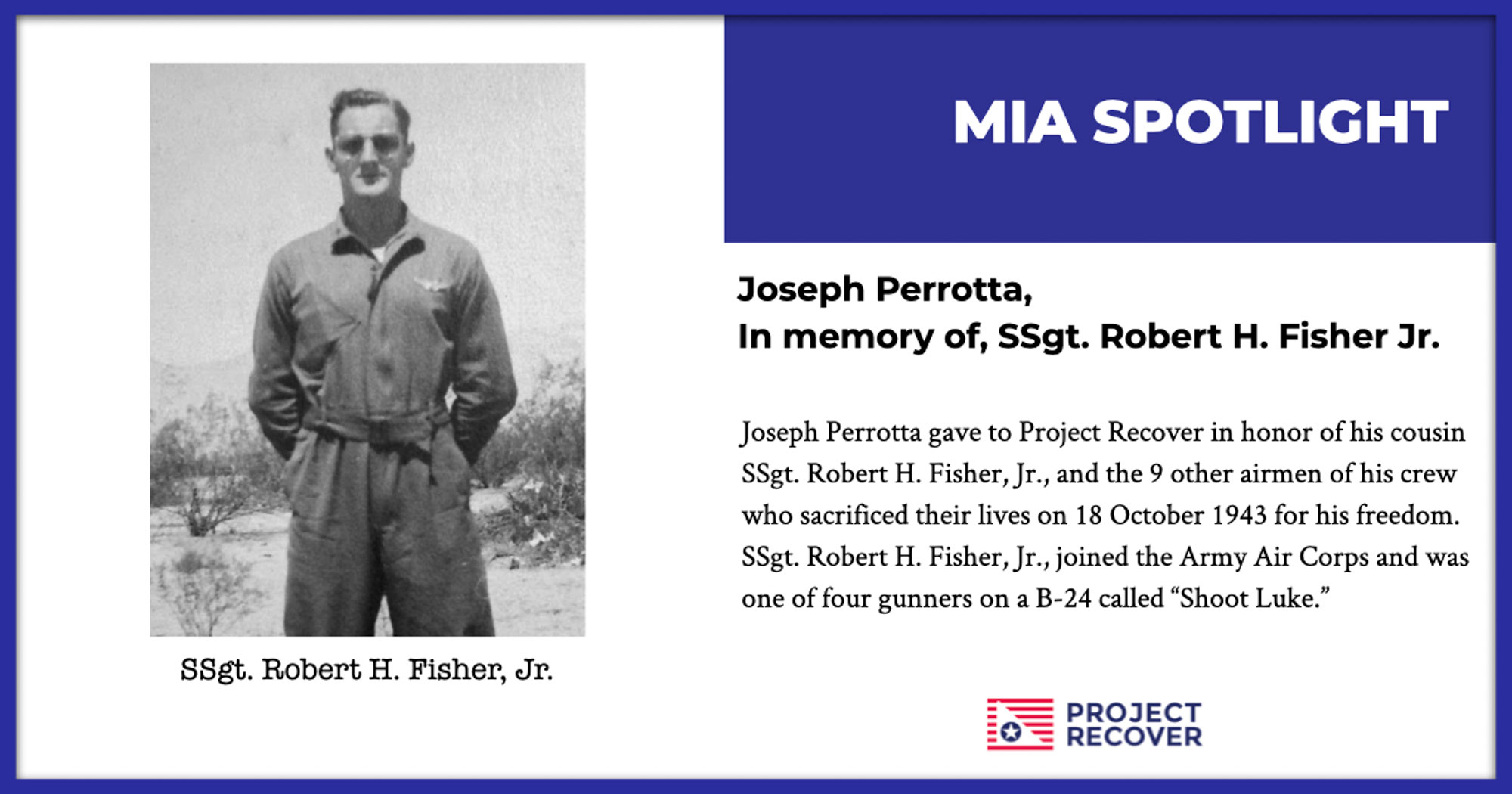 I gave to Project Recover in honor of my cousin SSgt. Robert H. Fisher, Jr., and the 9 other airmen of his crew who sacrificed their lives on 18 October 1943 for my freedom.

As a history and aviation enthusiast, I’ve always idolized the daring bomber crews of the United States Army Air Force who put duty above fear to fight for freedom over the skies of Europe during WWII. However, I never considered that I could have a family connection to one of these brave airmen.

Two years ago, however, I discovered that my Grandmother’s cousin, Robert H. Fisher, Jr.,  was an aerial gunner in the Eighth Air Force and never returned home.  Other than a few pictures of him in uniform, my family knew very few details about what had happened.  I wanted to know more, so I decided to set out on a mission to learn more about this relative I never had the chance to meet.

Robert H. Fisher Jr. joined the Army Air Corps on September 11th, 1942 at the age of 19.  After training stateside, he was assigned to the 93rd Bomb Group based in Hardwick, England as one of four gunners on a B-24 Liberator crew. He flew his first two missions on October 10th and 14th, 1943, which would become known as “Black Week” because of the horrific losses suffered by the Eighth Air Force.

His third mission was to be a diversion over the North Sea. The 93rd Bomb Group’s objective was to lure the Luftwaffe up from their fighter bases and distract them as other bomb groups attacked Duren, Germany.

On the morning of October 18th, 1943, ten men took off from Hardwick Airfield in a B-24D Liberator known as Shoot Luke.  They, along with other Liberators of the 93rd Bombardment Group, were tasked with flying a diversion over the North Sea in conjunction with B-17’s from other bomb groups targeting industrial sites in Duren, Germany.

At around 1:25 pm, over the North Sea, the 93rd Bomb Group was attacked by Me-109’s and Fw-190’s.  Shoot Luke was last seen diving for a cloud layer with fighters on its tail.  The crew is still considered missing in action and each airman is commemorated on the Tablets of the Missing at the Cambridge and Netherlands American Cemeteries.

My continued research has brought me into contact with numerous families of other crew members and even nephews of the very Luftwaffe pilots that intercepted the bomber formation on that fateful day.  I have been witness to the collective sadness of later generations affected by the loss of these men. It makes me realize how important it is that we remember and honor their sacrifice.

By supporting Project Recover, I feel as though I am doing my part to bring closure to the families of our missing soldiers. At the same time, I am honoring the memory of my family’s own hero, SSgt. Robert H. Fisher Jr.  Though he may still be missing in action, I hope that my actions will ensure that his story lives on forever.

Many thanks to Project Recover for its efforts in recovering America’s missing heroes, and to all those that support this cause

Joseph Perrotta made a donation to Project Recover in honor of his cousin SSgt. Robert H. Fisher, Jr., and contributed this story for Project Recover’s MIA Spotlight series.