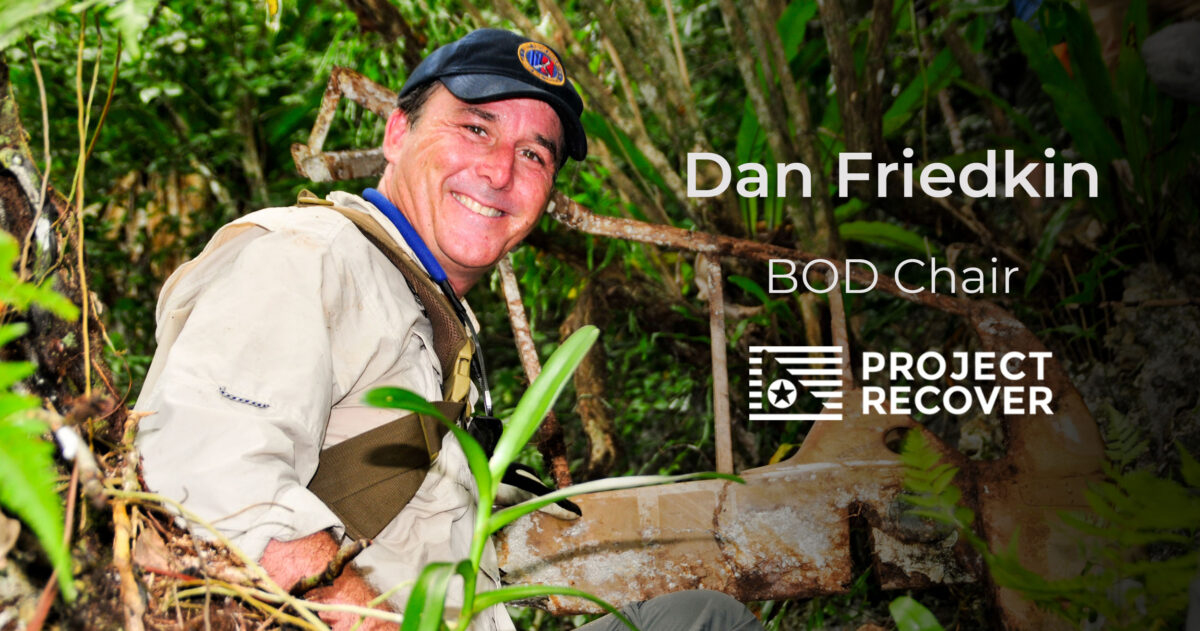 Dan Friedkin is a pilot and an avid warbird enthusiast. His first encounter with Project Recover came in 2014.

Dan was in good company on that 2014 mission. There were many distinguished visitors on that mission, including:

Dan Friedkin, Producer, To What Remains

Dan saw the potential for an inspiring documentary about bringing our MIAs home during his first mission with Project Recover and arranged for a film crew to document the mission.

In 2015, Dan joined the Project Recover team again. Convinced he had the basis for an inspiring documentary, he brought another film crew with him. He hiked with the team through the jungles of Palau and did scuba dives on multiple potential sites. He was with the team when they found the crash site of a TBM Avenger. Dan Friedkin became a team member at the end of the PMAN-XVII mission.

Dan recently completed the documentary he started filming on his first trip to Palau. To What Remains is in the process of distribution across the country. Check our “To What Remains” Movie Page for streaming information.

Dan Friedkin is chairman and CEO of The Friedkin Group, a privately held and diverse consortium of businesses and investments in the automotive, hospitality, entertainment, sports, and adventure industries. Among its businesses is the Gulf States Toyota, one of the world’s largest independent distributors of Toyota vehicles and parts, serving more than 150 dealers in Arkansas, Louisiana, Mississippi, Oklahoma, and Texas. Under Dan’s leadership as chairman and CEO, Gulf States Toyota has grown into one of the largest private companies in the U.S. Additionally, Dan is the owner of Ascent Automotive Group, a retail platform that owns and operates automobile dealerships; GSFSGroup, a leading provider of F&I products and award-winning reinsurance structures to the automotive industry; and US AutoLogistics, a premier OEM automobile transportation logistics company.

Dan is the principal and co-founder of Imperative Entertainment, an innovative entertainment studio located in Santa Monica, CA that develops, produces, and finances original and branded entertainment focusing on film, television, podcasts, and documentaries. At Imperative Entertainment, he has served as an executive producer on the Academy Award® nominated and Palme d’Or® winning film “The Square” (Ruben Östlund, 2017 Cannes Film Festival), a producer on the Academy Award® nominated “All The Money In The World” (Best Supporting Actor, directed by Ridley Scott) and a producer of “The Mule” (Directed by Clint Eastwood). Dan also directed “The Last Vermeer,” which tells the story of artist Han van Meegeren (played by Guy Pearce), who created and sold forged paintings to the Nazis during their occupation of the Netherlands. The film was released in 2020.

In 2017 Dan co-founded 30WEST, which provides capital and strategic guidance to high-caliber creative projects and forward-thinking companies operating throughout popular culture. Dan and 30WEST continued their Hollywood expansion in 2018 by acquiring majority ownership in NEON, one of the most coveted theatrical marketing and distribution companies in the independent film space. In 2019 NEON was responsible for Parasite, winner of four Academy Awards®, including Best Picture and Best Director.

Dan serves as chairman of AS Roma, a role he has held with the storied Italian football club since 2020. With more than 90 years of history and millions of supporters around the globe, AS Roma has consistently competed for titles at the Italian and European levels.

Since 2013 Dan has served as chairman of Auberge Resorts Collection, a portfolio of owned and managed award-winning luxury resorts, hotels, and vacation properties in the U.S., Europe, Mexico, Costa Rica, Caribbean, and Fiji. He is the owner of Diamond Creek Golf Club in Banner Elk, NC, ranked by Golf Digest as one of America’s 100 Greatest Golf Courses. Additionally, he is the majority owner of Congaree, a golf club in Ridgeland, SC, designed by renowned architect Tom Fazio and developed around a philanthropic model of providing educational and vocational opportunities for underserved and deserving youths through a shared passion for golf.

Profoundly committed to conservation, Dan leads a number of conservation and environmental initiatives in Texas and East Africa. He is Chairman-Emeritus of the Texas Parks and Wildlife Commission, the state agency responsible for managing the wildlife, cultural and natural resources of Texas. He is also a trustee of the Wildlife Conservation Society and advises on other conservation-oriented initiatives and serves on the advisory board of The Caesar Kleberg Wildlife Research Institute. In East Africa, Dan oversees the Friedkin Conservation Fund, a charitable organization established to conserve the wildlife and wilderness across millions of acres in Tanzania’s protected areas.

A skilled pilot, Dan flies a variety of high-performance vintage military aircraft, performing in aerobatic airshows across North America and Europe with the U.S. Air Force and the Horsemen P-51 Flight Team. Dan is one of only nine civilian Heritage Flight pilots qualified to fly in formation with U.S. Air Force single-ship demonstration teams. Additionally, he is the founder of the Air Force Heritage Flight Foundation, a non-profit organization established to honor the men and women of the U.S. Air Force through Heritage Flight displays. Dan is also Chairman of Project Recover, a public-private partnership dedicated to locating aircraft and Americans missing in action since World War II.

Dan holds a bachelor’s degree from Georgetown University and a master’s degree in finance from Rice University.