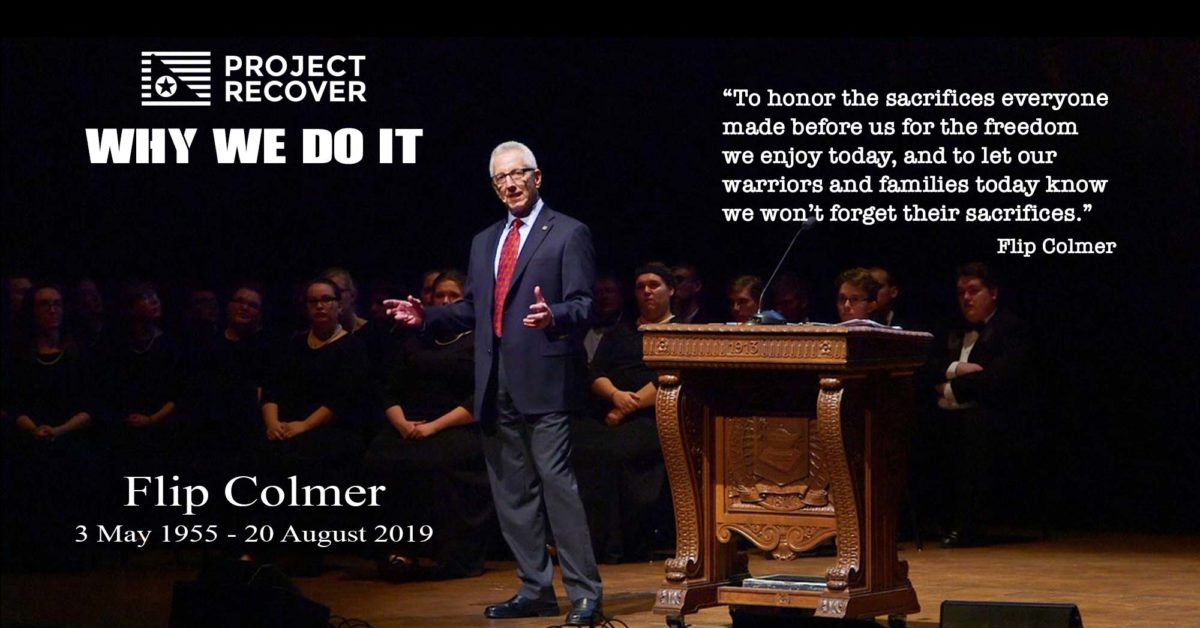 On August 20, 2019, our beloved teammate, Flip Colmer, died unexpectedly in a small plane accident in Livingston County, Michigan. He was 64 years old.

Flip was solid, unpretentious, and rose naturally to the Project Recover mission as though it was his calling to serve others who had fallen before him.

Flip Colmer had much to be proud of, and wore his accomplishments with an ease of being. He had nothing to prove; his life spoke for itself. He was not vulnerable to ego. Instead, he had a boyish way about him. Playful and fun, Flip had a wicked sense of humor, and an infectious smile. Still, he was solid, reliable, and open to his own evolution as a man and contributor to society. He was a living testament to the Project Recover values which were naturally his own: responsible, respectful, humble, and imbued with integrity.

He was on the Project Recover (formerly The BentProp Project) Board of Directors since its inception. As a retired US Navy Lieutenant Commander, a Naval Aviator, and a command pilot for Delta Airlines 757/767s, Flip brought an extensive knowledge of aviation, aircraft, and military history to the team. However, Flip’s presence — who he was, what he stood for, and how he did so in a manner that brought out the best in his fellow team members — was more valuable than even the vastness of his aviation expertise.

Flip Colmer was our valued Project Recover teammate and family to those who grew The BentProp Project into the entity it is today.

“Flip had a direct impact on what has become the identity of Project Recover. His innovative approach and cheerful demeanor created an atmosphere that encouraged others to share their own thoughts and ideas. After weeks of hard work in the jungle, you could always rely on Flip to raise your spirits and keep you focused on the mission. I learned a lot from Flip on what it means to be a contributor to Project Recover.”

Flip Colmer cared deeply about the mission to bring MIAs home. Shortly before his death, he spoke about his work with Project Recover at the Fisher House, Michigan.

Do We Get Paid?

Flip said that he and the team were frequently asked two questions.

In the early days, all of our team members were volunteers. From Pat Scannon, Project Recover founder, to every member of the board, people paid for the travel costs and took vacation time to search for our MIAs. As Project Recover has gotten more funding, the organization has been able to offset the travel cost for our volunteers as well as fund some expertise, but volunteerism remains at its core.

Flip Colmer gave his time generously. Just before he died, he explained that he did get paid, but not in a way most people expect. Since Flip joined Project Recover, he experienced the repatriations of 13 WWII MIAs and attended the funerals of five.

“Do we get paid to do this? Yes, we do. But not the way you probably think. It happens in a funeral home. Maybe at the church Certainly at the gravesite. (But) A family member will come up and say “thank you.” It may not be a direct relative. It could be distant (relative who) knows the stories only. But ‘thank you.’ And that’s gold.“

When Flip began with Project Recover he was active duty with the U.S. Navy flying the F/A-18C Hornet.  Just over half of Project Recover members are either a veteran, active duty military, or first responder. Flip was commissioned as an officer in 1978 and earned his Gold Naval Aviator Wings. He served in the Active ranks and Reserves as a carrier pilot, flying the A-7E Corsair and F/A-18C Hornet jets before retiring from the Reserves in 1998 with the rank of Lieutenant Commander.

For Flip, bringing our MIAs home had to do with honoring those who had come before him as well as keeping a promise to those currently serving.

“So why do we do it …. First off, it is to honor the sacrifices that everyone has made before us so we could have the freedoms we enjoy today. (We want to) try and make some closure for the families who have a hole, an empty place at the dinner table. (We also want) to tell the warriors and families today that we won’t forget the sacrifices they are making for us right now.”

Flip Colmer developed Project Recover’s first educational initiative with Stockbridge Underwater Robotics Team. At the time, the team was searching for years using extensive historical research, interviews, and diving to find WWII crash sites in the water. It was labor-intensive. It was not uncommon for the team to search for years before finally finding their target. They were in dire need of a more efficient method of searching.

In the spring of 2011, Flip had just returned from a mission in Palau searching fruitlessly for elusive plane wrecks when he read about the Stockbridge High School underwater robotics team. They had just won at the Great Lakes Regional ROV Competition and were preparing for an upcoming competition at MATE (Marine Advanced Technology Education) International ROV Competition at NASA’s Neutral Buoyancy Lab (NBL) in Houston Texas.

Exhausted and blurry-eyed from jet lag, Flip bounced off the couch and called the superintendent of the small rural school district. He wanted to know if Robert Richards, the Business and Technology teacher, and the underwater robotics team would build a Remote Operating Vehicle for Project Recover (the BentProp Project).

Among his many roles with Project Recover, Flip Colmer was the keeper of the MIA’s ceremonial flag. Each time Project Recover locates a downed WWII US aircraft, a flag ceremony is held either over a water loss or beside a land loss. A flag is folded for each of the associated Missing in Action service members, and “For the Fallen,” a poem by Laurence Binyon is read.

At the end of the ceremony, the flag is given to someone to keep until it can be delivered to the next-of-kin. The selected person safeguards it throughout the time it takes for DPAA to recover and identify the remains; a process that can take years. As a US Navy officer, Flip was one of those people.

On a Personal Note

On August 26, 1994, he married Rebecca Sharp, his best friend, fellow skydiver, and beloved travel companion for the remainder of his life. Flip is survived by Rebecca, his two sisters, Barbara Colmer and Amy Ream, his sister-in-law, Samara Anjelae, and his two brothers-in-law, Michael Sharp and Lew Sharp.

As we grieve the loss of our friend and teammate, our hearts are with his wife and family as they now have “an empty place at the dinner table.”

Pat Scannon, Project Recover Founder, expresses the sentiments of our longest-serving members who began as a small dogged group searching for MIAs in the vastness of the Pacific Ocean.

“I had the joy of working intensely with him for over 15 years, which was far too short a time. Although I miss him every day, his spirit is now, and will remain, a permanent part of me.”

It seems fitting that we say farewell to our friend with a stanza from the same poem we’ve read together many times in a small boat on the blue waters of Palau – in honor of those who have fallen before us.

They shall grow not old, as we that are left grow old:
Age shall not weary them, nor the years condemn.
At the going down of the sun and in the morning
We will remember them.
Laurence Binyon